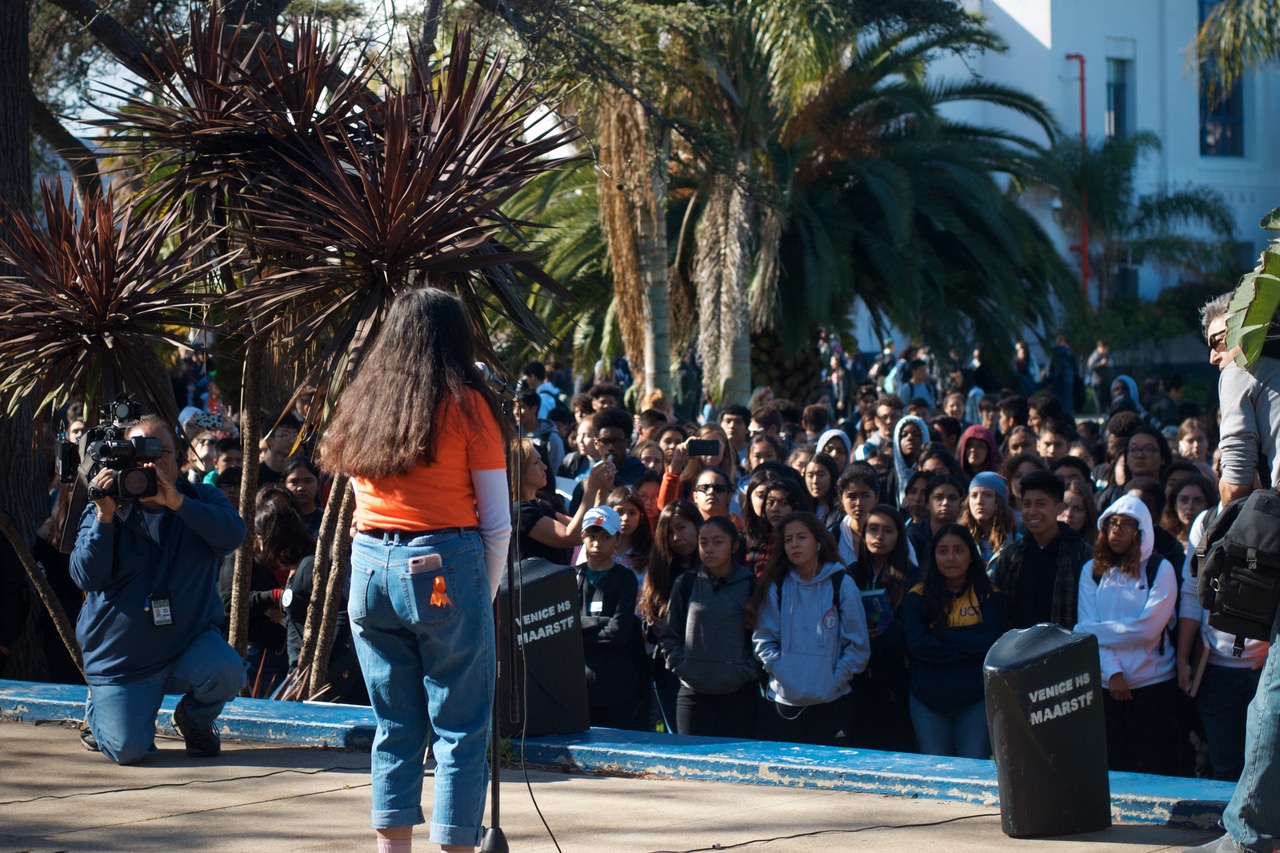 At 10 a.m. Wednesday morning, over 500 Venice High School students flooded the school’s front lawn protesting gun violence as part of a nationwide walk out. Holding signs with phrases like “Enough” and “Make America Safe Again,” the students performed a 17-minute walk out, one minute for each victim of the shooting in Parkland, Fla., exactly one month ago.

“There is a broken system and obviously something has to be done. Nothing is ever going to change if we just keep giving people things that give them the power to keep killing,” said April Cuarenta, a student who helped organize the event at Venice High School.

“It is really touching to see the names and students here. It kind of makes you think of what can happen and how much you can lose,” said Keegan, a 10th grader.

Many in attendance were wearing orange shirts and ribbons. The March for Our Lives movement uses the color orange because it is the color people wear when in the woods to avoid getting shot by hunters. Volunteers in orange set up tables where students could write condolences to members of the Parkland community, draft letters to lawmakers, and register to vote.

Since the Sandy Hook shooting in 2012, there have been over 7,000 children killed by guns. There have been almost 300 school shootings since then, at a rate of almost one per week. In the light of these harrowing statistics, students at the protest were not only paying tribute to the Parkland victims but also demanding action from politicians.

Of particular concern to students was President Trump’s proposal to arm teachers, which one student said will only make classrooms “more dangerous.”

“We should not fight fire with fire. We shouldn’t give guns to teachers because it is not going to help the case at all,” said Maya Gates, a student and protest organizer.

It was not all students at the protest, many parents and local lawmakers were in attendance as well showing their support. Mother and Venice activist Nisa Kove was saddened that protests like this are necessary, but encouraged by the power these students have.

“I hope these kids understand the responsibility and the power they have,” Kove said.  “If they can take this to our Capital, we can do something.”

While students were encouraged by the turnout, they made clear that there is still an uphill battle ahead, and that there is no time for complacency. On April 20th, students across the country will leave school for the day on the anniversary of the 1999 Columbine Shooting, and Venice High School Students are planning another protest for this day as well.

“We are going to schedule something just to further prove our solidarity for stopping gun violence,” Gates said.