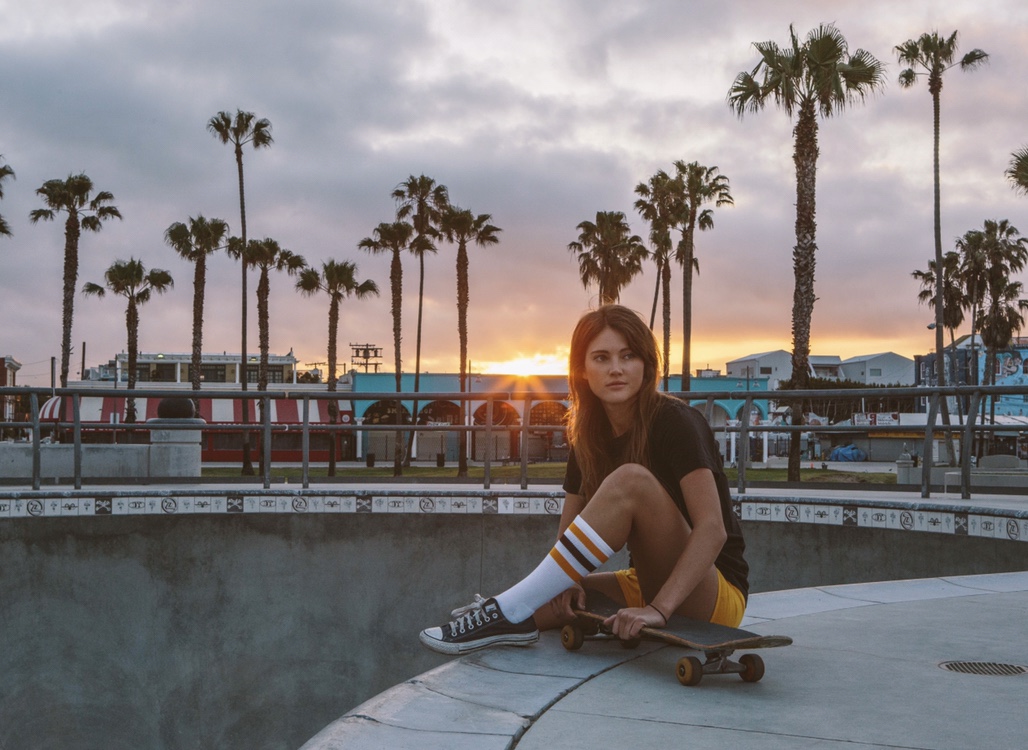 As an acting teacher, it’s a joy when someone comes through the door with a need to express himself or herself, whether they are a beginner or a seasoned actor. Last year, Ashley Riley reached out to me regarding my acting studio at the Electric Lodge, right here in Venice. We connected immediately as her vulnerability, talent, intelligence, empathy, humor, and compassion were evident in an exercise I assigned her. I was excited to be of service on her newfound journey as an actor/artist.

And today, I’m equally excited, as Ashley is a fantastic role model for actors and artists with her discipline and ability to revel in the joy of living a life that is not defined by acting, but instead, a life she is defining for herself.

In the studio, I ask specific questions based on the needs of each actor, rather than directing or telling someone what they need to do to be successful or how to get the scene ‘right’. In this way, actors are given the possibility of thinking for themselves and ultimately making decisions on their own and carving out the imagined life as opposed to a “should-filled” life.

“Acting is doing, and the doing requires practice.”

However, that’s not to say I won’t nudge or challenge an actor to push through their comfort zone. Ashley knows that being an actor requires becoming comfortable with being uncomfortable. Not to mention how liberating and profoundly gratifying it is when you commit to exploring the human condition, warts and all.

Recently, Ashley and I sat down at GTA on Abbott Kinney to chat:

Ashley: I need to be an artist and want acting to be my medium of expression.

Guy: What does acting provide for you?

Ashley: Acting provides me with an outlet for self-discovery. Through the characters I play, I get to know myself better. It also provides me with a freedom to do something that I wouldn’t usually do in my life.

Guy: At present, who are you in the world?

Ashley: I’m a kid in an adult body learning to navigate through whatever comes my way. This year has challenged me to consider how I’m showing up and I can say that so far I’m a compassionate truth seeker who leads an art-filled life drinking good coffee, acting, skating, dancing, and listening to rock and roll. Oh, that and living by Patti Smith’s quote; Believe or Explode, which I have tattooed on my wrist.

Guy: Nice… when I grow up, I want to do that too, not get a tattoo, but the other things you listed. But, don’t get me wrong; I dig Patti Smith’s music, plays, and books. Okay, what do you have to give as an actor and what do you want back from acting?

Ashley: Umm, I want to permit people to be vulnerable and fully expressed. When you see others being vulnerable, it gives you a sense of “Oh, I’m not alone in this, I can be vulnerable too.” It’s like going to a wedding where nobody has started dancing yet, but it only takes one person, and soon everyone is out there on his or her feet. What I would like back from acting is the opportunity to visit places I’ve never been, literally and figuratively.

Guy: What is it about Venice that you like most?

Ashley: The incredibly beautiful community of artists, freethinkers, healers, and funky bohemians. Venice feels like home to me; these are my people.

Ashley: The cost of living.

Guy: It sucks! On that note, what have you done for your art lately?

Ashley: Yesterday, I went to the library and checked out a stack of plays to read and today I danced my butt off at 5Rhythms Dance in Santa Monica.

Guy: I’ll save that for when I really grow up. In the meantime, I’ll keep surfing and reading plays. What is your definition of intimacy?

Ashley:  When two people have an authentic connection without judgment.

Guy: You got that from an acting class! Okay, then what role does authenticity play in your life?

Ashley: Authenticity to me is the truth, and truth to me, is everything.

Guy: Boom! Thanks, Ashley and I’ll see you Wednesday.

Guy Camilleri is a Venice-based actor, acting coach, and poet. He teaches regular classes on Monday and Wednesday evenings at the Electric Lodge, in Venice. His private coaching specializes in creating characters for film, television and stage, audition preparation, self-taped auditions, original reels and career consultation. To audit, enroll in a class or book a coaching session, go to www.guycamilleri.com. Follow Guy on Instagram @guycamilleri and Facebook.