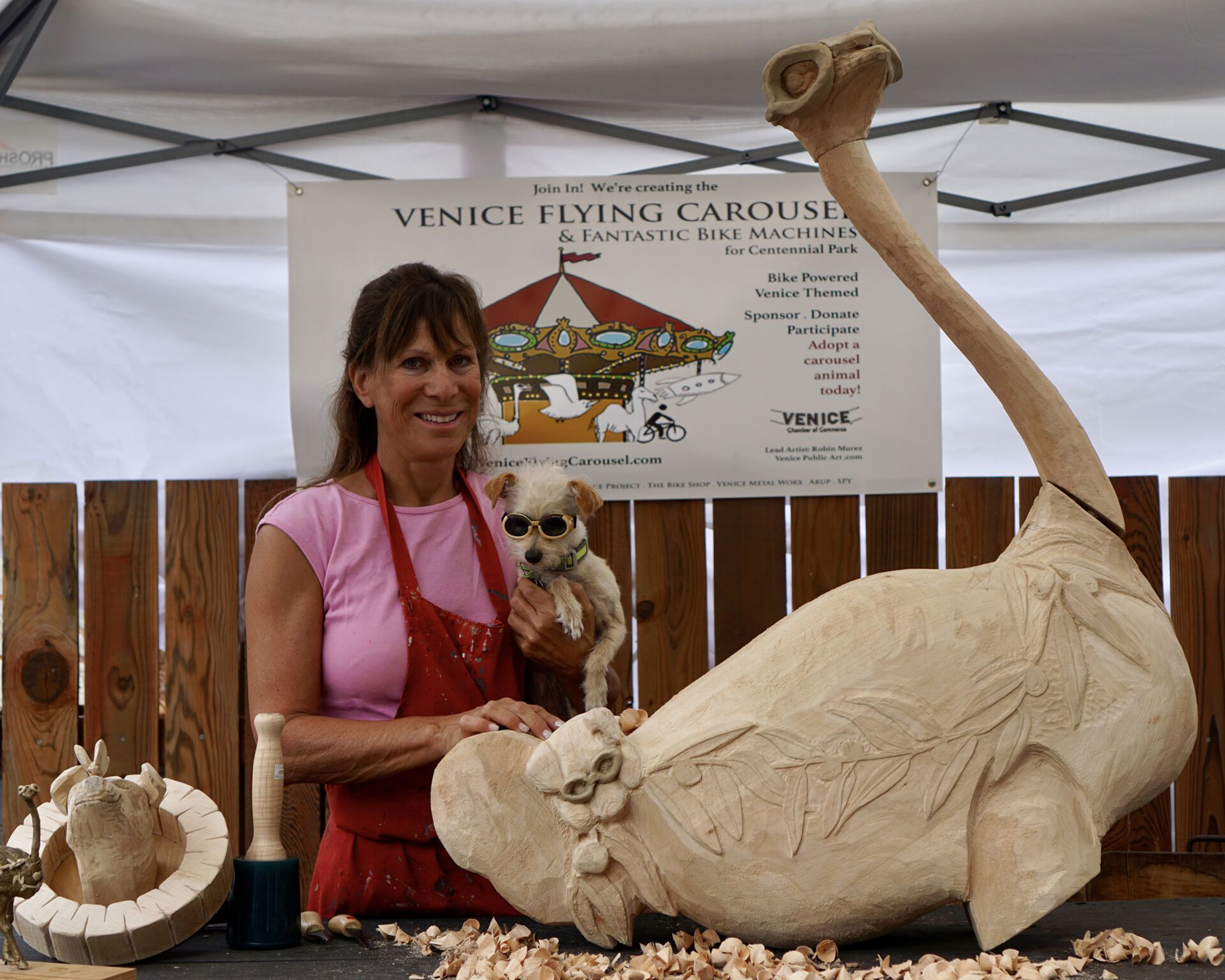 From her peephole box to her camel topiaries, local artist Robin Murez has spent the last ten years creating interactive and story-based works all over Venice. She greatly enjoys sharing Venice’s colorful history with the public and has even created a tour guide to all her art pieces, just a walk away from one another.

The Venice Place Project is sponsoring the Venice Flying Carousel by way of providing a workspace for Murez in its Pop-Up Park “where I carve and host carousel events,” Murez told Yo! Venice. The public space at 250 Broadway Ave., just off Abbot Kinney Blvd., is equipped with wi-fi, outlets, and tables. “I’ve always had a public studio. And I love the interaction with the public. Stop by to see me carving and join in on the project,” she said.

Using the Flying Carousel, Murez has devised a plan to turn Venice’s Centennial Park “into a place of joy and community.” Running from Abbot Kinney Blvd., to the Venice Public Library on an island sandwiched between Venice Blvd., North, and South, the park goes largely ignored and with the lack of benches and visitors, feels a bit unwelcoming. But, within proximity to the library, farmers markets, and Abbot Kinney, Murez believes the park has great potential with the carousel.

The proposed Flying Carousel will be 30-feet in diameter, holding 15 riders (yes adults, you’re welcome to ride too). Bike-powered and solar-lit, the carousel can be operated by a single person and run into the evenings. Total costs are estimated to reach about $200,000. Wrestling for grants and funding to cover construction, installation, permits, potential licensing fees, insurance, and the other hidden fees that are sure to come her way, Murez hopes to underwrite the rest of the balance with her Adopt-a-Carousel idea. A tradition in carousel building, a dozen people or so will have the opportunity to adopt a carousel animal of their choice or create one. Donors can help in the design and naming of the animal and have their own personal touch engraved into what will be Venice history.

The carousel has received widespread support. “Everyone I’ve told it to loves the idea,” Murez said. Projected to be finished by 2019, she is currently at the stage of carving the animals and working with the city and the Department of Recreation and Parks to commence construction.

Taking influences from the Oregon Albany Carousel and The Davis Dentzel Carousel, Murez is determined to handcraft the sculptures. She started her first carving in April working on an ostrich laced with eucalyptus leaves on its side. During the establishment of Venice, Abbot Kinney commissioned ostrich farms on Windward Avenue, a lesser-known fact about Venice that she wants to share. And seated on the back of the ostrich is her dog, Astro, donned with goggles.

Some of Murez’ other carousel creature ideas include a turtle, symbolizing the Tongva tribe and creation of California, a rocket in honor of Ray Bradbury and science fiction, a guitar referencing Jim Morrison and the Doors, and a winged lion. The Winged Lion of Saint Mark is the symbol of Venice, Italy, where Abbot Kinney often found inspiration. Later, when building his Venice of America, he sculpted lions onto some of the Italian architecture archways and columns.

Murez has already begun involving the community. Safe Place for Youth (SPY) have helped with the landscaping and weeding of the park., and Murez has plans to engage the public at any point she can. When asked why she wanted to do this project she said, “The essence is really telling these stories, and having there be a sculptural element that brings out these stories. It will be this happy, beautiful, cool thing that brings out history and art and alternative technology.”

Donate, participate, and find out more at veniceflyingcarousel.com or venicepublicart.com and follow Yo! Venice for updates.