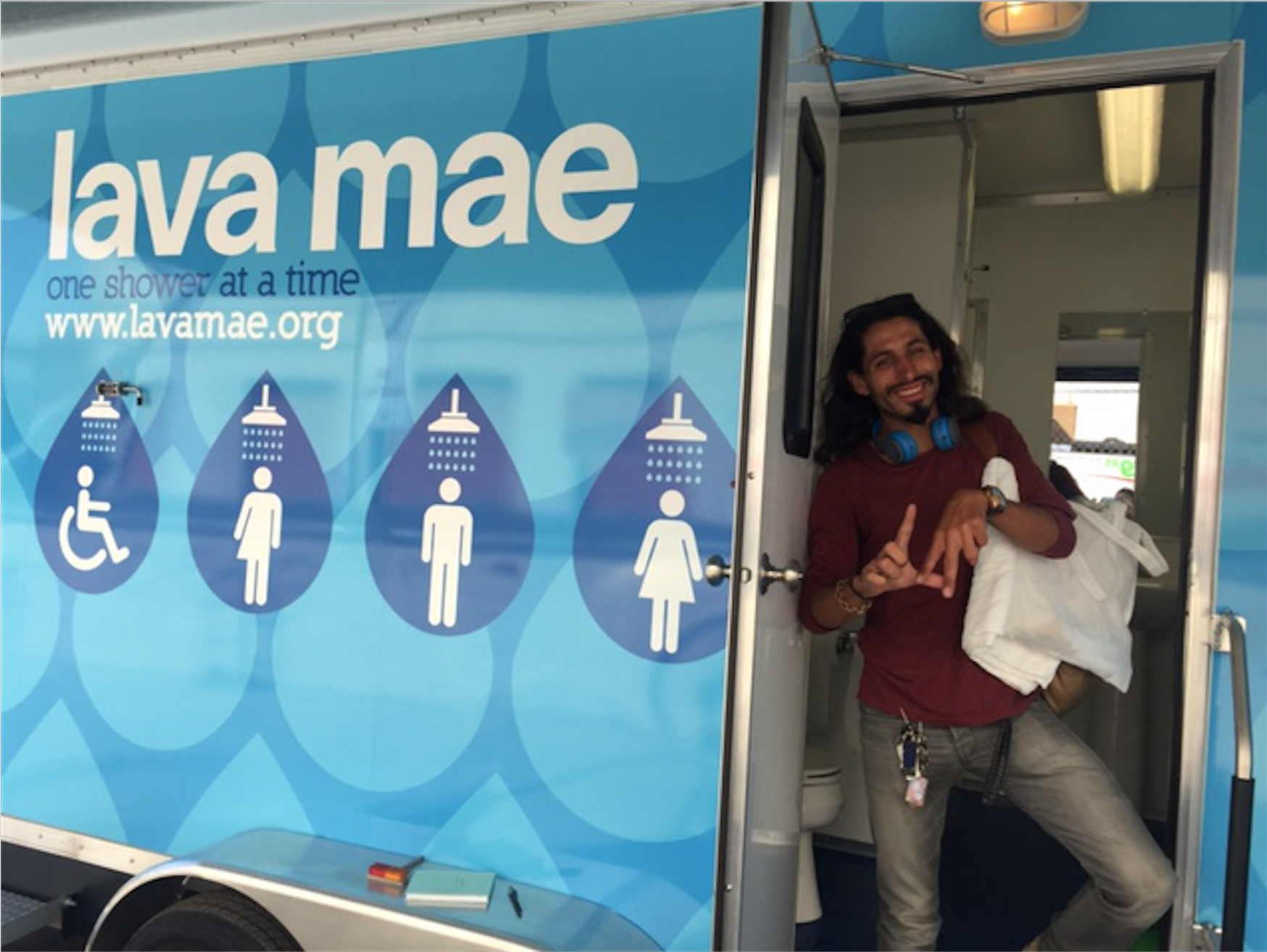 There is something new on the streets of Venice Beach. It’s called Lava Mae, and it provides a space for the local homeless community to wash. However, organizers say it does a whole lot more than that. After it’s Venice launch on Tuesday, November 15, the non-profit has committed to sharing the power of a shower every Friday morning with the neighborhood’s homeless.

Lava Mae is a mobile hygiene service for those who don’t have access to the basics, like toilets and showers.

“I wash in a carwash sometimes, but it’s very nice a truck came here today,” says Maria. Homeless since February this year, Maria has been camping on Rose and 3rd Ave. She shares, with Yo! Venice, the story of the time she commandeered the help of a man at a carwash.

“It’s like the kind you put the quarters in, and I just said, ‘excuse me, sir, could you please rinse me off, ‘cos I had all shampoo and conditioner and stuff. So he goes, ‘this is going to be, powerful. I don’t know if I should do that.” I go, ‘just rinse me off,’ and he washed all the shampoo off for me.”

Jasmin Mouflard-Kozowy is Lava Mae’s director here in Los Angeles. She says, “basic access to showers is so important.” A social entrepreneur and filmmaker, Mouflard-Kozowy previously worked on refugee crisis issues in Afghanistan.

Patty is also homeless in Venice. She says the Lava Mae mobile showers were a welcome surprise. “We got loud. We were excited. It was great.” Her ice-blue eyes well at the anticipation of taking a hot shower. “I shower every day. We don’t have hot showers. All we have is cold. Hot water cleans the dirt off you better, and it’s just good for your body,” she says.

With the showers in demand, Patty waits her turn, explaining what access to hot showers means to her. “It makes you feel more human. Like somebody cares,” she says.

Mouflard-Kozowy beams as she talks about what she’s witnessed through Lava Mae. “We automatically see the difference. I see people come in and out, and I’ve actually had people where I haven’t recognize them coming out of the shower.”

The privately-funded, non-profit has been a success in San Francisco, where over 2400 have taken more than 14000 showers since 2013. Unilever, Google, and Kohler have stepped up as corporate partners.

“At Unilever, we believe in the transformative power of a shower, and making showers accessible to everyone,” says Unilever’s Nick Soukas, Vice President, Unilever Skin Cleansing USA.

A way of serving people moving through homelessness, as much as it’s about rekindling dignity, Lava Mae also aims to connect people with the groups who can help them. Like PATH, St Joseph’s, and Safe Place for Youth. This is good news for people like Maria, who says she has tried to get off the street but admits it has been hard as she struggles with alcoholism.

Project Narnia is another Lava Mae Partner. Founders Elizé Todd and Caitlin Adler discovered that many charities receive an abundance of good quality clothing that they can’t always use.

“We work with local charities like Chrysalis and Dress for Success. We take their unwanted donations, and we redistribute it between the charities and then we do popups like this with Lava Mae,” says Adler.

Patty tears up again, moved by Project Narnia’s generosity. She searches through the rack of clothes, pulling out a blue blouse that matches her eyes and a warm, polar fleece sweater. Maria has scored clothes too. “If you come up to take a shower and you don’t have clean clothes, it sucks to take a shower and then get out of the shower and put on dirty clothes,” she says.

Lava Mae also provides razors, soaps, shampoo, and towels. “You walk up here with nothing, and you leave feeling clean, good, and feeling better,” says Maria.

Fresh out of her shower Patty is glowing. She’s wearing her new blue blouse. “I feel awesome,” she smiles and laughs.