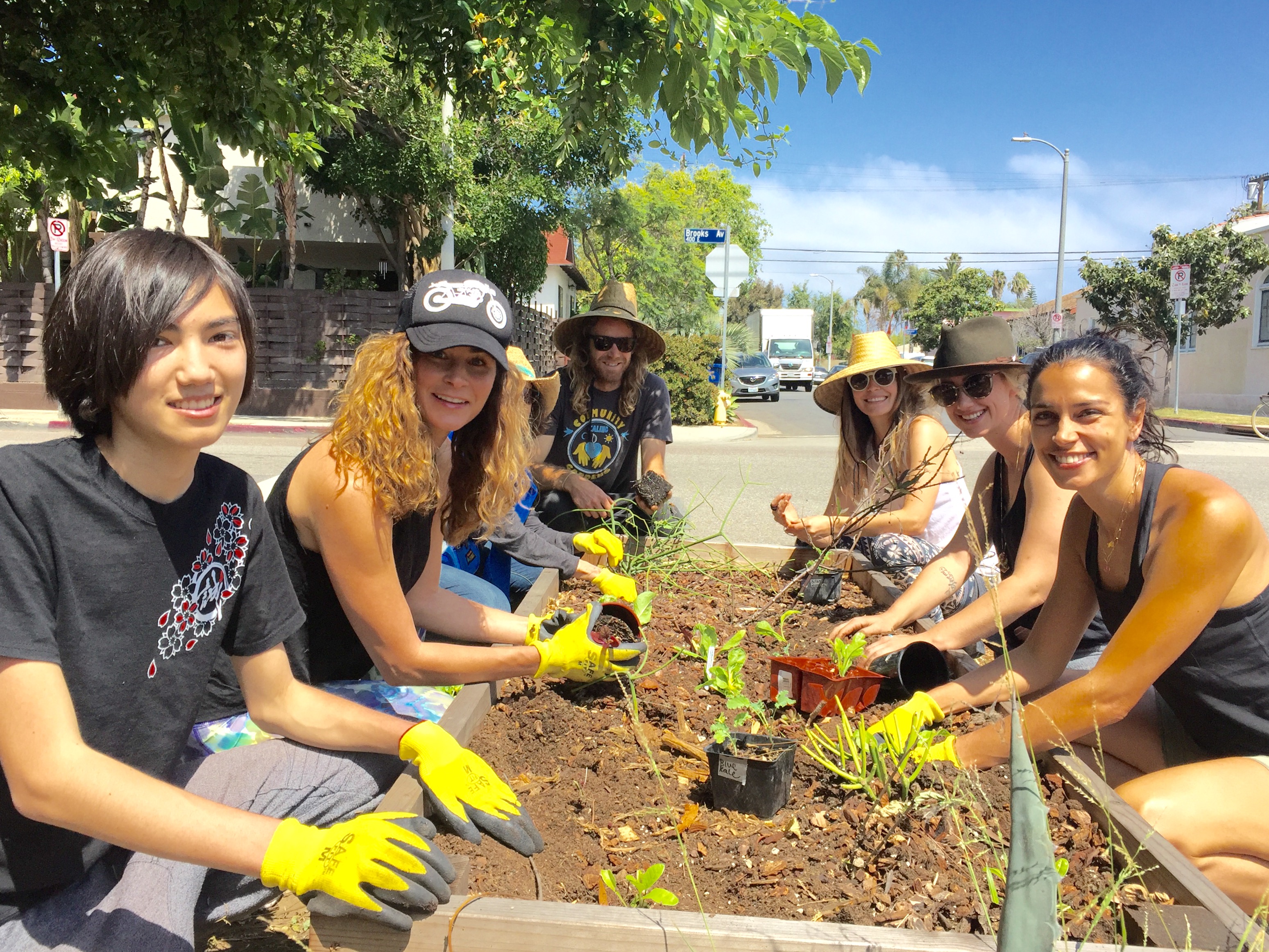 Volunteers gathered in the streets of Venice for Community Healing Gardens’ all hands-on-deck Coffee and Dirt Planting Party on Saturday April 30. The non-profit organization that launched in Venice on June 13 last year, creates urban gardens to provide sustainable, nutritious food to diverse and underserved communities.

Venice local Nicole Landers explained that the gardens came about after she and neighbor Grant Gottfurcht, who runs the Yoga Collective on Rose Ave., “got together with a bunch of friends last summer for a social experiment. To see what would happen if we put garden boxes on the streets of Venice and see who would come out and garden with us and get involved with our community that’s been so gentrified.”

Matthew Van Diepen runs Homegrown Gardens in Venice. His nursery provides seedlings for Community Healing Garden’s projects. “We started last summer and over a series of weekends we went down 7th, and then 6th, and 5th, and 4th and put out about 20 to 30 boxes each weekend with 50 to 100 volunteers each time,” Van Diepen said.

He added that with winter behind them “some of the boxes have fallen by the wayside so now we’re going back through with a bunch more people to revamp them and get them going for the spring so that hopefully in another couple of months there’ll be an abun- dance of food for everybody to come share.”

Regina lives in Santa Monica. She discovered the gardens while taking a walk down 4th.“I saw the tubs with these veggies growing in them and it was so wonderful. I thought, ‘who’s doing this!’ Then I saw the sign, Community Healing Gardens. So I looked it up online and I saw that they’re doing this amazing project, growing veggies in boxes all over Venice and they’re veggies for anyone who wants them and I thought that was so, so cool.”

While the gardens are for everyone in the community, not everyone realizes this. Virginia, who has a box on the corner of her street was excited to hear she could help herself to strawberries. She said earlier in the year she had chased a man away who was picking kale telling him he couldn’t because she thought the food was only for low income families.

Landers told Yo! Venice that there is plenty for everyone. “If you see some fruit and vegetables you want, take some. Just be sure the strawberries are red, the blueberries are blue, and if you’re going to take a piece of kale or collard that you break it from the bottom of the stalk. Don’t pull up the roots.”

On communityhealinggardens.org the group hosts videos on how to best harvest fruits and vegetables from their boxes.

Even with neighbors helping themselves the garden boxes provide a bountiful harvest that is abundant beyond greens, “we’re working with a couple of non-profits in the community. Dharma Kitchen and Safe Place for Youth (SPY)” said Landers, explaining that Community Healing Gardens employ young people through SPY to maintain and water the gardens.

James, who has been working for the organization is keen for people to know that the water they use is not pulling from precious city reserves. “People will yell at us as they drive past saying, ‘don’t you know there’s a drought?’” Landers explained that the boxes are very drought friendly.

“Some neighbors are taking ownership and watering the boxes which isn’t taking that much water. We water twice a week, there’s mulch, there’s good compost, so you don’t have to water as much. And then, the secret sauce? We pull water from David Hertz the architect. He has a machine called Sky Water and his company is called Sky Source and it makes water from humidity.

120 gallons a day. Right here in Venice on Market Street.”

The garden boxes was the organization’s first project and the idea was to expand it throughout Los Angeles however the focus grew in a different direction that has seen the group take root in school gardens. “We’ve been working out in Watts with a junior high school and an elementary School. The elementary school, we did a kind of similar thing with the boxes and then for the junior high school they have an acre and a half plot that had been neglected for many years…so we’ve been helming them to get their garden going again,” said Van Diepen.

With that kind of connection, the Community Healing Gardens is sure to keep on growing.

By Melanie Camp May 16, 2016
Tags: featured in Opinion
Related Posts