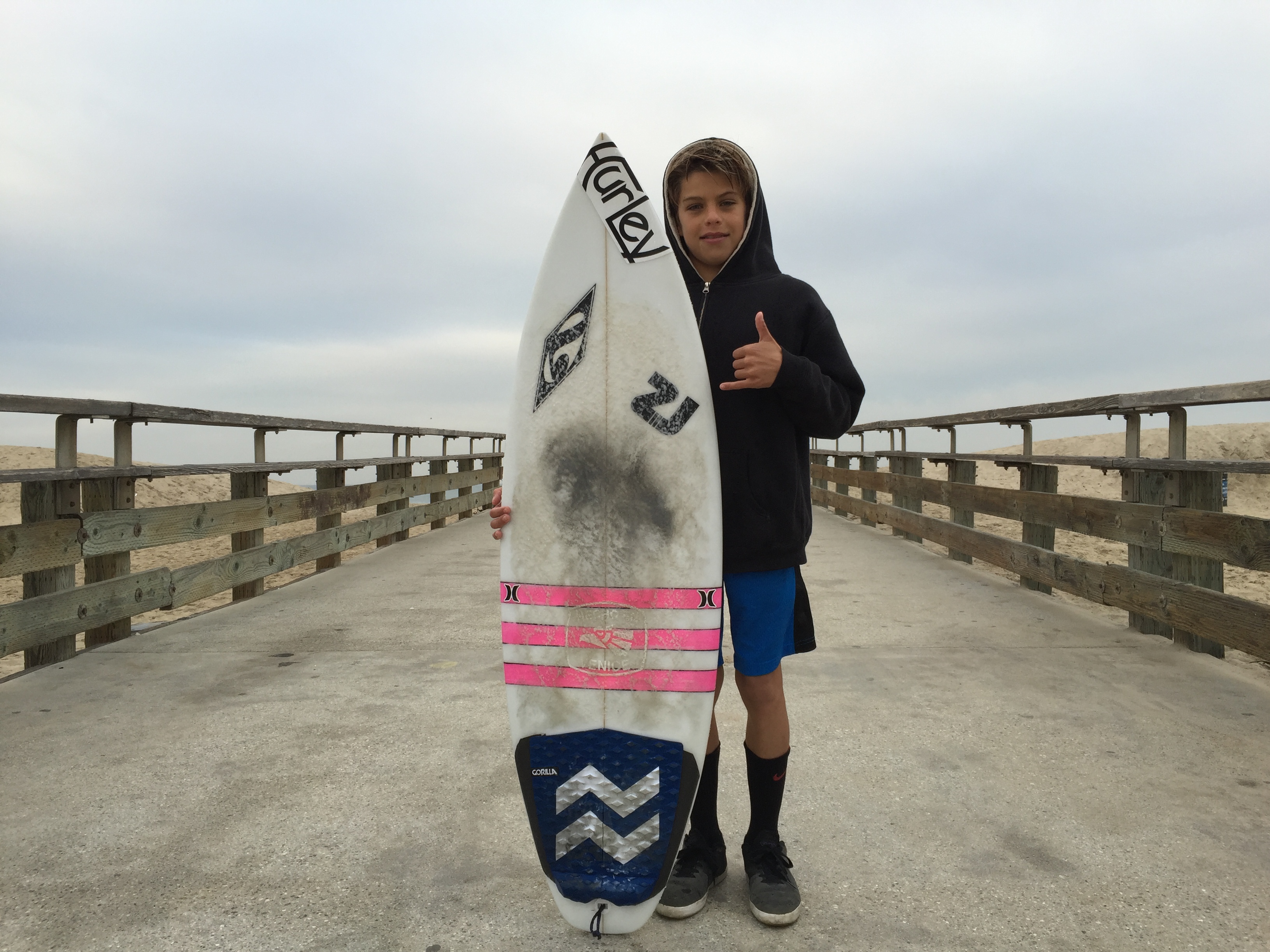 The soft dawn light has Venice Beach glowing gray, the sun has not yet risen, and clouds hang heavy in the sky. It is a dull winter morning after a week of storms but Beck Adler doesn’t need the sun, or even an alarm clock to get him out of bed, not when there is a wave to ride.

Beck is joined most days by his brother West. This morning however West is holed up in bed with strep throat. The boys have been described as being the Yin and Yang of surfing. “He has an old soul,” Beck says of his brother, “he longboards and rides single fins, and shapes his own boards,” whereas Beck on the other hand has his sights set on going pro. He is the third young surfer from the Los Angeles area to be invited to compete on the Surfing America Prime series.

Board tucked under one arm, Beck hurries down to the water’s edge, plunges in, and paddles, slicing through the whitewash as he makes his way out to the break at the Venice Pier.

At just 13 years old he’s almost half the size of most others out catching waves but his form sure catches the eye of most people watching from the Pier. “He’s great, really talented,” says one photographer who snaps away at the young surfer. “My favorite,” says another.

Beck’s father, Gary Adler, stands near local photographer Mike Riggins. Riggins is down at the pier most mornings taking photos of all the surfers.

“The kids love seeing if they’ll make the cover of Mike’s facebook page that day. It’s great for them to get on and take a look at pic- tures of themselves in action. It helps with their form,” says Gary.

With Venice local, 13 year old Noah Hill, winning a national championship last year and becoming a member of the US Surf Team, Gary says that all the Venice kids now push each other very hard to follow in Hill’s footsteps, “things are changing for the better for the kids around here and this young generation is leading that charge.”

It is common knowledge that you need to earn your place if you want to surf the Pier, “I haven’t earned mine yet, I stay kinda to the side,” says Gary, unlike Beck, who has.

Beck has been surfing Venice Beach for the past 11 years, most of his life. He started when he was only 2 years old, “my Dad was pushing me in the waves on a big soft top,” says Beck.

“We started down at the end of Driftwood Avenue, I’d bring the kids down on weekends and would push them into waves and they got better and better and better. When they were about 7 they kept asking me, ‘can we go down to the Pier,’ and I finally said, ‘OK,’ and they worked their way into the lineup and now they just know everybody and it’s really nice,” says Gary.

Gary explains that a beautiful thing has started happening at the Pier, “Beck and the other local groms have been taken under the wing of the older Venice locals who give up their break from 6am to 8am every morning so the kids can get as many waves as possible before school and then they take over the break after that.”

The support the older locals are giving the younger surfers is something that has happened organically, “it’s unsaid, they look out for the kids and want them to get as many reps as possible and get better, but if it’s really good they’ll just go out and take over. Which is great,” says Gary.

While Venice is Beck’s home break on weekends he hits the road to compete and entering competitions not only help him move closer to his goal of going pro but he gets to experience surfing breaks all up and down the coast of Southern California.

Beck bobs in the waters off the Pier watching for a wave, “yeah, there’s some bad waves but there’s always going to be a good one, you just have to find it. You have to wait for the good ones if you want to get the best ride and it pays off when you wait,” he says.

However patience is not something he takes out of the water, “no, I’m not very patient in life. I’m pretty hyper,” and already Beck has sponsors. He is on the amateur Hurley team which means he gets free gear like wetsuits, clothes, and stickers, “they’ve been sending me boxes now 3 every 4 months. That was a great feeling when I got sponsored by Hurley.”

Anderson Surfboards have been shaping custom boards for Beck for the last 3 years and have given him 15 boards all up. ZJ Boarding House is Beck’s surf shop sponsor, and Hecho en Venice is another local sponsor that provides clothing for the young surfer whose aim is to “take it all the way” to the World Surf League.

Former pro surfer and Venice local, Justin Swartz, is Beck’s surf coach. Together they train 3-4 times a month, depending on Beck’s contest schedule. After training they’ll get together at the Adlers’ home to review videos.

Beck says all the travel he gets to do through surfing has shaped his outlook on life,“I get to travel different places in California and the world and I get to see so many different things and lifestyles and it impacts how I live.” He says surfing has inspired him to think more about human’s impact on the environment, “recycling, all that kind of stuff.”

“there’s trash all over the place and it’s sad. There are beach clean ups every now and then but when you see people throwing ciga- rettes into the street… it doesn’t make me feel good.”

From his spot on his board in the water Beck sees the impact a city full of people, who don’t always think before they litter on the streets, has on the environment, “when it rains there’s so much trash in the ocean. So just recycling anything you can, clean up after yourself, and if you see a piece of trash pick it up and throw it away,” he says.

Gary whistles from the Pier, Beck seems to be pretending he can’t hear his Dad as he paddles out to catch a last wave, make that his second last one before he finally rides one all the way in to the shore.

Back in the carpark he pours a cooler full of hot water down the front of his wet suit to warm up while Gary calls Tommy’s on Washington to order a breakfast burrito – although he doesn’t quite order so much as let them know he and Beck are on their way. All part of the morning ritual.

“I’ve surfed my whole life. Probably will keep surfing my whole life,” says Beck who was looking forward to the weekend because it meant he’d be able to surf 3 hours each day instead of only an hour forty five.

“It was obvious from the beginning that he was going to be good.” “I joke that I taught him everything I know “how to stand up” and he took it from there,” says Gary.

Where Beck takes it from here appears to be a clear run.