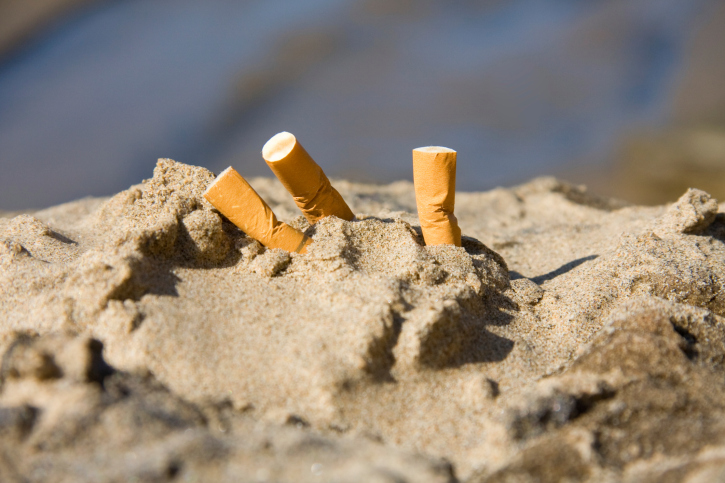 As the President of the Venice Neighborhood Council (VNC) important issues facing Venice come across my desk every day.

Those issues are familiar to most of us, and are issues we face every day. Whether it’s parking, development, homelessness, crime or trash, we all have opinions, and we make them heard.

However, lately a more subtle issue has struck me as equally important. Though it has become common, albeit offensive, it dawned on me that we live in a beautiful seaside community where somehow we have resigned to “accept” people throw their cigarette butts on the sidewalk, in the street or worse. And, in a way, what is even stranger, is that people commonly see this happening, and don’t do anything about it. Perhaps it seems rude, or even dangerous to confront someone on the street. Maybe it’s unsanitary to simply pick it up for them after they are gone. In any event, that butt ends up in the street, and ultimately in the ocean.

In fact, this was the scene of my front yard, sidewalk and street on a Sunday morning after a Saturday night party we hosted. To be sure, none of our guests meant anything by it, and to the person I would characterize everyone as “progressive,” “green,” and generally “considerate.” But, it’s just too easy to be lazy and flick your butts into the street, rather than take 10 seconds to crush it out and throw it in the trash. As I swept my yard and gutters that Sunday morning, I started thinking about what can be done.

To be clear, this column is not about smoking; that’s a different discussion. It’s clear that smoking is legal where it is, and illegal where it’s not. This column is about realizing that almost every one of those butts end up in our ocean. Cigarette butts make marine animals sick and sometimes kill them. I’ve watched my kids dig sand castles, and dig up butts.  I’m sure even younger children will put them in their mouths. I’ve seen butts floating in the water when I surf, and if you really want to see how much of a problem this is, walk the shoreline after a good rain. It’s shocking to see the amount of butts that wash onshore.

Nor does this seem to be a class or a race issue. I’ve seen homeless guys toss their butts, as well as clearly wealthy people tossing them out of expensive cars. It almost seems to be as much of a habit as smoking itself.

So, I’ve decided to start calling people out on their behavior. To be sure, I am as polite as possible, and not looking for a fight. “Excuse me, would you mind picking that up, my kids find them washed up on the beach all the time,” or “Do me a favor, can you stamp that out and throw it in the trash so it doesn’t end up in the ocean.”

As a last resort, I will pick up the butt myself, and throw it away. So far I’ve had nothing but understanding, and almost apologetic responses to my requests. Indeed, I really do think tossing butts is part of the habit of smoking. But, like millions of smokers who have quit, those still smoking can certainly break that part of their habit, when they focus on the harm it causes.

Remember, the bottom line is litter is litter, and cigarette butts are possibly the best example of how destructive littering can be.
Do us all a favor, if you smoke, can your butts.  If you don’t, please take the time to ask a smoker to do so, for all of us.

Mike Newhouse is a 19-year Venice resident, an attorney, and president of the Venice Neighborhood Council (venicenc.org).