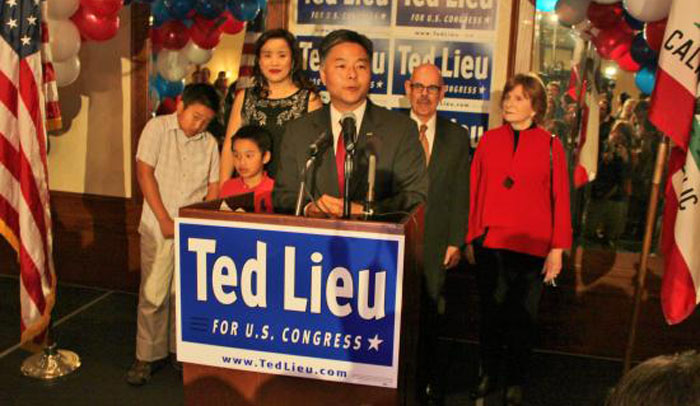 State Senator Ted Lieu, who had established a campaign office in Venice, was humble and gracious at his election night party Tuesday following his defeat of Republican gang prosecutor Elan Carr in the battle to replace retiring Congressman Henry Waxman.

Waxman, who has held the seat since 1975 and endorsed Lieu, received a loud welcome when he and his wife Janet joined Lieu and his family on stage at the Proud Bird restaurant near LAX at about 11 pm Tuesday.

“This is the first time I’ve not been on the ballot since 1968,” Waxman told several hundred of Lieu’s supporters. “To me it’s been a great honor to represent this 33rd Congressional District which includes West L.A. and all the way down into the South Bay to the Palos Verdes Peninsula. I’m leaving my career in Congress and Janet Waxman, my wife, and I are here to pass on the mantle of the job of being a Representative to Ted Lieu.”

Waxman wished Lieu well in the next chapter of his political career.

“While this has been a discouraging night for our Democrats, and a sad time for me because so many of the people that have lost throughout the country were astounding public servants,” Waxman said. “The highlight of this whole evening is to see Ted win.”

Lieu spoke about how remarkable Waxman’s 40-year career in Congress had been.

“He is an amazing legislator who for four decades has passed so many laws that help save lives for millions of Americans from his work on the AIDS Act, to Clean Air amendments, to his fight against tobacco – virtually every aspect of our lives has been touched by Henry Waxman.”

Lieu spoke about his commitment to the voters who elected him.

“As your member of Congress, I’m going to do what I have done in State Legislature, which is work on bipartisan basis with Democrats and Republicans to solve our challenging problems, to grow our economy, to create new jobs, and get California and America to a better place,” Lieu said. “But there’s also going to be areas where there’s not going to be an agreement. And those areas I’m going to fight for you and for our constituents on issues such as climate change, I’m going to fight to make sure we enact strong climate change legislature, as an immigrant myself I’m going to fight for comprehensive immigration reform, and I’m going to work every day to pass a constitutional amendment to overturn Citizens United. And what we’ve seen with that profoundly stupid decision is a flood of money into politics, but there’s only so much that money can do.”

Lieu said if money was the only thing driving politics, he would not have been elected Tuesday.

“I was outspent in the Primary by at least two of my opponents, and in the General Election, we were outspent again because two Super PACs came in and spent over $800,000 attacking us and supporting our opponent, and yet we’re ahead,” he said. “The reason we’re ahead because the Super PACs have something which is just money, but we have our view and that’s why we’re ahead.”

Carr surprised some by finishing atop a crowded field of candidates in the June primary election with 21.5 percent of the vote. But Carr benefited from the splitting of Democratic votes among a list of candidates that included former Los Angeles City Councilwoman and City Controller Wendy Greuel.

Lieu is a graduate of Stanford University and the Georgetown University Law Center. He served in the U.S. Air Force, serving at one point in Guam and helping airlift Kurds out of northern Iraq. He later worked as a clerk at the U.S. 9th Circuit Court of Appeals and practiced civil law. He was elected to the Torrance City Council in 2002, the Assembly in 2005 and, the state Senate in 2011.