From LAist via Businesswire:

Today is International Condom Day! From noon to 2pm today, a 53-foot 18-wheel ‘Condom Nation’ big rig will be in Venice with “condom nation” advocates giving out 2,000 Valentine-themed ‘LOVE’ condoms! 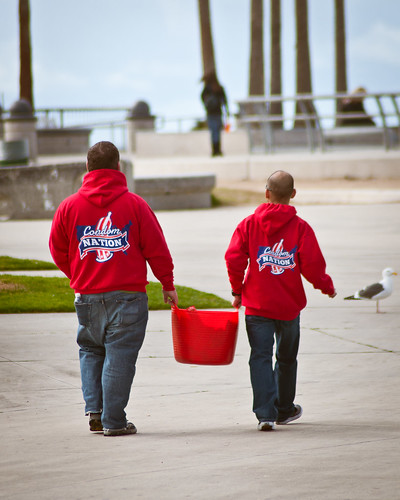 From the AIDS Healthcare Foundation:

From the famed Boardwalk in Venice Beach, California and as part of its worldwide observation of International Condom Day—an informal holiday observed on February 13th in conjunction with Valentine’s Day—AIDS Healthcare Foundation (AHF) will launch its ‘Condom-Nation’ tour—a groundbreaking 20-state, six-month nationwide tour of AHF’s specially-designed 53-foot long, 18 wheel ‘Condom Nation’ big rig truck which will stop in select cities, towns and states along the way to hand out millions of free condoms and safer sex information in conjunction with local partners offering free HIV testing at many of the tour stops. 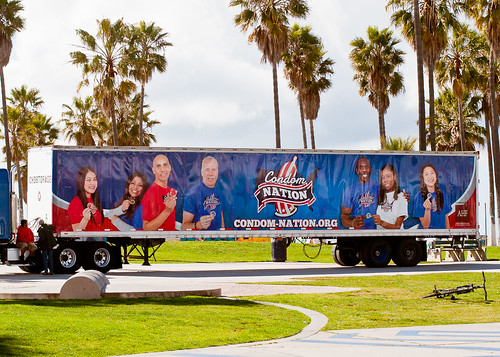 The first stop for AHF’s ‘Condom Nation’ tour will be Oakland, CA for a condom distribution and HIV testing event on February 17th; the big rig and a similarly wrapped smaller ‘Condom Nation’ sprinter van expect to conclude the U.S. tour in late July in Washington, DC, just before the opening of the XIX International AIDS Conference in that city.

“Condom Nation is a serious, yet somewhat whimsical and creative effort by AIDS Healthcare Foundation to help promote increased condom use and to help make condoms more accessible and affordable,” said Michael Weinstein, President of AIDS Healthcare Foundation. “Condoms are an essential part of preventing HIV and STDs. Not only are they extremely effective at preventing transmission, they are cheaper and easier to use than many other prevention tools. Our hope is that Condom Nation raises awareness and sparks conversations along the way—both on the coasts and in the heartland—about the importance condoms and the crucial role they play in disease prevention and safer sex.”

Currently, there are approximately 48,000 new HIV infections and 19 million new STD infections every year in the United States.

Unfortunately, few people have reliable and affordable access to condoms. Recent studies show that when condoms are available and reasonably priced or at no cost, more people use them as a protective measure against STDs and unwanted pregnancies. In addition, the average wholesale price to make one condom is approximately $.04 leaving $.96 for profit. This is still too expensive for many people.

“In order to better protect the public health, we need universal access to condoms and they need to be available at an extremely low cost,” said James Vellequette, Associate Director for AHF’s ‘Condom Nation.’ “This tour is national call to action to achieve these goals.”

According to a December 2011 HIV/AIDS Policy Fact Sheet produced by the Kaiser Family Foundation, the CDC reports that there are approximately 1.1 million people currently living with HIV/AIDS in the United States; an estimated 20% of these individuals do not even know they are infected.

To learn more about Condom Nation and find resources to help your community, please visit www.condom-nation.org