ZJ Boarding House will screen the surf movie ‘Morning of the Earth’ on Friday, September 30th starting at 7pm (bands start at 6) in support of Boarding For Breast Cancer. The screening will take place on the lawn of the California Heritage Museum at 2610 Main Street in Santa Monica. 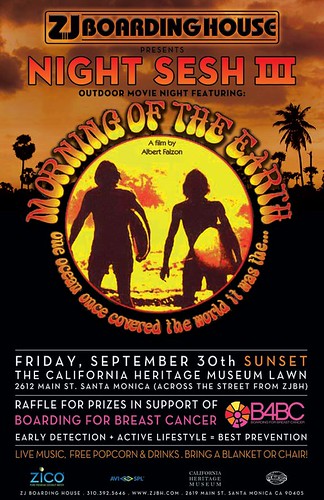 It’s time again to shake the sand out of that blanket or oil up the joints on that rusty beach chair and head over to the lawn for another amazing surf movie from the early 70s. This time its Albert Falzon’s ‘Morning of the Earth’ a “really beautiful, positive film about the world” (in Falzon’s own words) that is universally regarded as perhaps  the greatest surf film of all time.

Featuring stunning surfing sequences from Bali, Angourie, Kirra, Oahu, Maui  and elsewhere (yeah we love footage from Bali and Hawaii, it never gets old). The film focuses on the daily life  of surfers and their harmony with nature that is so expressed in their surfing. Nat Young feeds the animals on  his farm before heading over to Crescent Head for some waves; David Treloar shows us his old weatherboard  house and then hits the surf at Angourie; Chris Brock’s epic tree house and then more epicness at Broken Head. This and more!
We will be raffling off some ZJ prizes in support of Boarding For Breast Cancer. They are a wonderful nonprofit that uses actions sports as a platform to raise awareness of prevention and early detection of breast cancer. We are also taking part in their annual ‘skate the coast’ event happening at the end of October where fundraisers are invited to skate from the Santa Monica Pier all the way to the Redondo Beach Pier.   Live music, free popcorn and drinks!