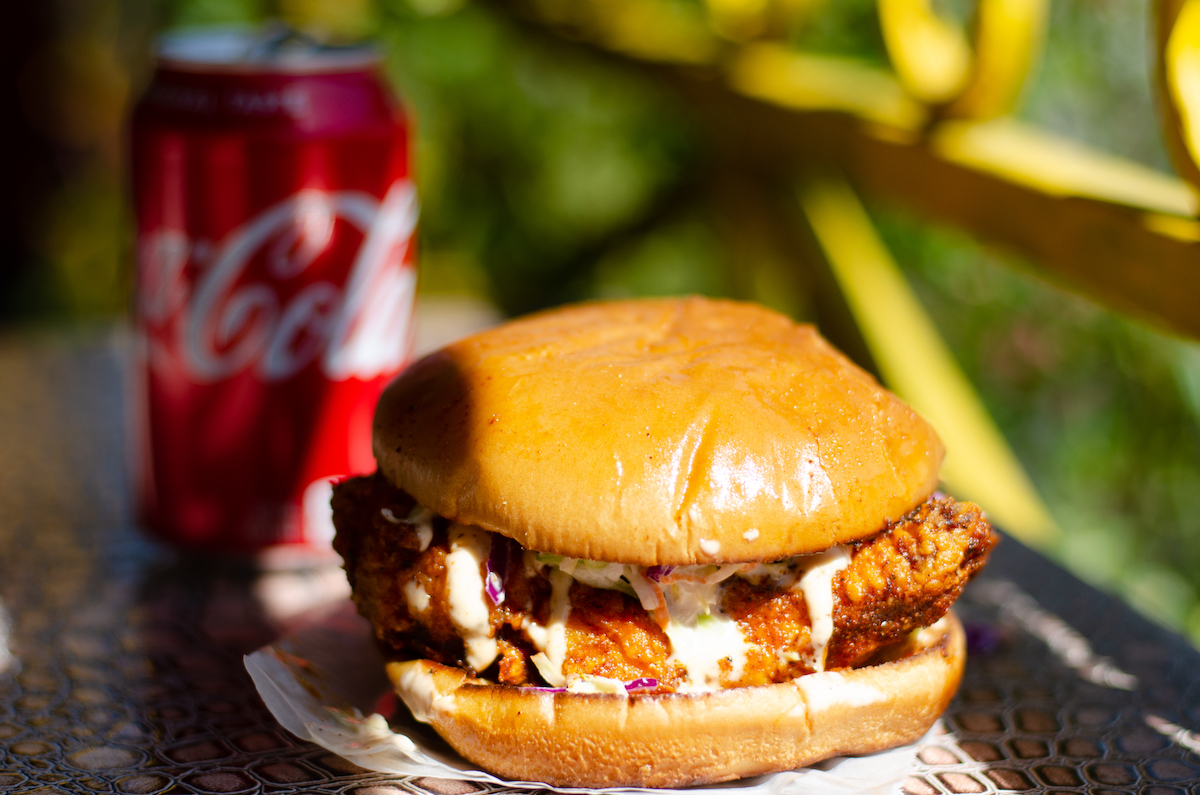 The Nash Sandwich from Al’s Hot Chicken in Culver City

Is the best fried chicken sandwich in the world here on the Westside? While there is no concrete answer to this question, Al’s Hot Chicken, Nashville Style in Culver City makes a strong case.

Located at 10821 Venice Boulevard, Al’s Hot Chicken* does one thing and only: Nashville-style fried chicken. Plus a handful of sides– fries, mac and cheese, fried pickles, coleslaw, collard greens–banana pudding and waffles.

For lunch I got The Nash Sandwich seasoned “hot” aka “burning spicy”, according to the menu. Instead of fries, I opted for a healthier option: mac and cheese. Along with a Coke, the grand total came out to $11, a bargain and a half for the Westside.

I hardly had time to enjoy Al’s shaded patio before my order was ready and off the bat I knew this sandwich was going to be special. While judging a book by its cover is a risky endeavor, judging this sandwich by its appearance was warranted, as upon biting in I became aware I was eating a piece of culinary perfection.

“Juicy, spicy, crispy yet not overly greasy or burning,” read my notes on the meal. Juicy because this is a hearty sandwich, made with a thick breast cooked to perfection. Spicy because it’s a hot chicken sandwich, but at the “hot” heat level it’s not overwhelming, yet still packs a punch. Crispy because the breast was deep fried in a vat of oil but done in a way will not leave you feeling like a greasy sponge. Add a secret sauce and a bit of coleslaw for texture, all in a perfectly constructed sandwich, and the final result is one of the top-10 things I have ever eaten. The mac and cheese, which was great as well, was just icing on the cake.

On the drive home I was thinking about the meal and could not come up with one complaint. And after digesting, I was already craving Al’s Hot Chicken again, texting friends to set up a return trip. While I still have yet to return (it’s been over a week), I can say with confidence that this is the best fried chicken sandwich I have ever had.

Earlier this year, when reviewing the The OMG sandwich from Heroic Italian in Santa Monica, I wrote “When gauging a restaurant’s rating, I like to tend to reserve ratings of 8 and above for places that I would take a friend from out of town to. The Godmother from Bay Cities, which I would give at least a 9/10 to, is an item I make nearly every person visiting LA eat.” The Nash Sandwich is on par with the Godmother. Not only will I be taking every visitor there, but I would take a Micheline guide food critic with confidence.

*Al’s also has a location in Sherman Oaks.