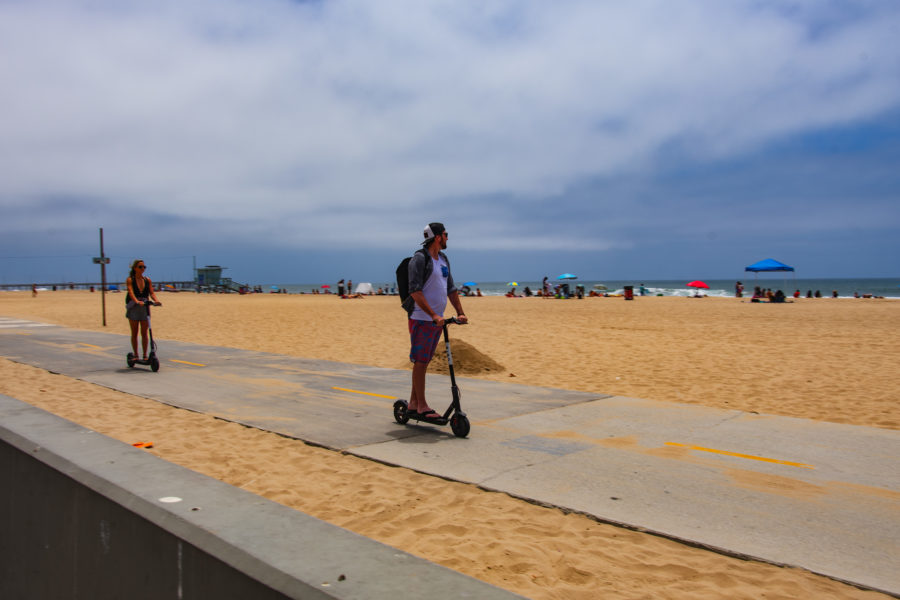 UCLA study shows the dangers of e-scooters on the Westside.

A new UCLA study sheds light on the severity and frequency of e-scooters accidents, particularly for riders involved in crashes on the Westside.

“During the summer, we saw about 2-3 injuries a day and even more on the weekends,” said Dr. Wally Ghurabi, medical director of the Nethercutt Emergency Center at UCLA Medical Center, Santa Monica. “The injury numbers have grown in direct proportion to the number of e-scooters in the city, so we don’t think this problem will go away anytime soon.”

Researchers at the University of California Los Angeles (UCLA) have found that people involved in e-scooter accidents are often injured seriously enough — from fractures, dislocated joints and head trauma — to require treatment in emergency rooms.

The researchers examined data from 249 people who were treated at the emergency departments of UCLA Medical Center, Santa Monica, and Ronald Reagan UCLA Medical Center between Sept. 1, 2017, and Aug. 31, 2018. The study found that about one-third of them arrived by ambulance, an indication of the severity of their injuries.

“The biggest take-away here is that you need to be aware of the risks and follow the law, especially when it comes to wearing a helmet. Fifteen miles an hour is fast. If you hit the brakes too hard, you can fly over the handlebars in an instant. We’ve seen teeth knocked out, jaws broken in several places, noses crushed and head injuries including skull fractures.    The most common injuries are wrist, ankle, collarbone and shoulder fractures, but we’ve even seen a young woman wearing flip-flops who needed to have part of her foot amputated after she ran her e-scooter into a car,”  Dr. Ghurabi said.

The Westside is the epicenter and birthplace of the e-scooter movement,  but the devices are now available in more than 60 cities nationwide and about a half dozen locations outside of the U.S. The global proliferation of e-scooters was one of the reasons the researches carry out this study.

“There are thousands of riders now using these scooters, so it’s more important than ever to understand their impact on public health,” said Dr. Tarak Trivedi, the study’s lead author, an emergency physician and scholar in the National Clinician Scholars Program at the David Geffen School of Medicine at UCLA.

The research, published Jan. 25, is the first published study on injuries caused by e-scooters. It finds that the most common form of injury among scooter riders were falls (80 percent), collisions with objects (11 percent), or being struck by a moving vehicle such as a car, bicycle or another scooter (9 percent).

Only four percent of injured riders were wearing a helmet the study also notes. The researchers also observed e-scooter riders at various Los Angeles intersections for a total of seven hours in September 2018. About 94 percent of the 193 people they saw riding scooters were not wearing helmets.

About 92 percent (228) of the injured people were riders, and 8 percent (21) were non-riders, including pedestrians who were struck by scooter riders or who stumbled over a discarded scooter.

“Pedestrians can trip over scooters lying unused on the sidewalk, and can be hit or tripped by someone riding by them.  With so many older people in Santa Monica, it’s something we should all be very concerned about,” Dr. Ghurabi said.

Yo! Venice reached out to Bird and Lime asking for a comment regarding the study’s findings.

Bird’s Paul Steely White, Director of Safety Policy and Advocacy, offered a response to the research.

“We applaud those who thoughtfully and productively look into all aspects of the rise and impact of shared e-scooters as an environmentally-friendly mode of transportation,” Steely White said.

Steely White went on to say that Bird took issue with the fact that researchers did not work with the company when compiling the study, which he called “limited” and misleading.

“While the report importantly highlights the parity in safety between bicycles and e-scooters, it fails to take into account the sheer number of e-scooter trips taken—the number of injuries reported would amount to a fraction of one percent of the total number of e-scooter rides,” Steely White said. “Moreover, the report fails to put e-scooter injuries into context as they relate to the high number and severity of injuries and deaths caused by motorcycles and automobiles.”

Lime responded in an email saying “At Lime, the safety of our riders and the community is our number one priority. That’s why every day we’re innovating on technology, infrastructure and education to set the standard for micromobility safety. Lime has recently led several safety initiatives.”

These safety initiatives include the launch of the Lime Gen 3 scooter with enhanced safety features, 250,000 free helmets distributed and $1 million in liability insurance with each ride.