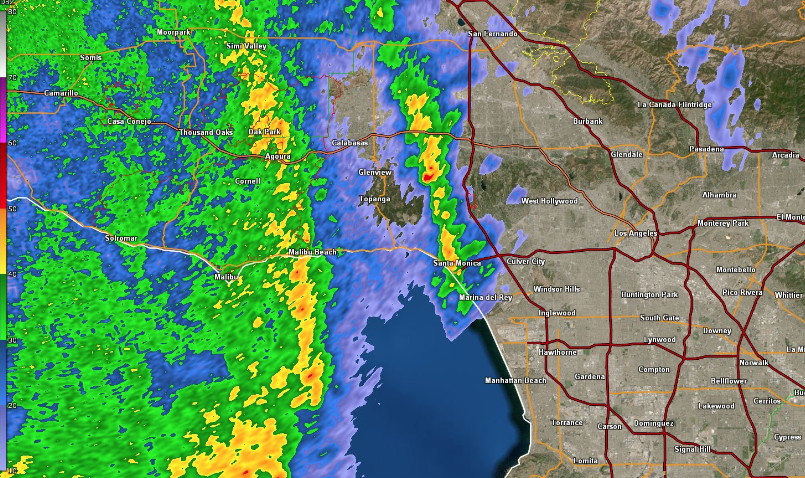 As the first in a series of heavy storms move into the Los Angeles area, the City of Santa Monica has ordered all beaches to be evacuated due to lightning and L.A. County Lifeguards are urging beachgoers to seek shelter off the beach.

“Please evacuate all ocean and beach/sand areas. If on the beach or on the Santa Monica Pier, seek shelter indoors until the storm has ended,” wrote the City of Santa Monica in a tweet.

According to the National Weather Service (NWS) lightning is expected to last through the afternoon.

This current storm, which is expected to drop no more than an inch of rain, will be followed by a more significant storm that will move in Friday night. This second storm will bring 1-3 inches of rain and gusty southeast winds blowing 40-60 mph. On Sunday through Monday night, periods of showers are expected as the snow level will drop below 5,000 feet, according to the NWS.

Areas in Los Angeles and Ventura counties impacted by the Woolsey Fire are seeing mudslides due to the storm. Caltrans crews will be on duty 24/7 on Pacific Coast Highway (PCH) and other areas within the burn zone to monitor for debris and mudflow.

According to Caltrans, Mud is currently blocking all lanes of PCH at Deer Creek Road just north of L.A. County. All lanes of PCH are closed between Los Posas Road and Broad Beach Road due to mudflow. Caltrans is urging the public to avoid the area and use alternate routes. Duration of the closure is unknown.