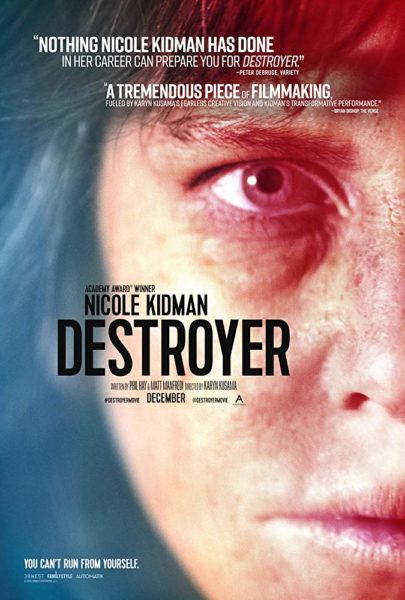 Get ready…”Destroyer” is like the lump of coal that Santa delivered if you were really, REALLY bad – or the what your worst enemy might put in a pretty box and leave on your doorstep. This movie is about vengeance, and vengeance as only a wronged woman can dispense it. Nicole Kidman transforms herself into Erin Bell, a disgraced FBI agent with a drinking problem and extreme anger issues – a character so broken, angry and focused on revenge that she doesn’t really need to put into words the fact that she’s dangerous because she doesn’t “care what happens.” Liam Neeson could take lessons from Kidman for his next vigilante role.

This is a relentlessly painful portrayal of a woman who has endured unspeakable pain in her life. Kidman has created this character from the depth of her soul and has channeled animal instincts to present her physicality. Director Karyn Kusama says that she sent Kidman a clip of a group of trapped coyotes to emulate to get to the heart of her character. The rest of the cast are excellent foils to Kidman’s relentless commitment to retribution. Toby Kebbell is perfectly understated as evil incarnate, Tatiana Maslany as the gang moll, Sebastian Stan as fellow FBI agent/lover and Bradley Whitford as a deliciously sleazy businessman.

Director Kusama followed the script explicitly, which in the end hurt the flow of the descent into the character’s agony. Flashbacks are perhaps a bit overused and the jumps between past and present interrupt the flow. However the story still moves with a forceful rhythm, and the acting and camera work draws you into the mind of the protagonist. Makeup artist Bob Corso should get an Oscar nom for his work here. Many of the characters undergo complete physical transformations which he makes seem real.

The story is a mixture of Greek and Shakespearean tragedy set in modern day Los Angeles. The budget was low for this kind of film and the shoot schedule was tight. However in this case the budget constraints may have added to the realism and to the actors’ gritty performances. Watch carefully for clues about each character, as all is not laid out to be obvious. The end is a dramatic cathartic twist.

By Yo Venice Staff January 2, 2019
in Westside Wellness
Related Posts