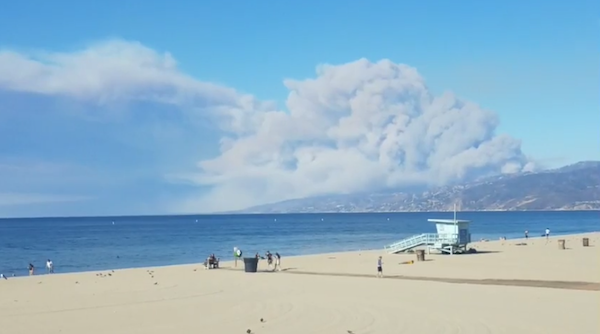 As the Woolsey Fire burns through 10,000 acres of Ventura and Los Angeles counties, forcing evacuations in around 75,000 homes in Malibu, Calabasas and Thousand Oaks, Venice residents are being warned to be prepared.

Captain Clark of Los Angels Fire Department 63 (LAFD) in Venice told Yo! Venice that while there has been no uptick in fire activity in the area, due to the dry and hot Santa Ana conditions, small fires have the potential to spread rapidly.

“Maintaining access through your community is imperative right now,” Captin Clark said. “This means keeping fire hydrant access clear, everybody should have a more heightened sense of awareness, staying vigilant, keeping an eye out for the potential for small fires that could end up having a rapid spread of growth and maintain your situational awareness with the media and staying up to date with any evacuations taking place.”

According to Captain Clark, while Bell Canyon and Malibu are the two closest areas to Venice currently under education, the Pacific Palisades may be forced to evacuate at some point in the future. Clark said while urban areas in Venice are not particularly at risk, the LAFD is “concerned about the wash area around Ballona Creek.”

The National Weather Service has issued a red-flag fire warning that will remain in effect through Friday night. Follow the LAFD on Twitter @LAFD for the most up to date information.