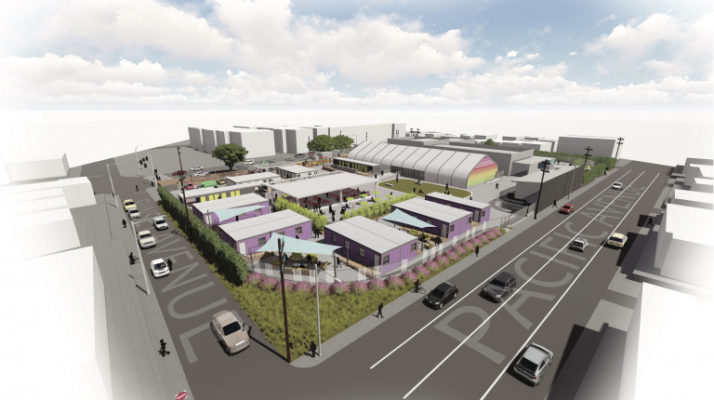 Councilmember Mike Bonin has released design sketches of what the proposed bridge housing facility at the old MTA lot on Main Street would look like.

The facility, which would be part of Los Angeles Mayor Eric Garcetti’s Bridge Home initiative, would serve homeless individuals in Venice, which has the highest concentration of homelessness on the Westside.

“The proposed site in Venice is the former Metro bus yard on Main Street. It’s vacant, available for limited short-term use and right near the largest concentrations of homelessness in Venice,” Bonin said in a Facebook video. “Mayor Garcetti and I believe that the status quo is unacceptable, and we are determined to act to change it.”

Residents and staff would enter the facility from Main Street, through a garden area, past the offices of social service agencies. Inside, the facility will provide up to 154 beds – 100 beds for adults and 54 beds for youth. Youth and adults would have separate restrooms, showers and laundry facilities.

Under the proposal, there would be storage for residents’ belongings, plus an area for pets. Meals would be served on-site in a central dining area. In addition, the proposal would include features intended to aid residents to get back into the workforce.

In his video statement, Bonin emphasized that the facility would include features and be designed in a way to keep the character of the neighborhood intact.

“There would be a community garden, and a place for public art projects, getting residents to work together and build community. From the outside, neighbors would see decorative, artistic fencing and landscaping,” Bonin said.

The plans released by Bonin are not final and are subject to change. On Wednesday, October 17, Bonin and Mayor Garcetti will hold a moderated town hall at Westminster Elementary School for the public to weigh in on the project.

Like the project itself, this town hall has generated some controversy within the Venice community. The Venice Stakeholders Association (VSA ) is accusing Bonin’s office of attempting to exclude some Venice residents from participating in the town hall. Mark Ryavec, President of the VSA, argues that the location of the town hall is not big enough to hold Venice residents. In addition, Ryavec takes issue with the fact that Bonin’s office has invited constituents from outside Venice.

“Even though there is not enough room for Venice residents at the [Westmineter] Elementary School auditorium, the invitation for the event was sent to all of Council District 11, from Pacific Palisades to Westchester,” Ryavec said “We also have been informed that Councilman Bonin has recruited homeless advocates and social service employees from throughout the city to attend and urged them to sign up early, displacing Venice residents.”

When asked about these accusations, Bonin told Yo! Venice that the claims of the VSA were “absolutely not true” and that the invite was sent only to the Venice email list

“Serious people have legitimate questions and concerns about the proposed bridge housing, and I hope Mayor Garcetti and I answer all of them. It’s unfortunate some of the opponents are clouding an important and complex issue with all-too-familiar tactics: lying, attacking journalists, implicating supporters in complex conspiracies, and waging a campaign to vilify an entire class of people as dangerous criminals,” Bonin said. “The solution to encampments in our neighborhoods is housing. Constantly opposing solutions only makes the problem worse — and that is an injustice to everyone in Venice.”

The Town Hall on the 17th is expected to draw a large crowd. To RSVP and secure a seat, click HERE.