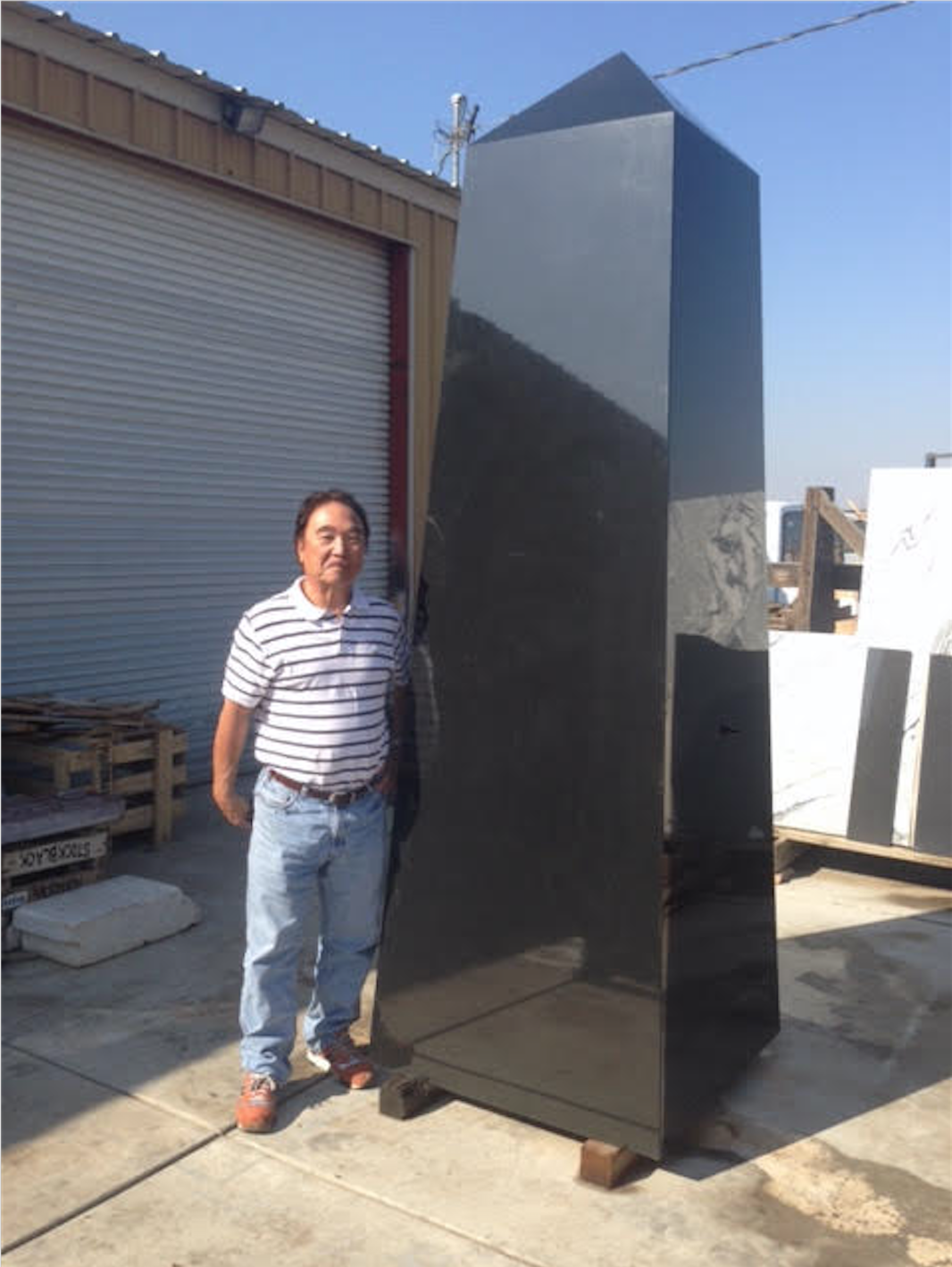 Pictured: Brian Maeda. His older brother, Arnold, will have the story of his experience at Manzanar engraved on the obelisk.

The Venice Japanese American Memorial Monument (VJAAM) is ready to be engraved. Forever marking in stone the stories of Japanese Americans, living in the United States, forced into internment camps during World War II.

The VJAMM Committee has been working for six years, collecting letters of support, raising funds, chasing reports, and securing approvals. In August this year, the 9-foot-6-inch tall, solid granite obelisk was loaded up and shipped out of India. Destination? Arvin, California.

David Williams, Certified Memorialist, and owner of Williams Monument Company will engrave all four sides of the 14,000-pound VJAMM. The history of Japanese American internment, quotes from former Manzanar internees, acknowledgment of major donors, and a map from Venice to Manzanar will grace the monument.

Arnold Maeda’s experience will be one of the stories engraved on the obelisk.

Just 15-years-old Maeda, along with his parents, was asked to report to a meeting place in Venice Beach. The family lived in Santa Monica and had been told only to bring what they could carry. Bags and suitcases packed, the family joined 1000 other Japanese Americans who all lined up along the north side of Venice Boulevard. Right by the spot that is now Beach Cities Car Wash, just west of Lincoln. At the time no one knew what would happen next.

Sent to the Manzanar Relocation Center internment camp, Maeda would be 19 before he and his family would be free again, “I spent 40 months behind barbed wires,” he explained.

The Maeda’s lost everything they had worked for, their home, their gardening business, and their liberty. Their youngest son Brian (pictured above) was born in the camp.

“The VJAMM will commemorate this history and remind us to be vigilant about our Constitutional rights, so such a forced removal and incarceration solely on the basis of ethnicity, gender, sexual orientation, race, or religion, will never happen to any group again,” says Phyllis Hayashibara of the VJAMM Committee.

A dedication ceremony for the monument will take place April 2017, coinciding with the 75th anniversary of  The internment of Japanese Americans in the United States during World War II.

“The VJAMM Committee has worked so hard to make the monument a reality,” said Hayashibara. Now, they are on the home stretch.