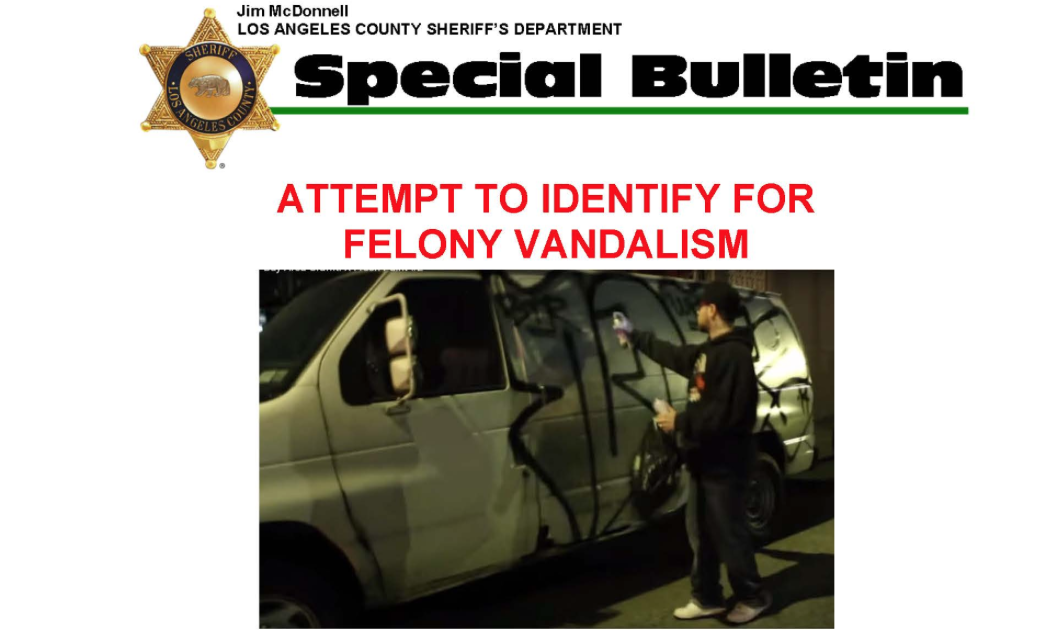 The Transit Policing Division of the Los Angeles County Sheriff’s Department have released a picture of a man they believe may be the tagger who vandalized the Vietnam Veteran’s Memorial in Venice.

Here is their media release…

LASD Transit detectives believe that they have identified four of the monikers used by the taggers believed to be responsible for the bulk of the damage done to a Vietnam Veterans Memorial Wall in Venice, California. The wall is located at the rear of what used to be the Metropolitan Transportation Authority Division 6 on Pacific Av., in Venice.

Just before Memorial Day of this year citizens in the area noticed additional graffiti done to the wall.  Sheriff’s Transit Policing deputies were called to begin the investigation into the defacement.

Lead detective on the case, Detective Michael Thibodeaux, is a graffiti and tagging crime expert.  Using several investigative techniques he’s been able to identify the main monikers on the wall that honors service personnel killed in the line of duty during the Vietnam War.  “NONER”, “PHEB”, “SNAKE’, and “LITER”, appear to be the names that created the most damage to the wall.

Detective Thibodeaux discovered that the “NONER” moniker was linked to a tagging group based in the bay area.  In the attached flyer is a photograph of the person believed to be NONER.  The person in the photo appears to be a male, White, or Hispanic.  As you can see in the flyer, the moniker that the person is painting appears to match one from the memorial wall. (see attached photo)  NONER may travel between the Los Angeles area and bay area regularly.

If you have information regarding the identity of NONER or any of the other monikers believed to be connected to this crime please call the LASD Transit Policing Division detectives at (888) 950-SAFE(7233), or if you wish to remain anonymous, you can call “LA Crime Stoppers” by dialing 800-222-TIPS (8477). You also can text the letters “TIPLA” plus your tip to CRIMES (274637), or use the website http://lacrimestoppers.org