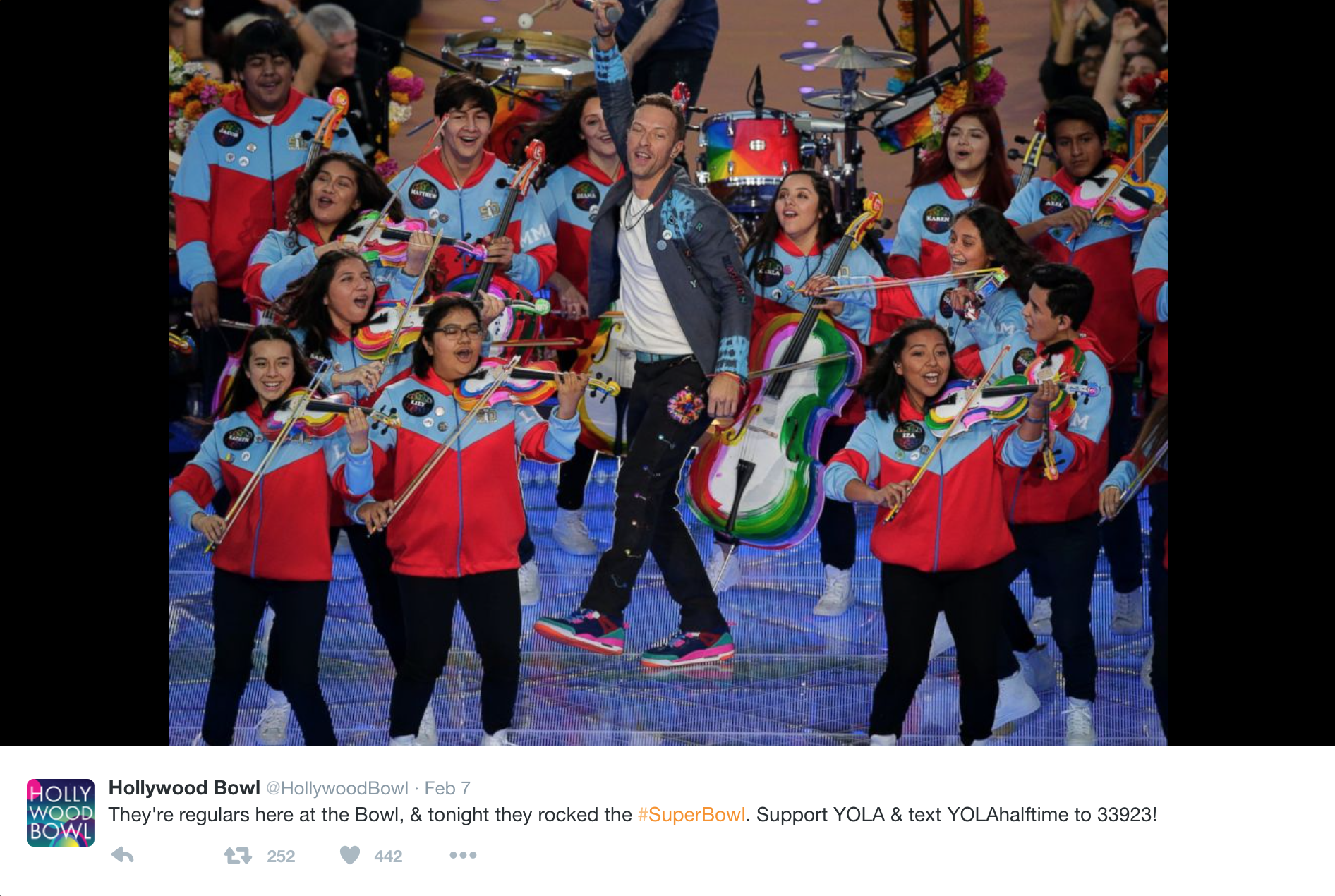 Venice High School has its own Super Bowl superstar. 14-year old Axel, is part of Gustavo Dudamel’s Youth Orchestra LA (YOLA), on Super Bowl Sunday he was kicking it onstage with Coldplay, rocking out on his viola.

“It was unbelievable. When I was up there it didn’t even feel like I was playing in front of millions of people. It just felt like I was in my own little world. My brain kind of filtered out all the people in the background and it was like I was playing by myself. It was a really nice experience,” Axel said.

The road to the Super Bowl for Axel, began with an NDA. “One day I came into practice and the administrator pulled me aside and asked me to sign a non-disclosure form. Once I was done with that she told me I was going to be playing with Coldplay at the Super Bowl,” he explained.

Rehearsals began in December and continued right up until two days before the game. While Coldplay was the overall favorite for Axel, he says the dance off between Bruno Mars and Beyonce was a definite highlight, as was the police escort to the stadium, “they were stopping any traffic that came too close to our bus,” Axel said of his rockstar experience.

Axel has been playing in YOLA for six years after his parents enrolled him in the program, “one day they just brought me to the program and were like, ‘OK, have fun.’” Axel says he was confused at first and nervous, as he had no idea what the program was.

The YOLA program is made possible by the LA Philharmonic and its community partners, who provide free instruments, intensive music training, and academic support to students from underserved neighborhoods, empowering them to become vital citizens, leaders, and agents of change.

Before YOLA, Axel had never picked up an instrument or even showed any particular talent with music. Even now he says he has to work hard to play well, “it sometimes comes easily but most of the time I need to work really hard to figure things out.”

For Axel life after the Super Bowl will continue to include YOLA, as well as seeing him focus on achieving his goal of becoming an engineer. “I’ve always loved music, not just orchestra but rock music as well, but I’ve never thought of making a career out of it. I’ve always thought of following a career in engineering,” he said. Adding that he will always have music in his life, “I have one private teacher, Richard Elegino, he plays for the LA Phil and his friend is a doctor and he plays the Viola.”

YOLA has challenged Axel in ways he never imagined, “I’ve performed many times in the Walt Disney Concert Hall and I really love performing there. I love the musical experience. Not many peo- ple know what it’s like getting prepared for a concert. The time and preparation, and being on stage, even though I’m scared to be onstage. Many times I’ve performed alone on stage and it’s nerve-wracking but being able to communicate to people while not talking is one of my strong points.”

Axel’s YOLA commitment is eight hours a week of after school practice, however this jumps to 18 hours a week over the summer, “I’ve learned how to manage things out of school but to still have a balance of the two,” he said.

The challenge of overcoming stage fright and putting in the hard work to learn difficult musical pieces has taught Axel the importance of always giving things a go, “give it a try, it never hurts to try. I feel like a lot of times when I fail, I earn experience from it and it helps me in the future to know what my mistake was and how I can get better,” he said.

The main thing Axel has learnt from music, and he says it is something he will take into his engineering career, is “you do have to work really hard to get to the final product.”