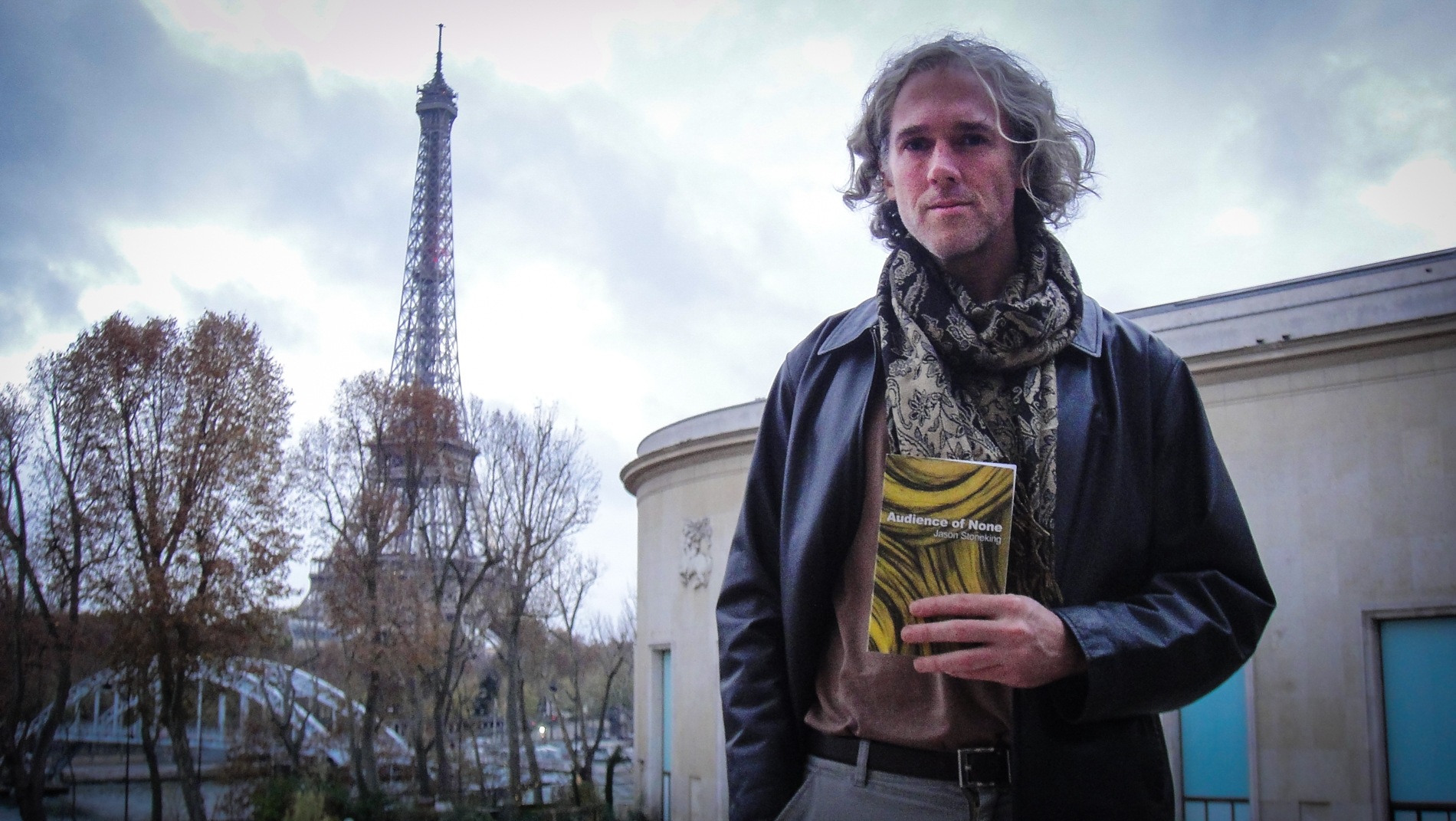 Above: Jason Stoneking will travel from his home in Paris to host a reading at Small World Books in Venice on Monday, Dec. 7.

As a teenager Jason Stoneking lived homeless in Venice. At the time he was an aspiring author, sleeping on the beach, and dreaming of one day being published and having his work sold in Small World Books. Having moved away to live in Paris, it has been more than 20 years since Stoneking’s days as a Venice Beach local. On Dec. 7, he will return to his old stomping ground to read from his book of essays. Speaking to Yo! Venice the author discusses the lead up to the reading, an event he says is a very “sentimental thing…”

What drew you to Venice Beach all those years ago?

Venice is the first place I went when I quit school and left home just before I turned 15. I had just read “On the Road,” and had decided that a pilgrimage to the west coast was the only course of action. I had a brother there that I thought I could stay with, but that didn’t really work out. So I fell in with some hippies on the beach, doing hair wraps, busking, panhandling, selling weed, getting by however I could. I had a gig for a little while cleaning the floors at night in a coffee shop called Van Gogh’s Ear that used to be on Westminster, and sometimes I would crash in there for a couple of hours after I was done cleaning. I was there for large chunks of 89 and 90, when I was 15 and 16, then I was traveling for a while, but I was back in Venice again in 92/93, living on top of the Morrison building for a few months.

How much has Venice inspired your work?

Venice has certainly affected my writing on the whole. Van Gogh’s Ear was the first place I ever read a poem of mine in public. And Small World is where I got my first taste of some of my literary heroes. Venice Beach is also where I met Melanie, my first serious long-term girlfriend, and that’s a story that will definitely be finding its way into my pages soon. Not to mention some of the misadventures I got into there with the cops as a street kid. I have many tales from that time that I have written about in my journals, or that I know I’ll be writing about at some point. It all comes out eventually. I saw a shooting there one time, and had a gun pulled on me as well. And then there was that time that a friend and I got robbed in the public restroom on the beach. All those experiences have definitely played into my writing, even if they don’t appear explicitly in this book. But come to think of it, maybe I should do a whole collection of just my Venice memories next? It wouldn’t be hard to fill!

You say it was always a dream to have a book for sale at Small World Books. How does it feel to know you are days away from holding your own reading at the bookstore?

It’s such a thrill! And it’s also a bit surreal. It’s hard to believe how much time has passed. But I remember, decades ago, sitting on the boardwalk, next to the guy who used to build the giant sand sculptures, spare-changing for a cup of coffee at the Sidewalk Cafe, then going through Small World, running my fingers along the spines of the books, wishing I was Kerouac, wishing I was Ginsberg, wishing I was Jim Morrison, then going back to the beach and writing poems all day, trying to unlock the secret to getting onto those shelves. Later on I wound up living in the same building as Morrison, and after that, I got to read with Ginsberg when I was living in Boulder, and eventually I wound up writing books in Paris (which is something all those guys had done as well). But after all these years, to go back to where I was at the very beginning of that dream is a really magical feeling. I’m so happy to know that Small World is still there!

What can people expect from your reading at Small World Books?

My pieces are usually about tearing down assumptions and opening up new questions. I got into the essay format because at its root, coined by Montaigne as the Middle-French essais or “trials,” it was conceived as a trial ground for ideas, a public forum in which to hash through the author’s feelings and hopefully stumble onto a surprise realization, or even just to illuminate and interrogate the thought process. So my essays aim for that, to dig up unexamined preconceptions and hopefully set myself (and others) off on unexpected trains of thought. That, and I also use them to purge the weight of formative experiences that I might not fully understand, and ask myself questions about how I arrived at my own values. Each one is an investigation. My hope, when I read my work in public, is to make an intimate connection with the people there and pose new questions, open new spaces of conversation that we can occupy together. And hopefully, we’ll all have a nice time together.

How did you end up in Paris?

I took off for Paris at 22, for all the oldest cliché reasons. It was where all my heroes had eventually gone to hone their craft. It seemed to be the destination of choice for poets, artists, romantics, misfits. It was where Rimbaud’s career had started, and where Morrison’s had ended. I knew I had to get there eventually. Plus, I had broken up with a girl and I’m pretty sure there were some police who wanted to know where I was at the time, so it wasn’t so bad to have a far-off place to which I could exile myself.

How long have you been in Paris?

It’s been off-and-on for many years. I first came in 1996. And since then it has felt like home to me, even though I often leave for a few months at a time. I’ll always be a traveler, but Paris very quickly became the place I always come home to.

What is the feeling like in Paris right now in the wake of the terrorist attacks?

It’s a strange and difficult time here right now. People are sad, and scared, and fragile. On edge. But there is also so much love and sincerity that isn’t usually on the surface in the Parisian social style. People are feeling raw. And it’s uncomfortable, but it has also been an opportunity for people to publicly share their deepest most vulnerable feelings. And I think that will ultimately be good for the city and for the strength of the community relationships here. I believe in Paris. And I think we’re going to be ok. Right now we’re all walking around with tears in our eyes and bowling balls in our stomachs, but we’re helping each other work through it.

The reading will be held at Small World Books 1407 Ocean Front Walk, Venice on Monday, Dec. 7, at 6 pm. The bookstore has parking on Speedway.