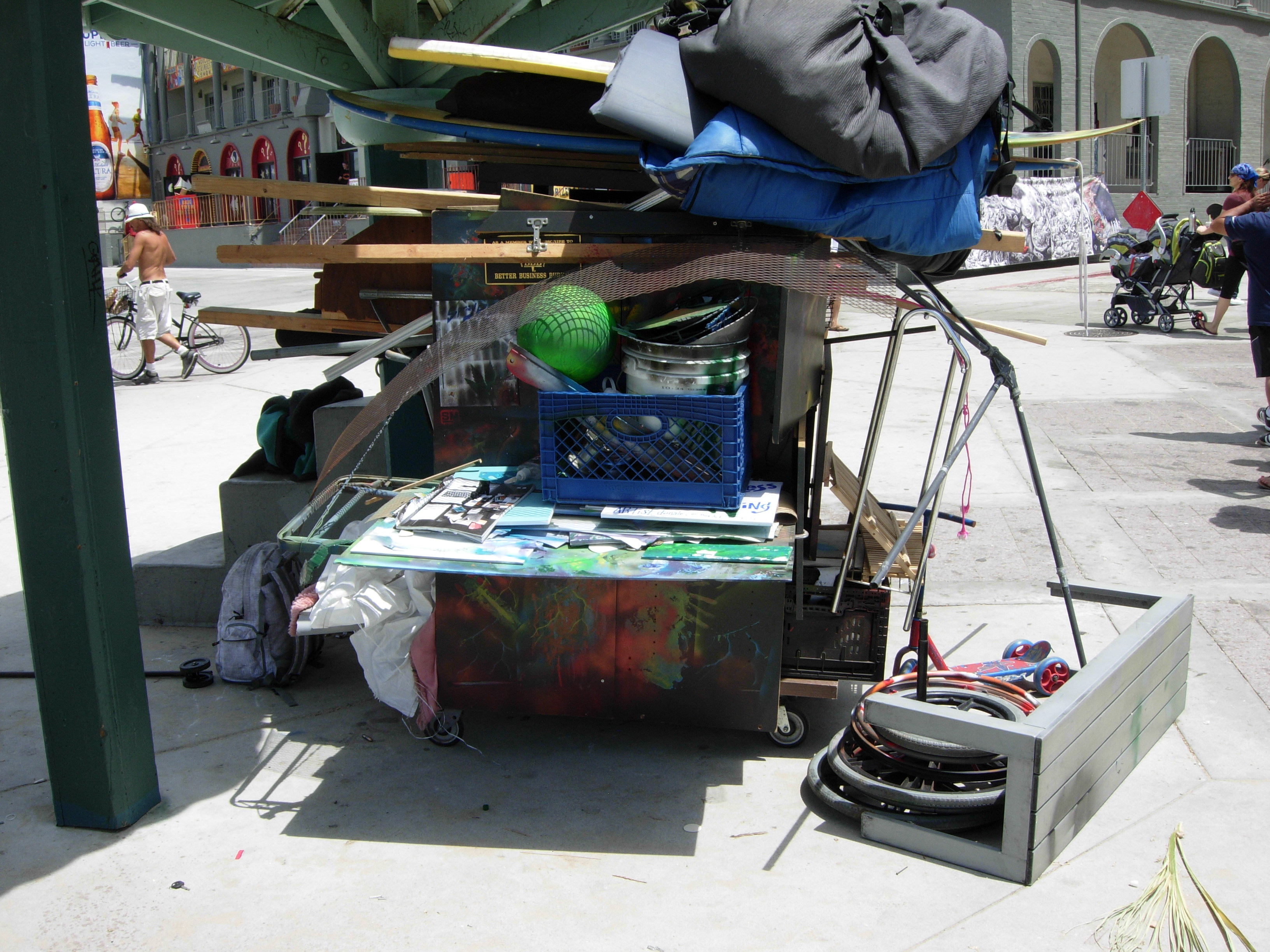 ABOVE: All of this would be banned from Venice Beach – day and night – under the already adopted parks ordinance (LAMC 63.44).

An effort by the majority of the Los Angeles City Council to take a bold, new direction to addressing troublesome encampments throughout the City remains gridlocked due to the objections of Mayor Eric Garcetti and a small band of councilmembers on the Homelessness Committee, including Councilman Gil Cedillo and our own councilman Mike Bonin.

In the meantime, the Council’s Homelessness and Poverty Committee took up proposed amendments by Councilmen Cedillo and Bonin, the latter’s proposals incorporating the Mayor’s concerns. Taken together, the amendments will so weaken the sidewalks ordinance as to render it unenforceable.

The most troublesome aspects of the Garcetti/Cedillo/Bonin amendments that were voted out of committee would have removed a misdemeanor charge for violating the sidewalks ordinance, added a near-impossible requirement for city employees to separate personal documents, medications and other personal items from everything else found on a sidewalk, and the requirement that the City offer storage facilities within two miles for items seized before the City could clear a sidewalk.

The cost of this latter proposal is astronomical. As we have pointed out, it would be far better to spend that money on aggressive non-profits like the LAPD Homeless Task Force or the Teen Project to house the homeless, place them in rehab or provide transportation back home to safe, welcoming family members. (Venice Stakeholders Association recently reimbursed the Teen Project for bus tickets to send two young fellows home, one to Chattanooga, Tennessee and the other to Orlando, Florida.)

The new ordinance banning storage of anything in any park (LAMC 63.44) is an innocent victim in all of this. Enforcement is being held up because changes in the sidewalks ordinance might suggest a few minor changes in the parks ordinance to maintain consistency in the municipal code.

VSA have lobbied for the Mayor to let the parks ordinance go into effect immediately. In addition to stopping the overnight storage of anything in a park, which would in our estimation depress the number of people who are, in effect, living along the Boardwalk while storing their stuff in the park, the ordinance also would prohibit taking anything into the park during the day that would not fit into a 50 gallon trash bin (with the exception of beach umbrellas).
So, tents, mattresses, furniture, bike frames, bike carts, shopping carts, etc., would be banned day or night from the Venice Beach Recreation Area and could be removed by either Rec. and Parks or Bureau of Sanitation staff. This is similar to the practices that Santa Monica follows to keep their park areas along the beach clean and inviting.

The new, stricter sidewalks ordinance (LAMC 56.11) was championed by San Pedro Councilman Joe Buscaino. He was an LAPD officer for many years, serving as a Senior Lead Officer in San Pedro right before being elected. Councilman Buscaino has plenty of practical experience with enforcing the several ordinances that apply to parks and sidewalks and made a point of consulting with frontline LAPD officers and Bureau of Sanitation staff in drafting the new ordinance. Unfortunately, one cannot say that Garcetti, Bonin or Cedillo took the same care to talk with those who are charged with implementing the ordinances, instead relying on shibboleths like “don’t criminalize the poor” and “exempt personal documents and medications” to guide them.

As I have written before, societies need laws to prevent noxious behavior by one group from impinging on the quality of life of another. The occupation of sidewalks as camping grounds right next to residences is one behavior that should be prohibited, whether it is by the truly poor, or voluntarily poor young “travelers,” or those who could work but choose a hippie, druggie lifestyle along Venice Beach because for the moment it is allowed.

On the latter concern – personal documents and medications – Garcetti, Cedillo and Bonin have failed to realize that the Lavan Decision requires that most items seized from the sidewalks be stored for 90 days for later retrieval by the owner, so there is no need to have city staff separate them out so they won’t end up in a landfill. The new version of 56.11 also allows the owner to simply remove the items during the 24 hour notice period and they won’t be seized.

(Why anyone would choose to leave documents and medications unattended on a sidewalk is beyond my imagination. When I backpacked around the world many years ago I never left my passport, cash, credit cards, glasses or prescribed medications unattended. I kept them in a small daypack that went everywhere with me.  But if anyone does this, these items will be stored for later pickup, not disposed of.)

Apparently there have been extensive discussions between several of the council offices, the Mayor’s Office, the City Attorney’s Office, the LAPD, and the Bureau of Sanitation and its Watershed Protection Unit towards finding a middle ground between the Mayor’s and the Homelessness Committee’s amendments, on one hand, and the stricter, original language of the ordinance, on the other hand, which is favored by a majority of the Council. It’s all a work in progress.

In the meantime, VSA urge the Mayor to let both ordinances to go into effect as written, which could take a couple months to be fully operational anyway.

On the other side of the homeless equation – provision of more services and housing – Los Angeles Times writer David Zahniser recently confirmed my earlier assessment that little of the $100 million pledged by the Mayor and several members of the City Council has been identified (other than some already expected grant funds). With the City still facing a structural budget deficit each year and several recent multi-million dollar legal settlements, including $1.4 billion over 30 years for sidewalk repairs, the Mayor’s pledge is simply wishful thinking.

Mark Ryavec is president of the non-profit Venice Stakeholders Association. He formerly served as a Legislative Analyst for the LA City Council and as Chief Deputy Assessor for LA County.