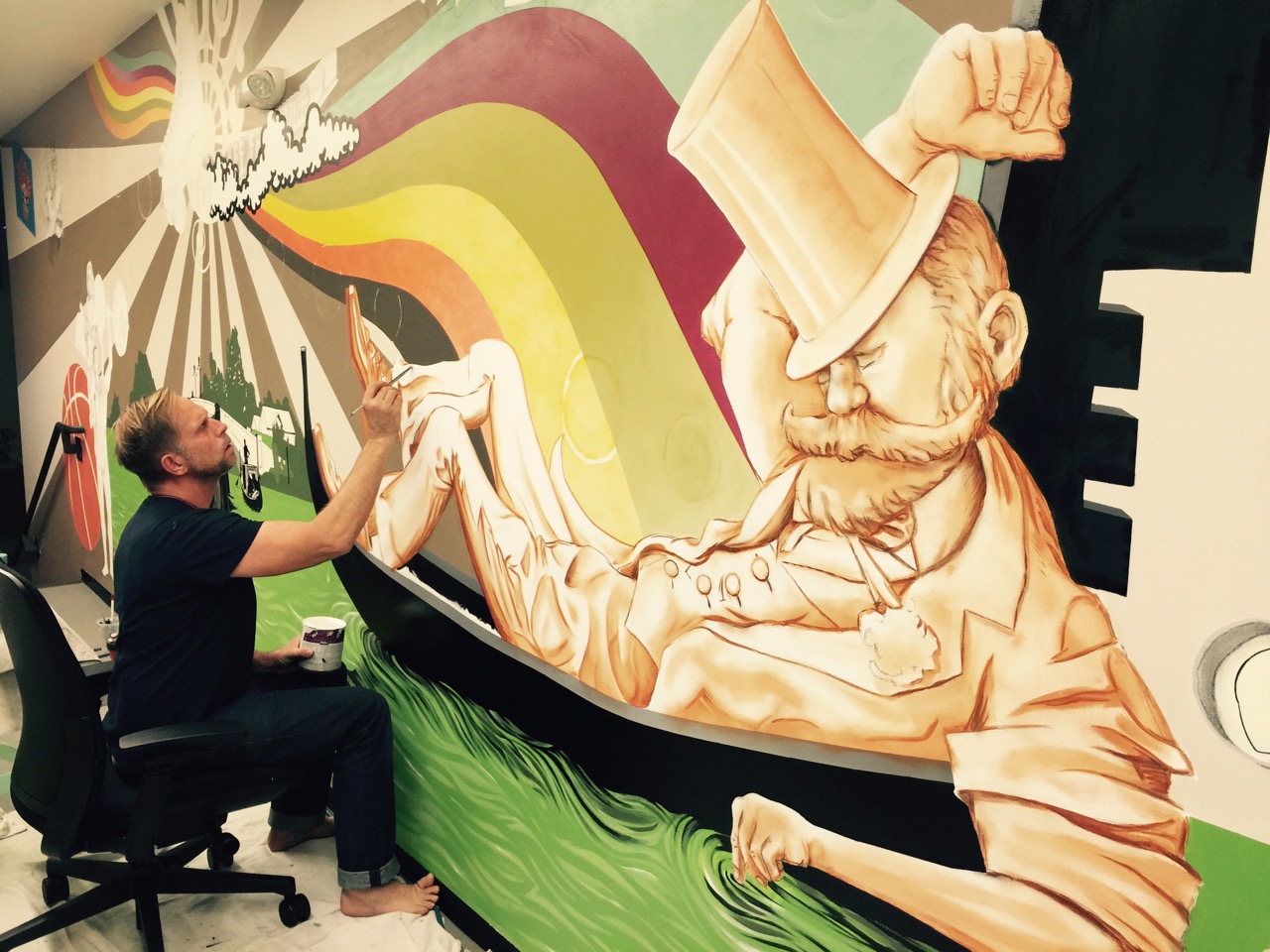 Patrick Marston is one of Venice’s busiest artists. A resident of the area for almost 15 years, Marston’s painting career has evolved recently, from gallery work to large commissions for companies like Google. Yo! Venice spoke to Patrick at his studio home in Venice, where he lives and works with his partner, musician Michael Brunt, who also helps him manage their day-to-day lives. Patrick’s work can be viewed online at his website, patrickmarston.com.

So first, just tell me about yourself.

Right on. I’m from Connecticut, I was born there, and I got into art because it was the only thing I could do well at a young age. I’d started when I was around four, and my mom saw that I had this ability and she made sure I was getting fed the stimulus I needed, and sent me to summer art camps and stuff, and I just really focused on that in school. It came easy and I really enjoyed doing something well, so I just started young and kept going.

And where did you go to school?

I went to college at Flagler College in St. Augustine, Florida. It’s a four-year liberal arts college, and there I got my degree in commercial art. That panned out for a while, I ended up right after college, becoming the visual merchandise manager for a department store, and then after that I worked for Disney as a graphic designer in the human resources department. Then I segued to working for a small staff for Euro Disney that put together orientation and training videos, so I was able to use my degree, but I learned my real passion was fine art. And ever since I’ve been developing my painting and working on that.

Has that been mostly mural painting?

Right now, I’m starting to call myself a visual artist, because I have fun with, and am rather prolific now in a number of mediums. One is acrylics and oils, and what I’m I guess known for locally is a successful series I did of iconic fish. They were all around six-by-six feet, and I was lucky enough to have an artist manager for a while at a place called Neptina on Abbot Kinney, where my work was in the window often. So that got me a lot of good exposure. I only started on the murals in the middle of last year, and I’m on the third right now. One was for this developer who did a residential area in Mar Vista, and I did a fish mural for his wall. Then I was asked to do the mural for the Google building, which I just finished. My name was mentioned at the last minute and I was lucky enough to do it, and the project took about six weeks. I’m working right now on a mural at Apex Aquariums in Culver City.

Besides that, I’ve been working on a thing called “Planted Art,” where I make artistic designs with drought-resistant plants. People also hire me to go to their gardens and make bigger 3D designs. That’s why I’m starting to call myself a “visual artist” rather than just a painter.

How long have you been in Venice?

For about 15 years, I think it will be 15 this March. It’s flown by, and I still feel like a newbie here sometimes.

What about Venice inspires you and your work? What do you like about it?

I love the history of Venice. I love the story of Abbot Kinney and what he set out to create, but I also love the bohemian history of Venice. I feel like sometimes I came on too late. I know we’re going through a huge transformation in Venice right now, and the real estate for artists and actors and writers to live here are is getting sort of priced out, so I am really extremely grateful for the situation that I’m in with my apartment and being able to tag myself onto the history of Venice at the latest point that one can.

Do you have a favorite series?

I have so many for different reasons. I guess my favorite would be the fish, but it’s also what I’m working on right now, because it’s good to have creative challenges, and the new series is about Venice in a new visual language. Also, as a side note, I don’t know where I would be without Michael; he’s been as much a part of the creative process as anything else. I am also proud of my recent commission work because clients push me to go somewhere I usually wouldn’t. And like I was saying before, I am really grateful to be here as Venice goes through an interesting evolution and be able to identify as part of the “bohemian” arty community, so my Venice series is really great to express that.

The near future is that Google was so happy with the mural that they thought it would be an excellent tool to acknowledge the Venice community because the mural is Venice themed. They purposely picked someone from the community to do it, and it’s exciting that I got to be that messenger.