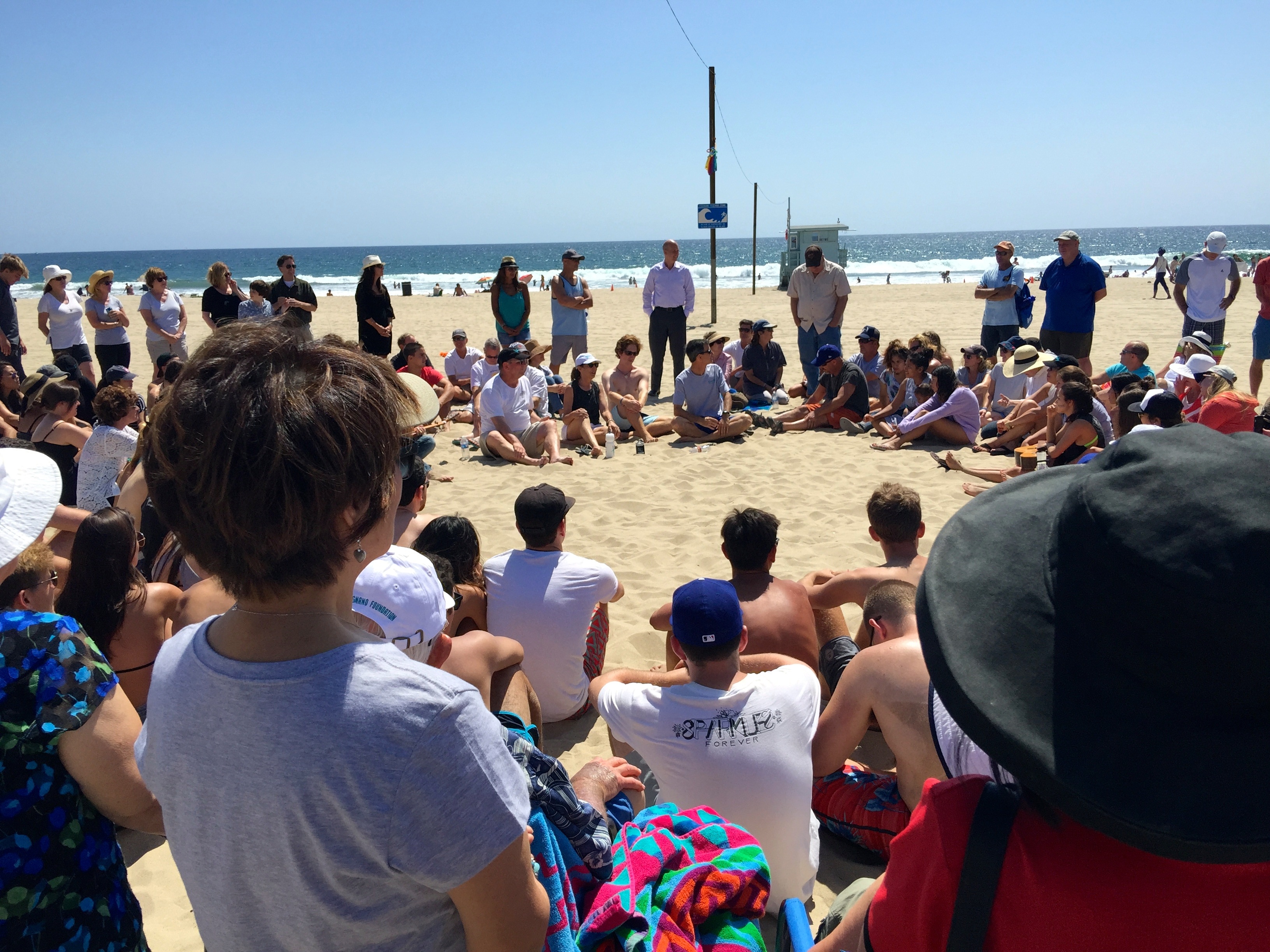 It was just over a year ago that 20-year-old Nick Fagnano had come to Venice Beach with a group of friends. Hot and sandy from playing volleyball, Fagnano told the group he was going to jump in the ocean to wash off.

Marina del Rey resident Antonio Posa was also on the beach with friends that day. Like Fagnano he too made his way down towards the water.

“I got up to go get ice cream for everyone from one of those guys that walk along the shore,” says Posa.

Still on the wet sand but heading back up the beach, ice creams in hand, Posa heard what he thought was a giant explosion.

“All I remember is hearing the loudest bang, then everything went black,” says Posa.

When Posa came to, he was lying flat on his back in the sand.

“My wallet was still in my hand but the ice creams were scattered all around me,” says Posa. “I couldn’t hear at first but I could see everyone rushing around like crazy. I had no idea I’d been hit by lightning, at first I thought it was a bomb.”

Further up the beach at the Volleyball nets Fagnano’s friends were growing anxious. They’d searched the public restrooms, and the crowded beach, yet Fagnano was nowhere to be seen. They alerted a lifeguard and a search of the water by the pier began.

Witnesses said it had come out of nowhere, a big dark, storm cloud on an otherwise sunny afternoon and from it shot the lightning strike that fatally hit Fagnano, injuring 13 others.

To mark the first anniversary of the strike and to celebrate the life of Nick Fagnano, on July 27, 2015, friends, family, and LA CountyLifeguards gathered on Venice Beach.

“The first thing I saw was the lifeguards over here, and we have grown to know them, and to love them, and to thank them for what they do,” said Jay Fagnano, the father of Nick Fagnano, as he addressed the crowd.

One at 2:30 pm, marking the approximate time of the lightning strike.

Friends and family held hands, forming the shape of a huge heart on the beach, while offshore, from a boat, the LA County Lifeguards fired a water canon high into the sky.

The second tribute at sunset saw just over 100 people gathered in a big circle, the LAPD helicopter circling overheard, blasting a short whoop of its siren in honor of Fagnano.

“So many people loved Nick,” said his mother, Mary Fagnano. “When he used to work at the Ace Hotel in Downtown his nickname was Sparkles – he just lit up the room.”

The gathering not only celebrated Fagnano, and the community he had created throughout his life, but was also an opportunity to reflect on all the work done over the year in his name, through the Thrive in Joy Foundation, and also, in beach safety.

On June 30, 2015, for the first time, LA Country Lifeguards closed all beaches due to lightning. A precaution instituted after last year’s lightning strike.

The Thrive in Joy Nick Fagnano Foundation, a charity created by Fagnano’s parents in order to continue their  son’s impact on the world by encouraging and rewarding character through education and recreation, has so far this year built an endowment in Nick’s name providing an annual scholarship for a transfer student to USC’s Sol Price School of Public Policy whose mission is to “improve the quality of life for people and their communities here and abroad.”

Along with this, the Foundation has presented financial awards for outstanding character to a graduating student at Nick’s two alma maters: St. Brendan grade school in Los Angeles and Notre Dame High School in Sherman Oaks. As well as providing support for two Dominican Republic projects:  Collegio de Tia Tatiana, a school for preschool through high school students as well as Remar, an orphanage in one of the poorest urban communities in Santo Domingo.

The Foundation’s Dominican Republic initiatives where inspired by a charity drive for baseball equipment Fagnano had arranged when he was only 13. The young baseball fan and little leaguer was moved to action when he heard of young people in the Dominican Republic who were unable to play because they had no equipment.

The work being done in Fagano’s name is a sparkle of light in what has been a dark year for close friends and family.

Fagnano’s parents say they are now forever connected to Venice.
A week after the lightning strike the couple came to the pier.
“We discovered the 30th Avenue neighbors had put up a memorial to Nick, so there’s something incredibly special about this community and the way that they’ve connected to Nick,” said Mary Fagnano.

“Maybe every three or four weeks we come down, take a look at it,” said Jay Fagnano. “We spruce it up a little bit, but there’s always a new plant, new flowers, or a new candle. The original message from the 30th Avenue neighbors is still there and it’s one year later and it’s weathered all these storms. So there’s a connection to Venice that is very powerful.”