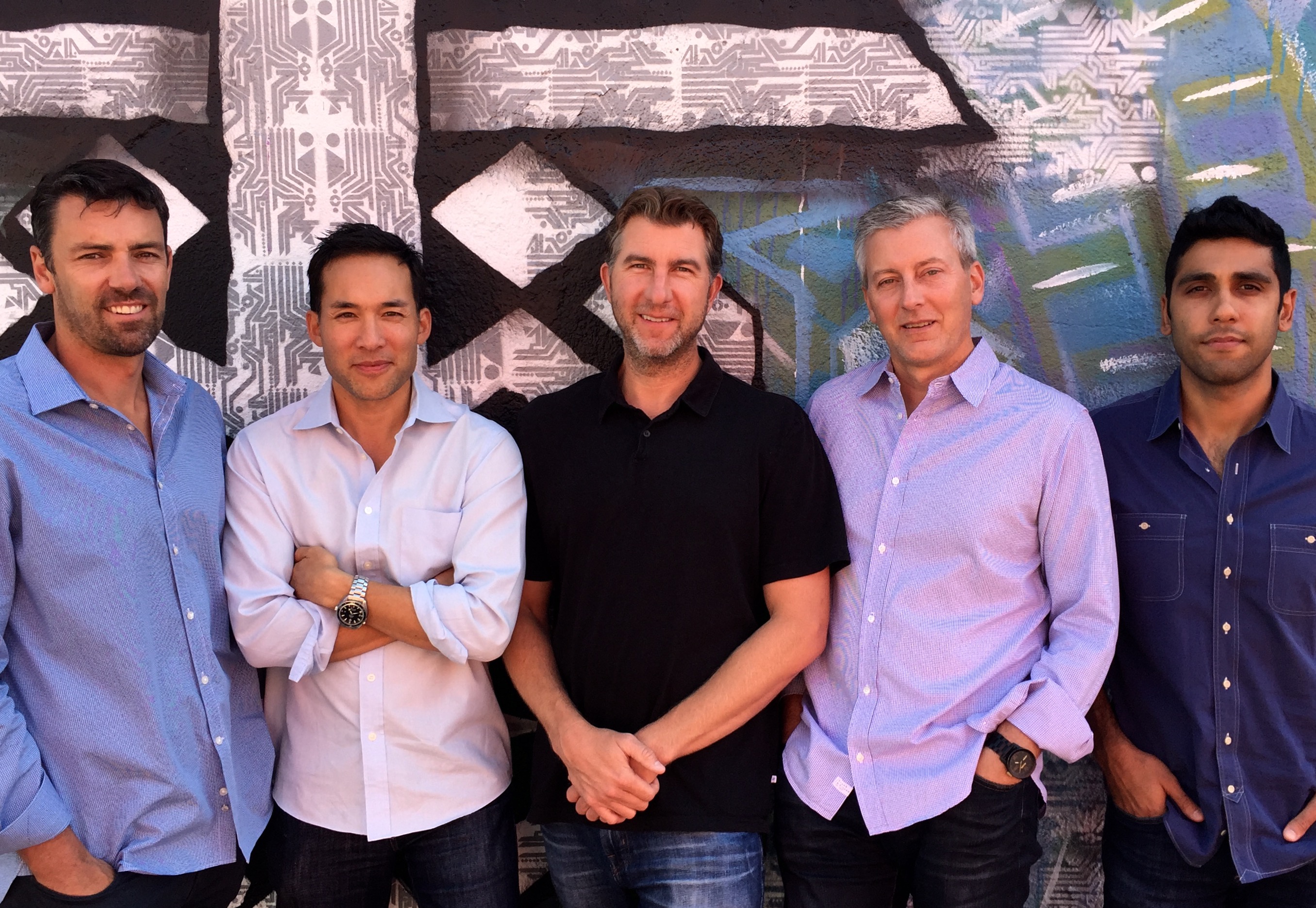 A private jet tears out of Santa Monica Airport, shooting up into the sky. As it passes overhead, sitting at the CrossCut Ventures office on 4th and Rose Ave., in Venice, one can’t help but draw a comparison to the soaring plane and the sky-rocketing venture capital firm that recently raised a cool $75 million for a fund targeting Los Angeles start-ups.

Co-founder and managing director Brian Garrett explains how the company, after raising a $5 million fund in 2008, eventually came to find their home in Venice.

“We were kind of running the fund out of coffee shops all over L.A., meeting entrepreneurs, meeting wherever we could as partners to decide what investments we made,” says Garrett. “We raised a $16 million fund in 2012 and still continue to run that. Really it was the tail end of 2014 when we could see that we were about to go raise our third fund and we knew that a critical part of our brand and personality in this ecosystem was to set up permanent offices in Venice. We always talk about catalyzing the ecosystem and so having office space like this building where we can throw events and have people come through with regularity was a critical part of bringing the community together.”

Garrett explains that while Venice has been a good place for the venture capital firm to set up shop, the current tech boom is not a Venice-only phenomenon.

“There’s probably six or seven pockets of innovation across the greater L.A. area everything out to Simi Valley, to Sherman Oaks, to Pasadena, to Downtown L.A., Hollywood, Culver City, Venice, Santa Monica, Playa de Rey, and Manhattan Beach, and we have companies in almost all of those areas,” Garrett says. “The bulk of them happen to be in, what they are calling Silicon Beach, though we don’t really use that phrase. I think we try to blend in as best we can, with a relaxed vibe to our office and how we go about our business.”
The CrossCut Ventures team of managing directors are all formerly entrepreneurs. Garrett says this helps them have a greater understanding of what the entrepreneurs behind the start-ups they choose to invest in are going through.

“We understand that this stuff’s really hard, building these companies you either get extremely lucky and catch lightening in a bottle or you grind it out, day-in-day-out trying to figure out how to bring scale around an idea, a concept, a business and you need as much help as you can get,” says Garrett.

Little, a start-up that makes apps for smartwatches, is one of CrossCut Venture’s portfolio companies. The team works out the first floor space at CrossCut’s Rose Ave. office.

Garrett says their Venice location is convenient to many of the company’s start-ups.

“We’re on the border of Santa Monica and Venice right here on Rose and I joke, but I skateboard or ride a bike to a lot of my meetings,” he says.

Born and raised in Los Angeles, Garrett says it’s the work/life balance that Venice has to offer that is attracting the tech entrepreneurs to the beachside community.

“I keep seeing more and more people now from Silicon Valley relocating down here to start their third or fourth company, you ask them why, and they’re doing it for lifestyle reasons,” Garrett says. “I was born and raised here but that’s always what’s attracted me to L.A. is that balance. I got up this morning and I took my son and his friend surfing before I came to the office. You just don’t see that happening in Silicon Valley, it’s sort of a one track mind set on what they do. So people start to realize that quality of life and balance in life is important and this is a pretty good place to find that balance. My partners and I do yoga here in this office and we run across to Yoga Collective when we can, and we take out stand-up paddle boards and we surf at the Venice Breakwater but we also work our butts off and that balance is something that I think this community is very supportive of.”

Could it be, however, that the promise of this kind of work/life balance that is attracting these types of entrepreneurs to Venice, the very thing they’re inadvertently eroding, creating an imbalance?

“Unfortunately or fortunately there are so many compelling characteristics of this coastal lifestyle that there’s less supply than there is demand and so that naturally inflates these types of ecosystems both on real estate, rental rates, you name it,” says Garrett.

“I don’t want Venice to lose its authenticity and the truth is the technology community is not super in line with that original vibe, but I think landlords are opportunist and capitalist and have every right to maximize the dollar they make on their real estate and if you’ve got people that want to pay five to seven bucks a square foot that’s in their right to accept those kinds of offers,” Garrett says.

Unfortunately I don’t think the artist community can support those kinds of rental rates and so there’s obviously tension there on that topic. I don’t have any answers. Can the city get involved in some capacity and maintain, rent control, or whatever it might be so that that balance exists? Right now it seems to be moving in the wrong direction.”

From a commercial property stand point, Garrett says it’s now reaching a point where it’s hard even for the start-ups that have flocked to Venice to stay.

“The rental rates have probably doubled from what we’ve seen in the last two years and you take a company that’s raised a million of seed funding, it’s very hard for them to justify $20,000 a month or even $10,000 a month when that could be another engineering hire,” he says.

Local developer Frank Murphy has conducted an independent study into property trends going back in the past 50 years. He found that while there had been a 100 percent increase in dwelling units across Los Angeles over the last half century, on the Westside that increase was smaller at 20 percent, and in the Venice 90291 zip code there had in fact been a 1 percent decrease in dwelling units over the past 50 years.

Murphy says there has been practically “no housing increase over 50 years in Venice” and this has had a big impact on driving up prices. There simply is an under supply of houses to meet demand.
It’s a demand that is seeing even the tech employees priced out of Silicon Beach.

“The other issue that I think’s popping up, as apartment and house rental rates go up the startup salaries that are being paid do not make it possible to afford to live in Venice so you end up recruiting engineers that are living out in the Valley or living in Downtown LA and they’re commuting which causes more congestion and more traffic and a way to answer that problem is to move a little bit east to put yourself more central so those people can reduce their commute but then you lose some of the cool vibe and edginess of building your startup, like Snapchat did, on the beach in Venice,” Garrett says. “So it’s a constant shuffle back and forth of trying to find the right balance for each company and each company’s culture.”

Garrett explains that for one of his portfolio companies, StyleSaint, an online women’s apparel brand started by entrepreneur Allison Beal, it made more sense to move out of Venice.

“We moved into the arts district because we were recruiting engineering talent and apparel design talent from that side of town and it didn’t make sense for them to commute all the way to Venice,” Garrett says. “We started the company right there on Main and Rose and now it’s in the arts district, and it’s been a lot easier to recruit.”

So it seems that on many levels balance is the key. As companies like CrossCut and the startups they invest in find their own balance so must Venice. Ultimately, just like the jets that shoot up out of Santa Monica Airport, at some point they have to come back down to land.

“We joke that after we finish raising our fund we’d be happy to see a correction we actually think it brings a better balance, better ideas, more long-term consistent investment money as opposed to everybody chasing because it’s a hot, sexy thing to be doing so we like to see those corrections and everything’s on a cycle,” Garrett says. “So we’ve seen three of them in our lifetime as investors, Rick and I. Things will correct.”

In the meantime Garrett says they feel very fortunate to work with a great set of entrepreneurs and they believe there are more and more extremely high quality entrepreneurs popping up in the L.A. tech ecosystem, which is why they feel fortunate to be here with a new fund.