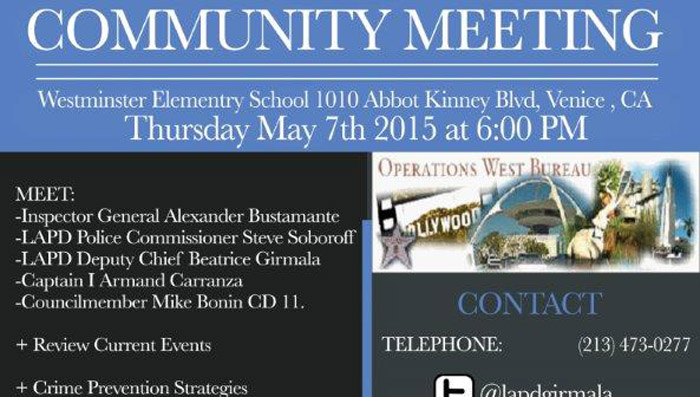 Los Angeles Police Chief Charlie Beck and the union representing the LAPD rank-and-file find themselves deeply at odds today over the officer-involved shooting death of an unarmed homeless man in Venice, with the union livid over Beck’s suggestion that it was excessive.

The shooting occurred around 11:30 p.m. Tuesday on Windward Avenue just west of Pacific Avenue. The homeless man was black, as was the officer who shot him.

Police said two officers initially responded to a call about a person harassing people on Windward Avenue. They spoke briefly to the suspect, who walked away toward the boardwalk, police said.

The officers returned to their car but then saw the suspect struggling with someone — apparently a bouncer at the Townhouse bar — on the sidewalk. The officers approached and a struggle ensued, ending with the shooting.

It’s unclear how many shots were fired. The suspect died at a hospital.

The suspect’s name was not immediately released, but acquaintances identified him as 29-year-old Brendon Glenn, who came from New York City and struggled with drugs and alcohol. Glenn had sought shelter and assistance at The Teen Project’s Venice P.A.D. homeless center, according to the center’s Timothy Pardue.

Beck said Wednesday after seeing video footage of the incident that he is “very concerned” about the shooting, adding that it generally takes “extraordinary circumstances” for police to shoot an unarmed person, and it’s unclear if those circumstances existed in Tuesday night’s shooting.

The chief said Los Angeles Police Department investigators had not yet interviewed the officer who opened fire on the suspect because he was still on medication after being treated for a knee injury suffered in the altercation.

“I don’t know what was in the officer’s mind,” Beck said. “We expect to know more tomorrow (Thursday). At this point, it appears that it was a physical altercation.”

Craig Lally, president of the Los Angeles Police Protective League, the union that represents LAPD officers, called Beck’s comments “completely irresponsible” and said it is too early to suggest the shooting may have been improper.

“As the final trier of fact in the use-of-force investigation and disciplinary process, the premature decision by the chief essentially renders the investigation process void,” Lally said.

“Additionally, by making his opinion public without having all of the facts, he influences the investigation for all parties involved, including his command officers and the public.

“As in the criminal justice system, everyone is innocent until proven guilty. We encourage everyone to reserve judgment until the investigation has run its course, and the facts are collected and assessed,” Lally said.

Beck said the department is working with the District Attorney’s Office and the LAPD’s independent inspector general to investigate the shooting.

“We will expend all resources to find out the truth of what happened last night on Windward Avenue,” he said.

Beck said a town hall meeting will be held tonight with LAPD officials and Inspector General Alexander Bustamante to discuss the shooting with residents. City Councilman Mike Bonin is also expected to attend the meeting, which will be held at 6 p.m. at Westminster Avenue Elementary School, 1010 Abbot Kinney Blvd.

The reaction of Venice residents was hard to predict; many of them deeply resent the homeless population in their community.

People who knew Glenn told the Los Angeles Times that he was a kind man who constantly told people he loved them. He was known for his “hand hugs” — grabbing hold of someone’s hand before saying goodbye. Glenn treated his black Lab mix, Dozer, like “his baby,” one man told the newspaper.

But they acknowledged he also had his struggles, The Times reported.

“He was a drinker. He has a drinking problem,” Allison Holden, 23, who is also homeless, told The Times. “But we all have problems.”

By Yo Venice Staff May 7, 2015
Tags: featured in Venice Beach Opinion
Related Posts