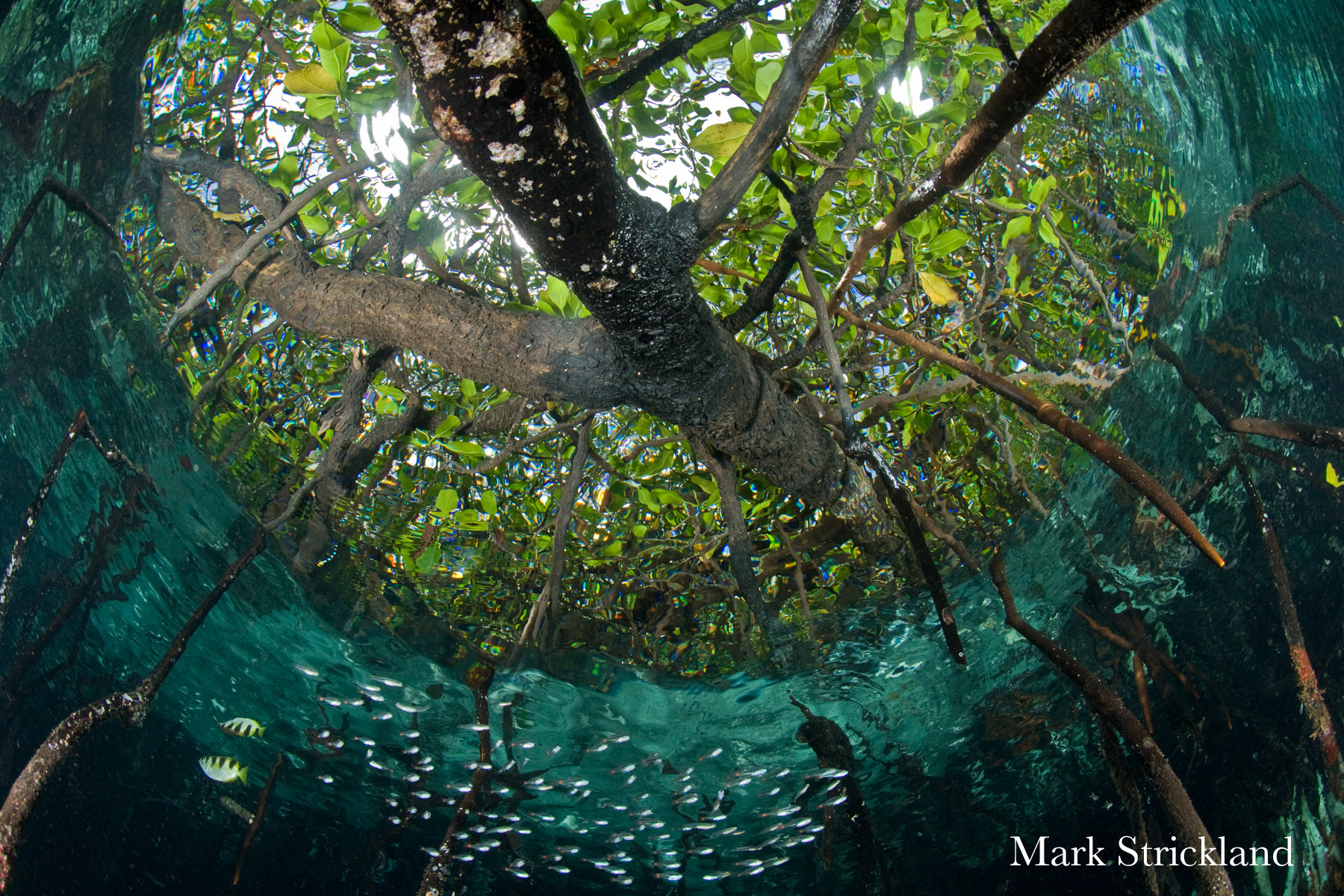 Committed to promoting the appreciation and conservation of the natural environment, G2 donates all art sales to environmental charities.

Currently, the gallery is featuring “From Snails to Whales,” an underwater photography exhibition from famed photographers Mark Strickland and Chris Huss.

The vast exhibit features underwater images spanning nearly 40 years of photography and five different oceans areas. The show, which ends April 19, is free and open to the public.

Why is this exhibit and particular collection of photographs important to you?

As an underwater photographer, I feel very privileged to experience the stunning beauty and diversity of a world that many people never have a chance to witness firsthand. Being able to share that experience with others through images is a great pleasure, especially when it helps people appreciate the ocean in a way that was previously unfamiliar.

This particular collection of photographs is meant to highlight and celebrate the tremendous biodiversity in the world’s oceans. In doing so, we hope to encourage viewers to care more about the marine environment and ideally take action to improve the health of the world’s oceans. Such positive action could happen in many ways – participation in a beach clean-up, advocating for marine preserves, living a more environmentally sustainable lifestyle…the important thing is to do something rather than nothing. One aspect that’s especially great about “From Snails to Whales” is that it’s hosted by G2 Gallery, which donates all profits to worthy conservation groups, in this case Wild Aid.

What about the ocean and marine life is important to you and your work?

The oceans, especially coral reefs, rival tropical rainforests for biodiversity, and this “variety of life” is essential for a healthy environment. As with terrestrial habitats, marine ecosystems are fundamentally linked to complex relationships among species and their habitats. Because of this interdependence, every species is important…if one becomes extinct, it affects all other species in that ecosystem. Furthermore, studies show that when environmental stresses occur, habitats with high biodiversity are more resilient than those where species have been depleted.

While necessary for maintaining a healthy balance of life, biodiversity also provides us with a wealth of natural beauty. For photographers and other artists, there are a seemingly endless variety of subjects. Adding to this appeal is the great variation of habitats found in different regions and climates around the world, each supporting a unique community of life. “From Snails to Whales” aims to focus on several of the most biologically productive and visually enticing regions and highlight some of the fascinating and beautiful creatures that live there.

Over how many years were these pictures taken?

I started taking underwater photos in 1976, but most of my images in this exhibit were taken from the early 1990’s onward.

Many were shot on film, with cameras that seem quite primitive by today’s standards. Other, more recent shots, were taken with the latest digital equipment, which has certainly opened up many new possibilities for underwater imaging. Still, nothing is more important than familiarity with the subjects and their preferred habitats, along with investing the time and preparation to be there when something great happens.

Which oceans did you photograph in?

“From Snails to Whales” features images from five loosely defined regions: the Caribbean, Eastern Pacific, South Pacific, Southeast Asia, and the Coral Triangle. Each of these regions has its own special charms, but the Coral Triangle, which extends from western Indonesia to the Solomon Islands and north to the Philippines, is special, as it’s widely recognized as having the greatest marine biodiversity on the planet.

What is your favorite photo on display at the exhibit?

Wow, that’s a tough one, but Chris’ shot of the manatees cuddling, “Nuzzling”, and all of his orca images. Of my photos, among my favorites are “Full Sail” (sailfish chasing sardines), “Ladybugs” (tiny amphipods on blue tunicate), and “Humpback Trio” (trio of Humpback Whales, rendered in black & white).

Why is this exhibit and particular collection of photographs important to you?

There are a number of reasons why this exhibit and collection of photographs are important to me which is also why this particular exhibit was so exciting and satisfying to work on. First, the theme of celebrating biodiversity is personally important because one of the main reasons I love going underwater is to experience the incredible variety and beauty of the sea life. Building on that reason, is that this theme also provides the perfect “excuse” to share many of my all-time favorite images that might not otherwise be published or shown. I get the most satisfaction photographing images that would be considered more art then photojournalism which limits their overall marketability but makes them perfect candidates for this exhibit. I get to show the images that I find most rewarding.

The intent behind “From Snails to Whales” is to help bring awareness to the general public about the need for conservation of the world’s oceans. As with our previous exhibit, “State of the Sharks”, we used the idea that people will “protect what they love”. For both exhibits, our strategy is to first engage the viewer with the beauty of the underwater world and then present them with a positive message that “it is not too late” to help protect our ocean resources.

What about the ocean and marine life is important to you and your work?

Everything! On a purely personal level, I feel most in-tuned with nature when I am in or on the water and, for this reason alone, everything about the ocean and marine life is important to me. Unfortunately, during my lifetime I have witnessed enough changes to convince me that the planet, as a whole, will eventually reach a tipping point where it will be too late to reverse all the damage we have done. On a professional level, this is the single greatest influence on the projects I choose to work on.

Over how many years were these pictures taken?

My oldest image in the exhibit was taken nearly 40 years ago using a home made housing. I was just a teenager when I started taking photos underwater using an instamatic film camera protected by a plastic bag. I also had a passion for filmmaking so I built a Plexiglas housing for a 8mm film camera using part of a bicycle tire inner tube for a sealing gasket. That housing worked so well that I was encouraged to build another housing for an SLR film camera and, with that, I was able to start taking professional quality images underwater.