As announced here in January, CicLAvia will run from Downtown LA to Venice on April 21st. Locally, the route will run from Windward at the beach, under the Venice Sign and through Windward Circle, up Grand and then head downtown via Venice Blvd. The route is approximately 16 miles long. Our friends at Streetsblog sent us the official map that was released today! 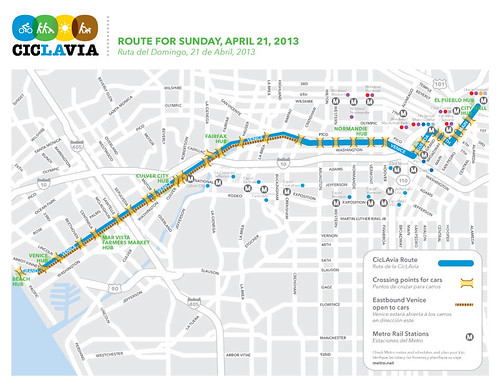 During the event, CicLAvia will repurpose Venice Boulevard from Figueroa in Downtown LA to Ocean Front Walk in Venice from 8am to 5pm (eastbound auto traffic will be allowed from Abbot Kinney to Crenshaw), encouraging residents to walk, bike, skate or blade the route. Get out and enjoy your city on this special day!