NASA unveiled the design of its long-awaited post-shuttle super rocket Wednesday, a gargantuan Saturn 5-class booster intended to propel the agency’s manned Orion crew capsules beyond low-Earth orbit and onto a variety of deep space destinations ranging from nearby asteroids to Mars. 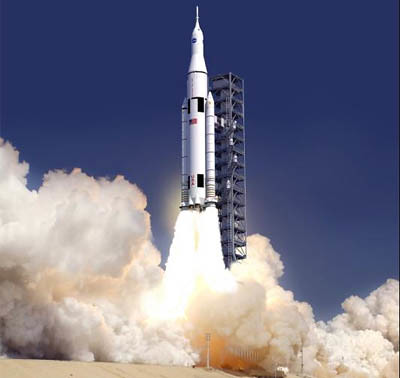 If fully funded and developed, it will be the most powerful rocket ever built, dwarfing the lift capability of the space shuttle and exceeding that of the mighty Saturn 5 that propelled the Apollo missions to the moon.

“This launch system will create good-paying American jobs, ensure continued U.S. leadership in space and inspire millions around the world,” NASA Administrator Charles Bolden said in a statement. “President Obama challenged us to be bold and dream big, and that’s exactly what we are doing at NASA. While I was proud to fly on the space shuttle, tomorrow’s explorers will now dream of one day walking on Mars.”

The initial version of the heavy-lift rocket will feature two five-segment shuttle-derived solid-fuel boosters strapped to a 27.5-foot-wide first stage powered by three RS-25D/E shuttle main engines. The second stage will use an upgraded Apollo J-2X engine, giving the Space Launch System — SLS — rocket the ability to lift 154,000 pounds of payload with a first stage thrust of 8.25 million pounds.

An upgraded version equipped with five shuttle main engines will have a liftoff thrust of some 9 million pounds and be able to loft more than 130 metric tons, or 286,000 pounds, to low-Earth orbit.

For comparison, the Saturn 5 rockets that powered the Apollo moon program stood 363 feet tall, generated 7.5 million pounds of first-stage thrust and were capable of boosting 263,000 pounds of payload to low-Earth orbit. The space shuttle, not counting its own weight, could carry a maximum payload of about 50,000 pounds.