Patch is headquartered in New York City, and claims “We will look for communities of 15-100k population that are drastically underserved by media and would benefit by having access to local news and information about government, schools and business.” AOL has said it plans to spend $50 million on Patch this year.

AOL / Patch is here simply to try and take money from the local community under the guise of being “for the community”. If you have any doubt about this, take note of the fact that AOL / Patch hired Samantha Page to edit and run their “Venice Patch”. Samantha has never actually lived in Venice (she lives in Hollywood), and only has visited our community. This hiring practice by AOL shows both their ineptitude at understanding what hyper local media is and also their total disregard for the community that is Venice by insulting it so.

AOL further shows contempt for our community values by attempting to create a “local site” as a corporate entity in a town that is proven to dislike corporate chains, of which AOL/ Patch is the largest that has ever attempted to do business here. What is next, a WAL-MART?

If you hold stock in AOL, their inept understanding of hyper-local news should likely make you consider selling it.

Venetians: Local News needs your help! If you support the mega-corporate AOL/ Patch through interviews, writing articles, participation on their site or advertising with them, here are the true local websites that you will be helping AOL/Patch try to put out of business:

If you own a local business and want exposure, feel free to email any of the sites above and all of us local news outfits will help you out and give you the exposure you need. If you want to advertise on a local website, don’t support the mega-bankrolled AOL / Patch. They are a gigantic corporation, not locals. Once again, their editor has never even lived in Venice.

YoVenice is a top 25k ranked website in the USA, lots of people read it and we can help you put news about your business out to the community. Content from YoVenice has been picked up by The Huffington Post, Gawker Media, LA Times, NY Times, Washington Post, BoingBoing, CBS, NBC, ABC, Fox News, PBS, Vanity Fair, Sunset Magazine, MetBlogs, LA-ist, Curbed LA and many others that are far too great of a list to name. Contrary to what AOL / Patch would have you believe, Venice is not underserved by media.

If you are local and need exposure, all of us local outlets have you covered.

Expect this site to promote boycotts of local businesses that advertise on AOL /Patch. We will only do so to let the owners know that AOL / Patch is in fact a mega corporation that is attempting to kill off true local media.

If you want to know more about the underbelly of AOL / Patch, click here. 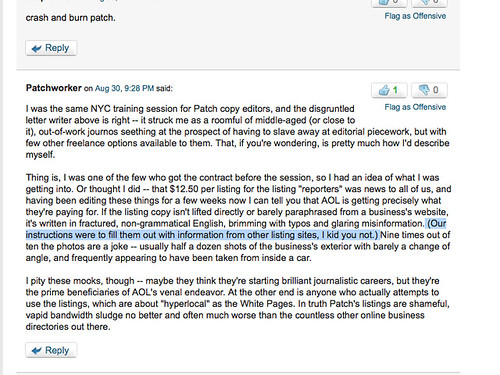