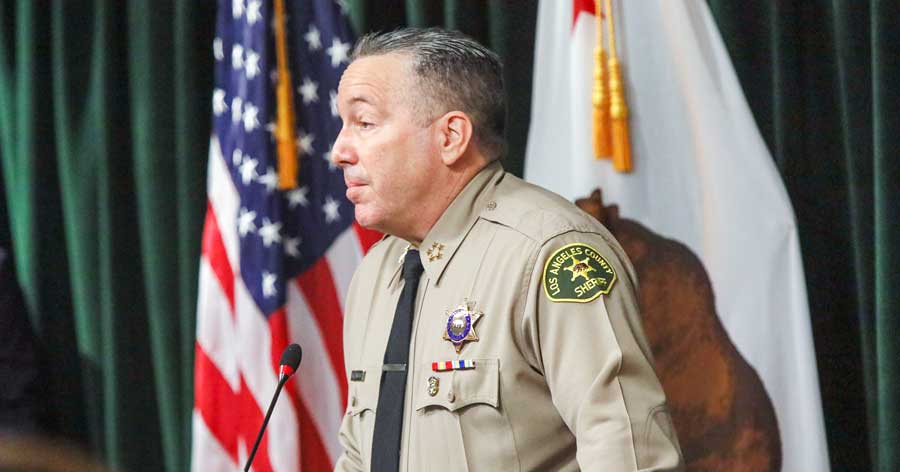 4-1 VOTE BY FIVE LUNA BACKERS TO DISLODGE THE INTEGRITY OF THE COUNTY CHARTER FLIES IN THE FACE OF OPEN GOVERNMENT!

Voters have a right to select the next sheriff of Los Angeles County minus the meddling of a five-member Board of Supervisors that is detached from political reality.

Ironically, having five women implementing this governmental damage to democracy only proves females in politics can be just as counterproductive as five men!

For this anachronistic and arrogant measure to defy the will of voters should they somehow support this measure will turn the Sheriff’s Department, one of the largest law enforcement agencies in the United States into a wholly-owned subsidiary of five political insiders that are accountable to no one or anything!

For what is the public safety resume of these five full-time politicians, handsomely-paid by taxpayers who know very little about the operation of the county sheriff’s department?

The answer is obvious.

So because the Los Angeles Board of Supervisors doesn’t like Sheriff Alex Villanueva personally, politically or otherwise, they have decided to manipulate the charter process with a ballot initiative no one wants or requested.

Compounding the politics of it all, this “4/5th’s initiative” does not apply to the Assessor or District Attorney, and in the case of George Gascon, is under the threat of a second attempted recall as we speak!

Why were both the assessor or district attorney not targeted, but exempt from the foibles of this dysfunctional and whining board?

The Board of Supervisors should have no role in the operation and management oversight of this politically independent office.

Here in Venice, do you believe this Board of Supervisors would have allowed the Sheriff’s 2021 initiative to clean-up Venice Beach last summer?

All are supporters of the deposed, lame duck Council member Mike Bonin, this board would have shutdown the cleaning up of the boardwalk which would have resulted in chaos and further deterioration of what was once the most popular, free tourist destination here in southern California and a favorite of our international visitation!

The direct election of a county executive that would work as an equal co-branch of county government would have prevented this silliness from hacks like Holly Mitchell and her allies on the board too afraid to speak up or speak out!

For how does the largest county in the United States, not have someone in charge in terms of a full-time, directly elected executive?

For this current style of communist collectivism allows a “Gang of Four” the ability to manipulate democracy and throw it out a manufactured political window!

For Sheriff Villanueva is at least elected by all LA County voters, while the current crop of supervisors only represent a specific district, or just twenty percent of the entire county electorate.

For what is democratic or representative about that?

LA County is larger than forty states with over 10,000,000 residents and 82 municipalities.

How does five politically-imbedded insiders pretend or disguise as legitimate and credible representation for a unit of government this diverse and populous?

It does not and cannot.

For if the LA County Board of Supervisors truly cared about democracy, they would have placed on the ballot an initiative to expand the size of this unit of government from five to fifteen, the same size of the Los Angeles City council that has twice the representation and just half the population!

For this backroom, brokered deal was done to influence and undermine the legitimate election of the County Sheriff by four individuals who are pressing their collective thumbs on the scales of justice to create a stacked deck and a truly rigged process!

There was no groundswell of political popularity behind this measure.

Instead Politicians like Mitchell should be candidates for recall as this is an abuse of power under the masquerade of reform.

For most voters have no clue or idea what the LA Board of Supervisors does and the supervisors want to keep it that way.

Of these five, which of these county legislators truly understands how to manage a nearly $40 billion budget, almost half the size of California state spending?

But in Sacramento we have a governor and bicameral legislature that are the stewards of state spending, not five faceless, feckless and feeble politicians for the most part do their business behind closed doors from any sense of accountability and transparency!

This throwing of democracy out of the window with the baby has everything to do with hijacking a process reserved for voters.

For both Villanueva as well as his preferred opponent, retired Long Beach Police Chief Robert Luna would lose any sense of independence to do their job as oversight by the Board of Supervisors will become politics first and responsible public policy left in the wreckage of such a successful referendum!

The voters of LA County have a clear and concise choice in the election for the next sheriff.

Villanueva has been fiercely independent and should not be part of a political purge, a scheme by this gang of four supervisors hell bent on additional powers and responsibilities neither the charter or state constitution currently allows or provides!

Voters should not be “scammed” by these political grifters who don’t respect the separation of power or the goals and objectives of having an independent and non-partisan office of the county Sheriff no matter who is in charge and who the voters ultimately will select come the November runoff.

What we don’t need is the political arrogance of four politicians who are placing public safety second and partisan politics first and foremost.

Vote for who you prefer for Sheriff, but don’t give this irresponsible unit of government unnecessary authority that will end the independence of the operation and management of this important office.

For this is a no-brainer, vote “No” on this hijacking of democracy here in Los Angeles.

Nick Antonicello is a longtime Venetian who covers matters of government and politics and how they effect the neighborhood of Venice. To contact him, e-mail him at nantoni@mindspring.com