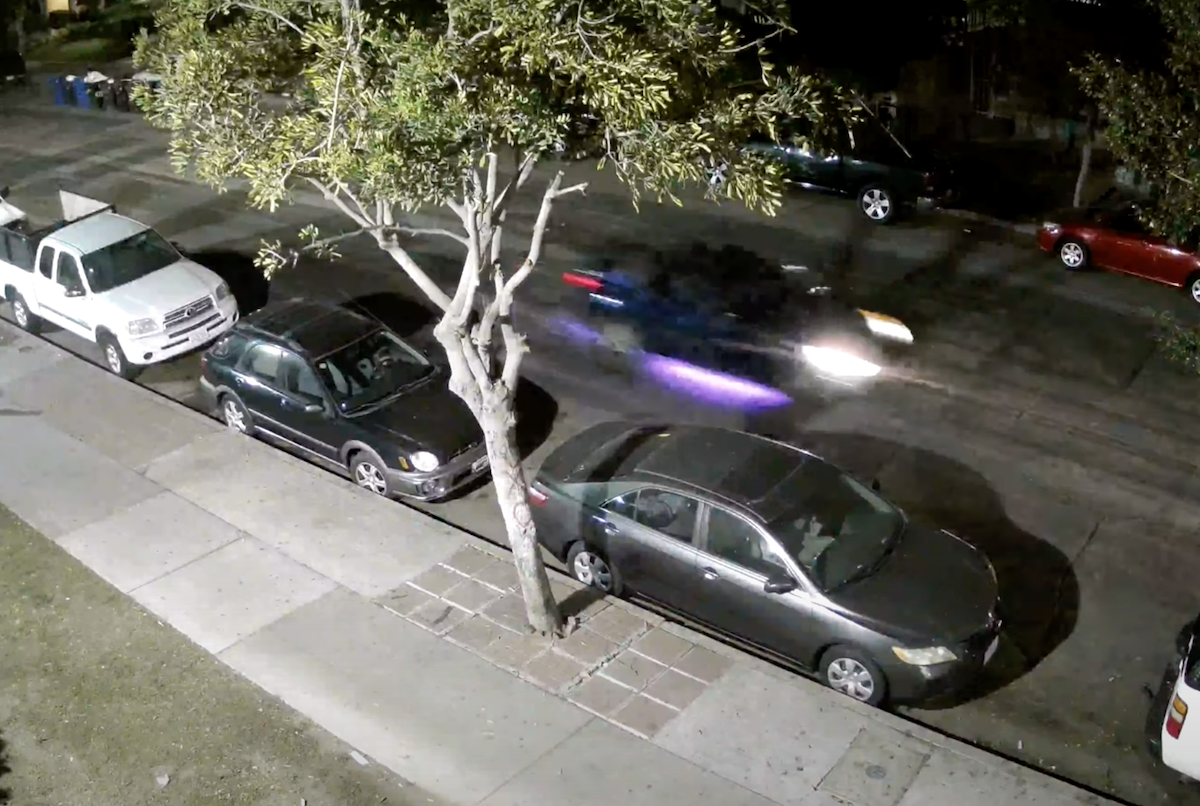 Police are searching for suspects wanted in connection to a recent car to car shooting in Del Rey.

At 1:14 a.m. video footage captured a Blue 2014 – 2016 Hyundai Elantra with exterior neon lights driving into the Del Rey neighborhood. About a minute after, the exchange of gunfire can be heard on video. The detectives later learned that an errant round went through a living room window of a nearby occupied apartment.

Further investigation revealed that either before or after the shooting, the Hyundai Elantra crashed into a pick-up truck that was parked in front of the recreation center. After the car crash, video footage captured the Hyundai Elantra fleeing the scene and continuing northbound on Slauson Avenue towards Culver Boulevard as it was being followed by the Infiniti G35.

It is unknown which cars were involved in the 2nd shooting or if the occupant(s) of any of vehicles were struck by gunfire. Detectives did confirm that the apartment occupants were not struck by gunfire. The hit and run car crash left the truck owner, a long time Del Rey resident and sole provider of a family of five, without means to support his family.

Suspect Vehicle 1 is described as a Blue 2014 – 2016 Hyundai Elantra with exterior neon lights and extensive damage to its front fender.

Suspect Vehicle 2 is described as a Silver Infiniti G35 Sedan or similar with possible collision damage to the front fender.

Suspect Vehicle 3 is described as a small White SUV or crossover style vehicle.

Suspect Vehicle 4 is described as a Black 4-Door Sedan.

It is requested that any individuals who may have witnessed or have information regarding this incident, please contact Detective Jurado at (310) 482-6369 or at 32284@lapd.online. During non-business hours or on weekends, calls should be directed to 1-877-LAPD-24-7 (877-527-3247). Anyone wishing to remain anonymous should call the LA Regional Crime Stoppers at 1-800-222-TIPS (800-222-8477) or go directly to www.lacrimestoppers.org. Tipsters may also visit www.lapdonline.org and click on “Anonymous Web Tips” under the “Get Involved-Crime Stoppers” menu to submit an online tip. Lastly, tipsters may also download the “P-3 Tips” mobile application and select the LA Regional Crime Stoppers as their local program.

By Yo Venice Staff December 3, 2021
in Crime, News
Related Posts