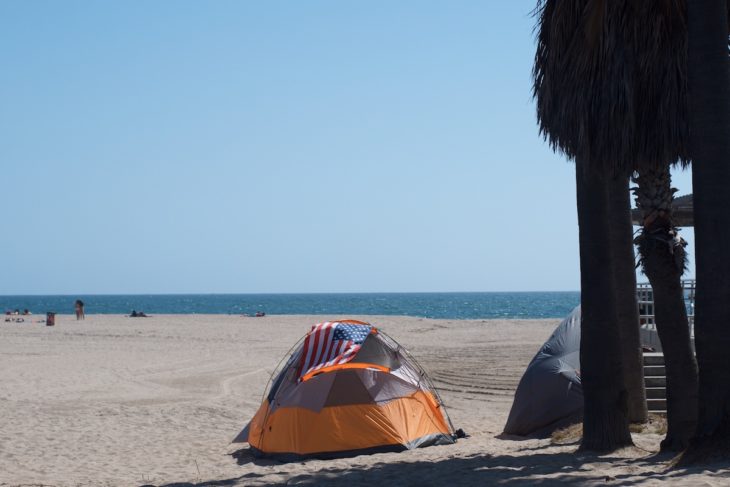 This code states that “No person shall obstruct a street, sidewalk, or other public right-of-way: by sitting, lying, or sleeping, or by storing, using, maintaining, or placing personal property, in a manner that impedes passage… and no person shall: sit, lie, sleep, or store, use, maintain, or place personal property, in or upon any street, sidewalk, or other public right-of-way within the distance stated on the posted signage (up to a maximum of 500 feet) of a property designated as a sensitive use. For a property to be designated as a “sensitive use,” the property must be a School, Day Care Center, Public Park, or Public Library.”

This resolution has designated the locations of 711 N. Alameda Street, 310 N. Main Street, Ill E. 1st Street, 125 Paseo De La Plaza. In the resolution, these areas in downtown LA are named as designated shelters, a day care center and a public park.

Meanwhile, the Westside Regional Alliance of Councils or WRAC has proposed a motion that recommends that LA City Councilmembers Mike Bonin, Paul Koretz, Nithya Raman, and Mark Ridley-Thomas cooperate and consult with the member city councils in their respective districts to request enforcement of the anti-encampment ordinance as soon as possible. Two of these city council members, Bonin and Raman, are the only city council members to vote no on the anti-camping ordinance. It would seem that Councilmember Koretz has already sided with WRAC and the other city council members on the issue, since he co-sponsored the resolution to clear the areas in Downtown Los Angeles along with the other five co-sponsors.

This motion from WRAC reads “urges Councilmembers representing WRAC Member-Councils to consult as soon as possible with their respective WRAC Member-Councils for input as to the designation of sites within their districts for enforcement…when public health, safety or welfare is served by the prohibition designated facilities opened after January 1, 2018 that provide shelter, safe sleeping or safe parking to homeless persons or that serve as homeless services navigation centers or any locations in public rights-of-way for which there is documentation of a ‘particular and ongoing threat to public health or safety’. No enforcement action shall be taken unless the individuals have been offered shelter and have refused the offer.”What will happen regarding LA City Council Member Mark Ridley Thomas is up in the air, since he was hit with federal corruption charges this week stemming from his time as an LA County Supervisor.

By Yo Venice Staff October 21, 2021
in News
Related Posts