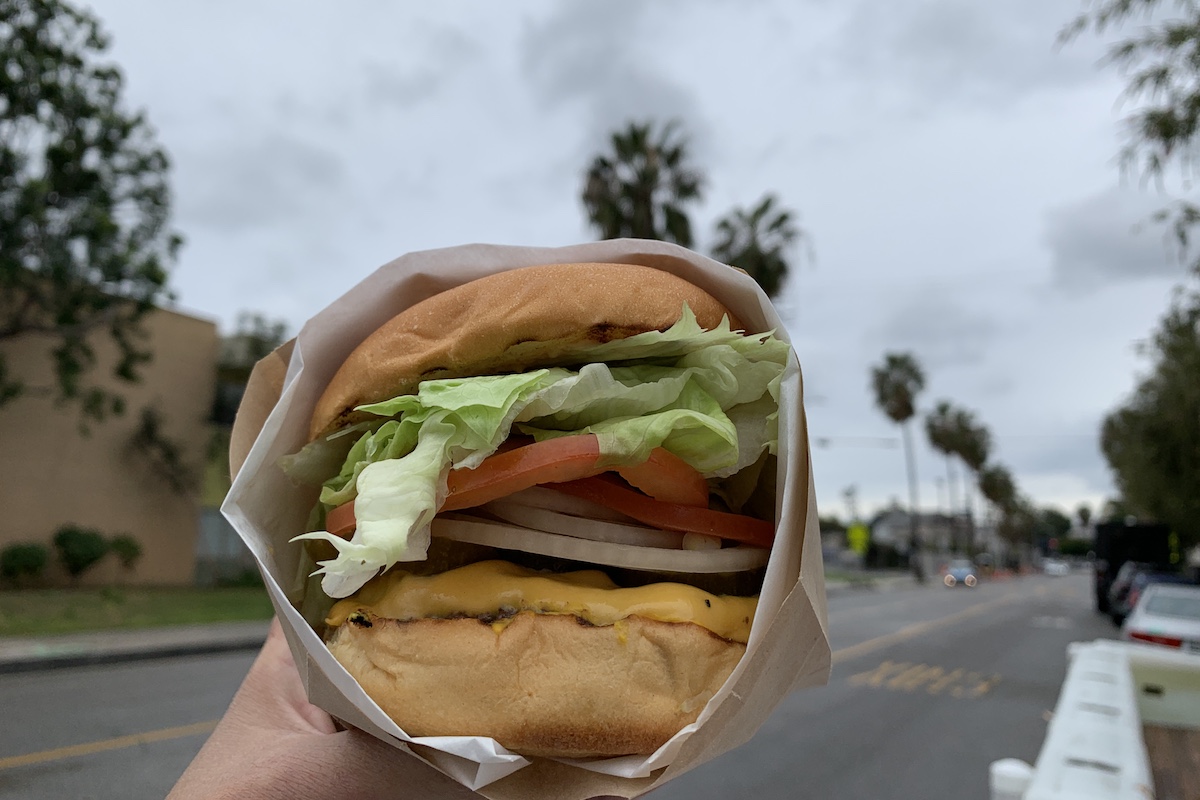 Checking in at Adrift Burger Bar

I, like so many, have fond memories of eating burgers as a child. A Michelin-starred chef’s new Venice restaurant taps into this nostalgia with a burger that may not blow your mind but does most everything that this staple of American cuisine is supposed to do, all for under ten bucks.

During summers as a child, I would have a cheeseburger with the works for lunch every day at camp. It wasn’t gourmet, it wasn’t even hot enough half the time, but still, the American cheese, iceberg lettuce, tomatoes, pickles, onions, tomatoes and beef patty hit the spot every time. The point is that unless the meat is rancid, a classic no-frills burger is hard to mess up. It also can be a piece of culinary perfection, as evident in the Apple Pan or NYC’s Corner Bistro. Recently-opened Adrift Burger Bar (1025 Abbot Kinney Blvd, Venice) may not quite match these titans but still churns out a cheeseburger that a person in the 1940s would approve of for a price that may make you think you’ve time-traveled to the mid-century.

The restaurant offers three burgers: a $7.95 “1940s Classic”, an $11.95 burger with aged cheddar and secret sauce and a $12.95 flagship burger featuring gruyere, parmesan with a tomato ajwan jam. All three burgers are made with 5 oz patties. One can bolster their burger into doubles or triples, add bacon or have it made with “impossible” meat. This review will only focus on the 1940s Classic since a $7.95 burger from a Michelin-starred chef on Abbot Kinney Boulevard is the stuff of dreams.

The 1940s classic burger grew on me. To begin with, I was a bit underwhelmed since the toppings overshadowed the patty. But around a third of the way through I realized I was comparing this to gourmet burgers like Father Office’s and smash burgers like The Win-Dow. Essentially, this is like a really good version of hamburger you would have at a country club, summer camp or backyard grill. While not on the same level as Apple Pan, this is still a super solid burger that nobody who likes burgers is going to dislike, all for an extremely reasonable price. From a taste perspective, there is not much to say: it’s a burger – go try it!

By Yo Venice Staff March 4, 2021
in Dining, News
Related Posts