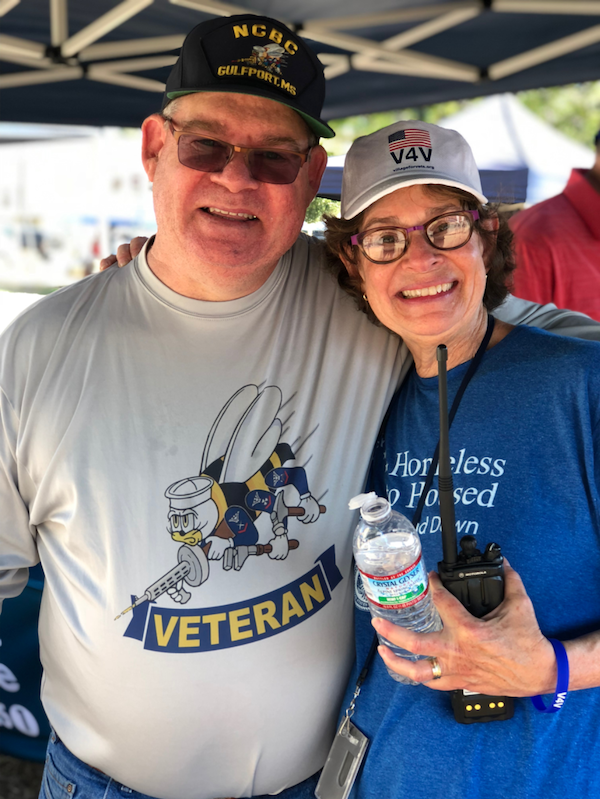 Many of us have watched the city’s response to the homelessness crisis over the years with a mixture of disgust, frustration and general head-shaking.

We have encampments everywhere; new housing doesn’t get built; the housing that does get built can cost as much as $500K per unit; shelters and motel rooms made available to house the homeless go unused.

Officials can’t institutionalize those with serious mental health issues because that is viewed as inhumane or a violation of their civil rights, so the homeless who truly need serious help remain free to harass the rest of us.  Instead of being checked into a mental health facility, they often end up in jail or in hospitals, which are very costly and very ineffective Band-Aids.

So when something seems to actually be working, it’s worth taking a deeper look.

Brentwood resident Marcie Polier-Swartz runs a nonprofit called “Village for Vets.”  She started it in 2016 some time ago, with an initial goal of helping veterans (her family is full of them) and forging stronger connections between Brentwood Village merchants and the adjacent VA.  The VA owns two big parking lots in the area and local commerce depends on them.

There have been many arguments over the years as to what constitutes proper use of VA land by outsiders, but that’s a long story we can address at some other time. Suffice it to say Marcie has wrestled with coming up with win-win proposals the VA and Brentwood Village can both embrace.

Village for Vets has evolved.  In recent years, Village for Vets has Co-chaired, along with the VA, the annual “Stand Down” event that makes it easier for veterans to find services they need, housing, job training, etc.  It’s a great event. And now with Food First, Emergency Fund, Basic Needs and Social Support her programs are indispensable.

And now, in recent months, Marcie and her team have become involved with the CTRS (Community Treatment and Rehabilitation Services) mini-tent village that has been set up on the VA grounds, near where San Vicente and Bringham meet.

The tents on the VA grounds are for veterans only, and, once inside the VA fence, these campers have access to food, water, sanitation, mental health help, medical attention, housing leads, etc. Marcie and her team help facilitate all this, in cooperation and support of the VA.

These campers should not be confused with those on the sidewalk along San Vicente outside the VA fence.  While many of those camping on the sidewalk are veterans, many are not.  Some of the campers on the outside are veterans who continue to protest VA land-use policies (the long story we can revisit some other time).

The encampment outside the fence causes consternation in the immediate area; some residents in the area report being threatened by homeless individuals from the encampment; some merchants say their stores have been vandalized.  Regular cleanup efforts result in tons of trash being hauled away (including used syringes).

Marcie says working with the homeless is challenging indeed, and that this is a problem that can only be solved, one person at a time.  Each individual is different and will respond differently to different approaches.

While that is sobering for those of us who think we need to do something on a much larger scale, there is good news: Marcie reports that every single veteran Village for Vets has helped find housing has not slipped back into homelessness.  That’s a big deal.

The idea of centralizing small tent cities for the homeless in safe areas – on open land, in parks – but off the sidewalks – has always intrigued me.  In centralized locations, food, sanitation, medical care, mental health counseling – could all be provided, all in one place.  This would be the first step on the road to recovery.

People living on the streets will likely never get better.  The daily battle to survive drives out any energy or inclination to seek help.  The longer they are out there, the more they slip away.

So while some think setting up tent cities is cruel, I think the current system – letting everyone stay on sidewalks while the authorities build expensive housing – is maybe the cruelest policy of all.  Many of these individuals will die on the streets; in tents, with access to help, they stand a chance.

Some, even if offered help, would still refuse it.  But if the word gets out these new tent cities are working, maybe the reluctance factor will go down.

I say we follow the tent model everywhere we can.  When we can find permanent housing, great, but we need to do something on an interim basis.

Marcie does things for a lot of good reasons, but in the case of homeless veterans, it’s personal.  Her brother, Brad Zalben, served in the Navy and came home with a pretty serious case of PTSD.  He needed help.  Marcie has been there for him ever since.

Brad’s situation caused her to want to do more.  While intrigued by the need to provide a larger scale solution to homelessness, Marcie says she wants to stay focused on veterans and the social workers who guide them to services.  There is only so much one person can do.

But she’s doing something, and that’s a start – a really big start, if you ask me.  I see huge potential in what she has started here.  For more information about Village for Vets, go to VillageForVets.org. To contact Village for Vets, send an email to info@villageforvets.org.

By Yo! Venice Contributor February 2, 2021
in Westside Wellness
Related Posts