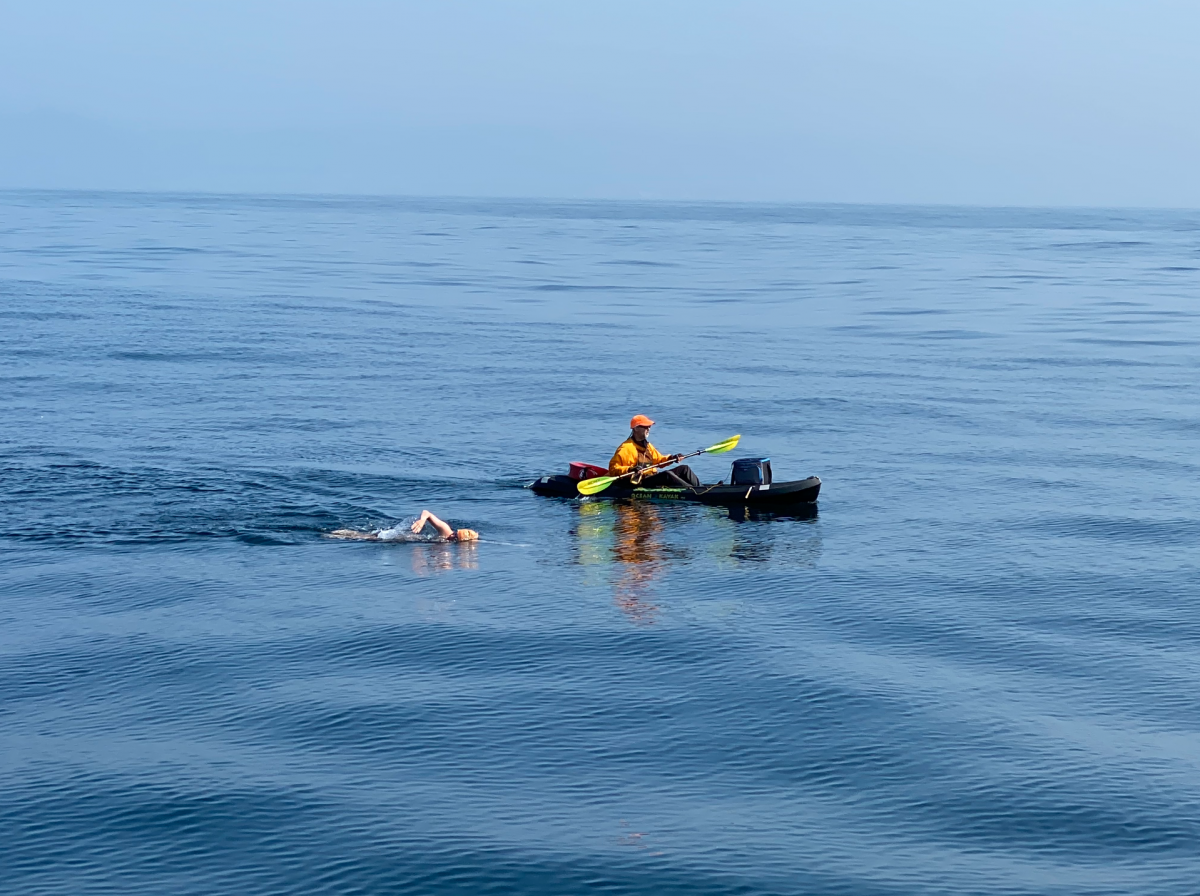 On September 3, Abby Bergman succeeded in swimming solo 27 miles across Santa Monica Bay in 16 hours 25 minutes and 53 seconds. Bergman is only the fourth person to successfully swim the grueling distance from Point Dume in Malibu to Rocky Point in Palos Verdes.

Swimming across Santa Monica Bay is an immense challenge. Obstacles include rapidly changing currents and winds, low water temperatures, curious sea life, and the grind of the ultra-long distance.

Bergman started with an additional hardship; rough 4+ foot swells made the Pacific Star’s journey from San Pedro to Malibu a nauseating 3-hour trip. Bergman battled seasickness and threw up multiple times before jumping in. “I felt so bad I almost didn’t get into the water, but I made a promise to myself that I would at least try. As soon as I hit the water I felt better, and after about an hour of swimming, I was really having fun.”

Jumping from the boat into the 62 -degree waters on September 2 just before midnight (at 11:41:15 p.m.), Bergman swam to shore, climbed out onto the beach and stood waiting – the boat sounded a short burst of loud horn blows, and Bergman entered the surging waters. Once in the water, she began to relax into her swim rhythm and pulled strongly despite the ocean slop.

Bergman swam under a full moon through 24-knot headwinds and choppy waters throughout the night. The kayak accompanying her had to be pulled out shortly after the swim began, as the headwinds made it impossible for the paddler to keep up with Bergman.

The kayaker was buffeted north by high winds; so Bergman and the boat stopped and waited in place for approximately 25-30 minutes until the kayak could get back to the boat and be pulled out. For the rest of the night, Bergman swam close to the port side of the Pacific Star.

Feeds were thrown to Bergman on a rope by one of her crew every 30 minutes; Bergman would stop briefly to eat and drink, and to check before continuing. The full moon made visibility easier for Bergman and crew.

As the sun rose on September 3, winds dropped to a gentle breeze and the ocean turned to glass – perfect swim conditions. The kayak now re-entered the waters, paddled in 4+ hour shifts by Jax Cole and by Dan Simonelli, both experienced open-water swimmers and paddlers.

The rest of the swim progressed smoothly until the end when Bergman had to swim through a thick kelp bed that surrounds Rocky Point in Palos Verdes. Both kayaks assisted Bergman in finding a path to finally reach and touch the rocky cliff face of Lunada Bay. At 16:07:08 p.m. Sept. 3, Bergman had completed her epic swim.

After the swim, Bergman shared “I am sore and really sunburned, but happy and proud that I pushed through!”

A Westside city is adding more miles of protected bike lanes. Learn more in this video made possible by Santa...

After months of negotiations, the City and County of LA reached a $300 million deal to house thousands of homeless...

Heat advisory in effect until 5 p.m. Friday By Sam Catanzaro The National Weather Service (NWS) has declared a heat...

SwabSeq testing platform to be rolled out after FDA approval Scientists at UCLA Health will soon be using a new...

Heat advisory in effect until 5 p.m. Friday By Sam Catanzaro The National Weather Service (NWS) has declared a heat...