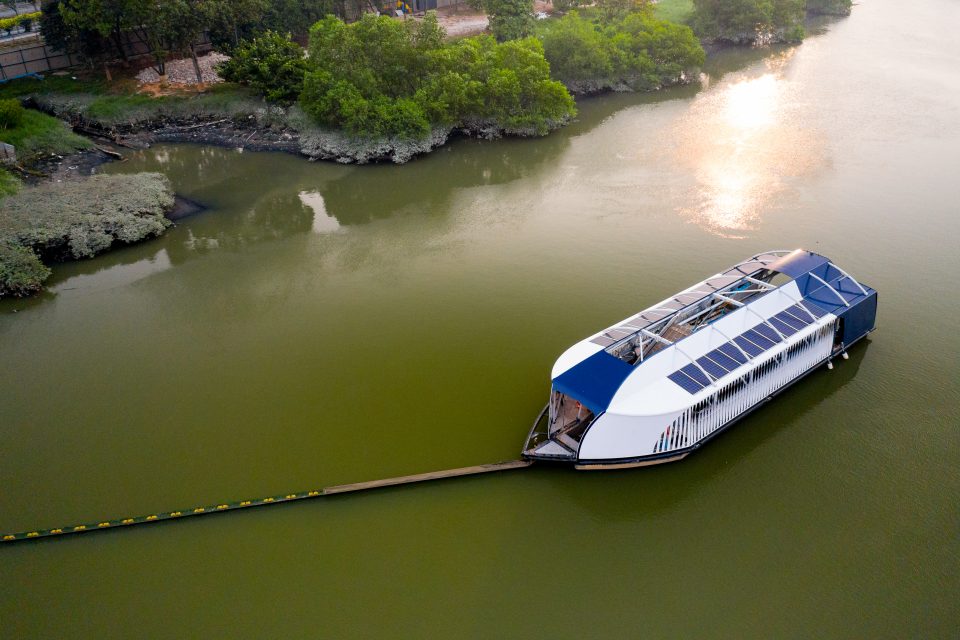 Chair of the Los Angeles County Board of Supervisors Janice Hahn and representatives from the Holland-based nonprofit The Ocean Cleanup will announce a pilot project designed to sharply reduce the amount of plastic, litter and other trash escaping from Ballona Creek. The new technology will be the first of its kind in North America, using solar-power engineering to harvest floating waste and debris from a waterway that empties into the Santa Monica Bay and some of LA County’s most popular beaches.

“To truly rid the oceans of plastic, we need to both clean up the legacy and close the tap, preventing more plastic from reaching the oceans in the first place. Combining our ocean cleanup technology with the Interceptor, the solutions now exist to address both sides of the equation,” said Boyan Slat, Founder and CEO of The Ocean Cleanup.

The autonomous Interceptor is the first scalable solution to intercept river plastic pollution and can be deployed around the world. It is capable of extracting 50,000 kg of trash per day – even reaching 100,000 kg per day under optimized conditions. Only two Interceptors are operating throughout the world in Jakarta, Indonesia and Klang, Malaysia.

Ballona Creek is an 8.8-mile-long channel that provides flood protection to about 1.5 million residents of Beverly Hills, Culver City, Inglewood, Los Angeles, Santa Monica, West Hollywood, Ladera Heights and View Park. During storms, the creek receives an influx of trash and urban runoff from city streets. Although decades of coordinated efforts to reduce stormwater pollution have led to trash reductions, Los Angeles County is partnering with The Ocean Cleanup to mount a “last line of defense” in preventing plastic and other pollutants from reaching the ocean.

Ballona Creek once meandered through the Ranchos of the Los Angeles Basin. During the rainy season, alongside several other small streams, it would be transformed into a torrent as carrying collected water from the basin watershed area to the Santa Monica Bay. It would flood large areas of the Los Angeles basin, and the creek’s course shifted as that flooding carved new paths through the land.

The County of Los Angeles began straightening the creek in the 1920s to protect the growing metropolis from flood damage. In the 1930s, the Army Corps of Engineers carved it into a large channel and lined all but the last couple of miles with concrete to speed the water’s flow to the ocean. An extensive system of drains, mostly underground, was built to funnel stormwater into the creek.

“The transformation of the creek from a natural waterway into a massive stormdrain has broken a link in the ecological chain and severed the connection between the community and the land on which it resides.”

“While these projects were effective in accomplishing the task at hand, the transformation of the creek from a natural waterway into a massive stormdrain has broken a link in the ecological chain and severed the connection between the community and the land on which it resides,” said the Ballona Creek Renaissance. “During dry weather the creek flows with urban runoff; the water level and speed increase dramatically during storms. That runoff contains all sorts of pollutants from our air, yards, businesses, schools, and streets – trash, animal waste, oil and grease, pesticides and fertilizers, industrial chemicals. One often finds large items, such as shopping carts, which have been dumped in the creek. Algae accumulates in some places and graffiti in others.”