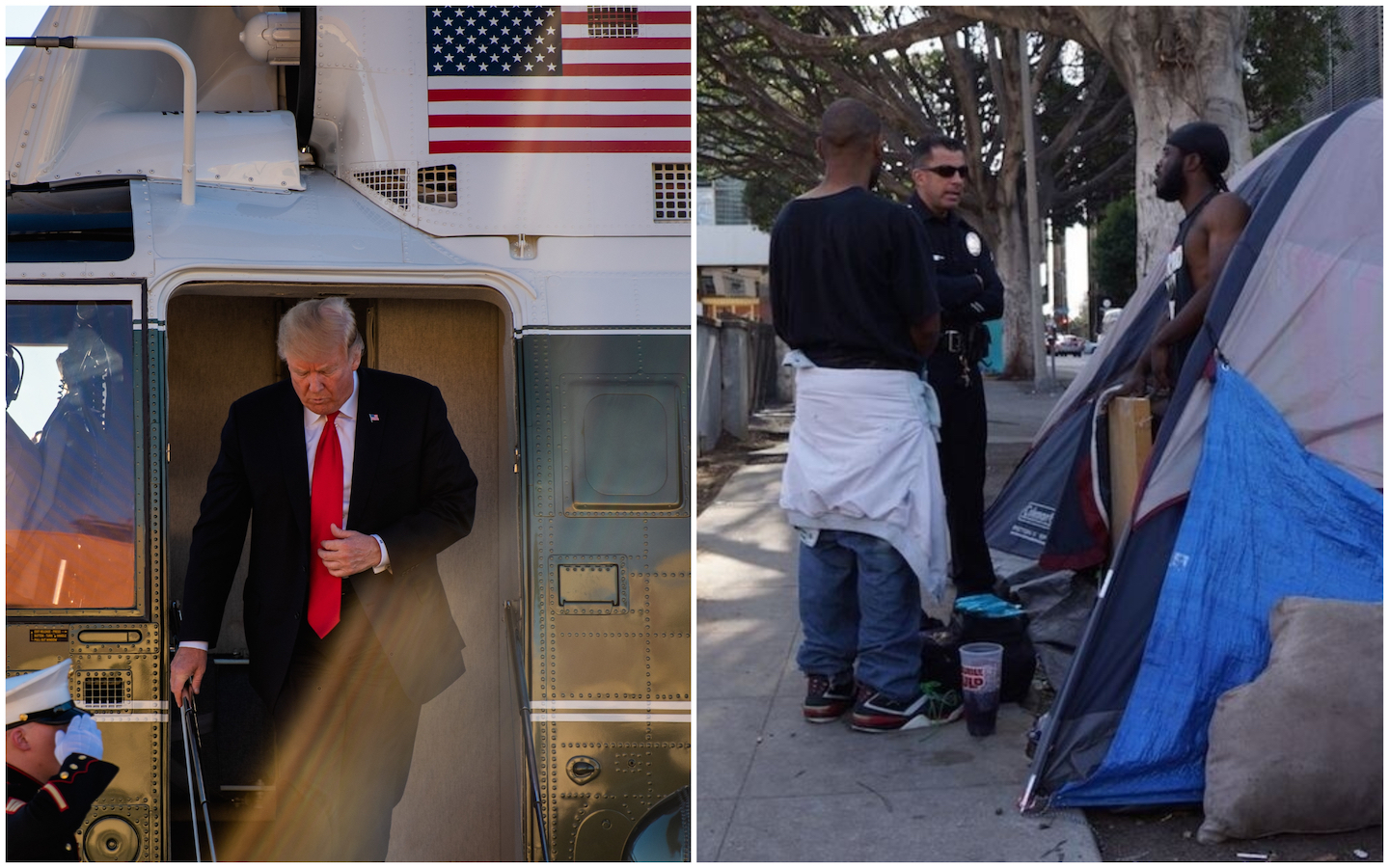 President Trump is expected to be in Los Angeles and the Bay Area Tuesday for fundraisers, just one day after White House economists suggested that increased law enforcement could be used to combat increases in homelessness in cities throughout California.

“Of course, policies intended solely to arrest or jail homeless people simply because they are homeless are inhumane and wrong. At the same time, when paired with effective services, policing may be an important tool to help move people off the street and into shelter or housing,” reads a report from the White House Council of Economic Advisers (CEA), released Monday titled “The State of Homelessness in America”.

In a call with reporters, Acting CEA Chairman Tom Philipson highlighted homelessness in California, especially in the City of Los Angeles, partly blaming recent spikes on state and local policies. According to one administration official, Trump has asked aides to figure out “how the hell we can get these people off the streets.”

White House officials secretly toured unused Calif. FAA facility as they launch controversial plan to relocate homeless. Trump has asked aides to figure out “how the hell we can get these people off the streets.” https://t.co/9jsvGnHeW6

Local organizations serving people experiencing homelessness, however, are asking the president to address the need to provide health care, along with housing, to vulnerable individuals in Los Angeles during his visit to the City this week.

“During his visit to our state, we hope the president will take the time to understand this issue and seek humanitarian and meaningful solutions,” said Elizabeth Benson Forer, the CEO of Venice Family Clinic. “Proposals aren’t enough. Action is needed now. Success will depend not only on funding for homeless programs but on all programs that serve those in need – from affordable housing to the continuation and extension of Medi-Cal coverage.”

President Trump’s visit also comes as moving through LA City Council is a proposal that would prohibit sleeping within 500 feet of schools, among other locations including the Venice Beach Boardwalk and parts of 3rd Avenue near Rose Avenue, two areas where homelessness is especially visible.

Standing in the face of this proposal, and ultimately any solutions proposed by the White House, is a federal court ruling last year in the case Martin v. City of Boise which barred cities from punishing individuals from sleeping on public property unless they provide sufficient and accessible indoor housing.

“If the 9th Circuit’s ruling is allowed to stand then cities will not have the tools they need to prevent a humanitarian crisis on their own streets. We hope the Supreme Court takes this case to restore the power of local communities to regulate the use of their streets, parks, and other public areas,” said Mayor Boise Dave Bieter.