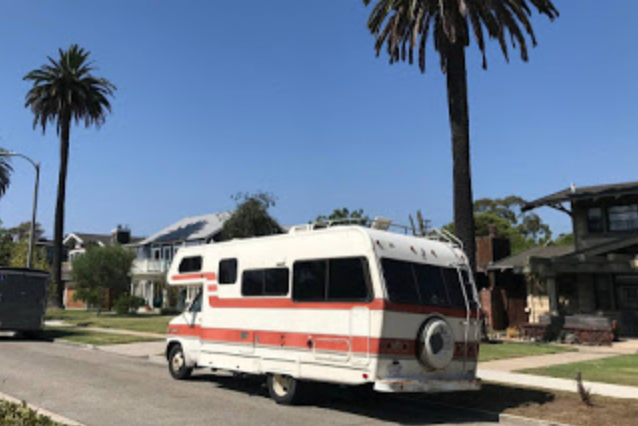 As homeless numbers rise throughout Los Angeles, some in need of housing have turned to the so-called vanlord, Gary Gallerie, for a temporary solution. Gallerie rents out vans parked throughout neighborhoods in Venice for $300 a month, a fraction of the price of what locals pay to live in an apartment or house. With a bumper sticker that reads “Van Life Is Not A Crime,” many of the vans are inoperable and parked in affluent areas.

One of Gallerie’s tenants, Jack, has been renting a van for nearly 3 months in Venice. “You either live in a van or sleep in the street,” Jack said in an interview with CBS news. “It’s a challenge. I work 40 hours a week. I can’t afford to live around here. I’m trying.”

As of December last year, approximately 9,000 homeless individuals throughout the City of Los Angeles live in a vehicle.

According to Venice Update, Gary Gallerie has 14 vans in Venice.

Locals complain that the vans are taking up parking spots and that some of the van residents are using planter boxes as a makeshift restroom since the vans don’t come equipped with a restroom.

Vocal against the practice has been Mark Ryavec, President of the Venice Stakeholders Association.

“I’ve seen a young woman in this one last week, and I did mention to her it’s illegal to live in the van,” Ryavc told CBS. “These folks have no place to use the bathroom, and so what we find is that they use our planter boxes as a latrine.”

The legality of living in a vehicle is also a concern among locals. Last year, the Los Angeles City Council unanimously voted to extend a temporary set of rules that prohibit people from sleeping overnight in cars, RV’s and other vehicles.

The Los Angeles Police Department says they’re aware of the issue and are investigating but concede it’s a difficult problem to solve because they have to catch the individual sleeping inside the vehicle during overnight hours in order to issue a citation.

By Yo Venice Staff July 16, 2019
in Westside Wellness
Related Posts