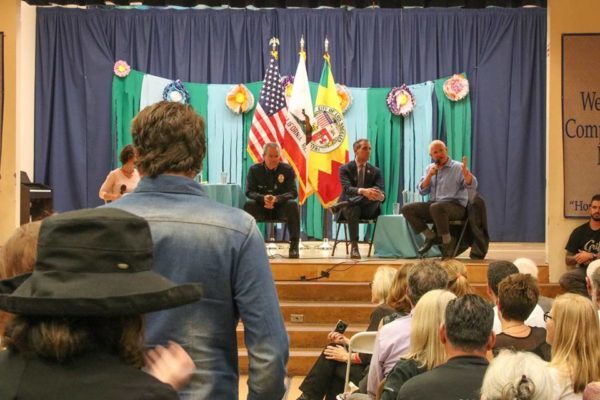 Last week a heated town hall meeting took place in Venice regarding Los Angeles Mayor Eric Garcetti’s “A Bridge Home” program. While the project appears fairly straightforward on paper, it has been met by heated opposition from many Venice residents who feel that the shelter would impact the safety of the community.

The program seeks to provide temporary housing for the homeless in each of Los Angeles’ 15 council districts. While the residents of Venice are not the only ones opposed (with residents in Koreatown, Sherman Oaks and San Pedro showing wariness towards at the prospect), the Venice community is one of those most impacted by homelessness in L.A.

Mark Ryavec, president of the Venice Stakeholders Association (VSA), shared issues that he had with the town hall with Yo! Venice.

“I thought there was a lot of a wasted time,” Ryavec said. “Neither the Mayor nor Councilmember Bonin fully addressed the concerns that were presented by the residents.”

The most common concerns surrounding the issue are that of residents’ safety in proximity to the proposed shelter (which would be located near three schools), and the potential that the shelter has to attract more homeless residents to the area.

“This is a decision about whether we keep people on the streets or take them off the streets,” Garcetti said at the town hall.

Ryavec, who cited his experience as a former legislative analyst for the City of Los Angeles, believes that the coastal development permits required for the project will not be attainable in time for the shelter to be worth building.

“I’ve been involved in many issues for the coastal commission over the years, my projection is it will take them about a year and a half to get [the permit],” Ryavec said. He also shared his concerns that the shelter would have to provide parking for social workers as well as the cars of homeless residents who had previously been living out of their vehicles.

When asked about these claims, Bonin’s chief of staff David Graham-Caso had the following response.

“Given that we have not yet finalized details of the proposed project, his conclusions about the level of required environmental analysis are based on conjecture and his fierce historical opposition to any solutions to homelessness in Venice,” Graham-Caso said in an email to Yo! Venice. “Bridge housing in Venice will of course comply with the Coastal Act — just like everything else in the coastal zone — but the level of review necessary has not yet been determined.”

“Ryavec seems to be opining without knowing the facts,” Graham-Caso added, “as the draft designs presented to the community do not (and never have) included a safe parking program where people living in their cars could stay overnight (though other neighborhoods in the council district have recently supported such programs).”

Despite his feelings that Bonin and Garcetti did not fully address residents concerns over the proposed shelter, Ryavec was pleased by Los Angeles Police Dept. Chief Michael Moore’s announcement that beach curfews will once again be enforced by the police.

“The chief of police announced that they were going to start enforcing the beach curfew at night again and they did,” Ryavec said. “It’s just night and day […] all the cr-p that accumulated on the beach, most of it i gone.”

Despite the opposition from some residents and groups such as the VSA, the City plans to press forward in the process of making the project a reality.

“VSA’s consistent opposition to solutions perpetuates homelessness and causes a proliferation of encampments on the streets and sidewalks of nearly every neighborhood in Venice,” Graham-Caso said. “Through bridge housing, supportive housing, and other solutions, the City of Los Angeles – and many people in Venice – are determined to solve this problem.”

By Yo Venice Staff October 26, 2018
in Westside Wellness
Related Posts