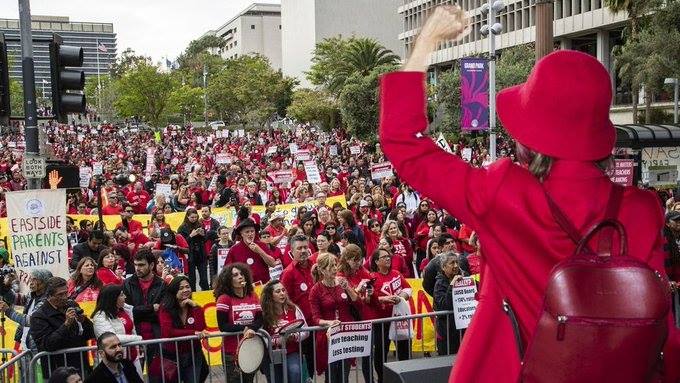 Over 70,000 West LA students stand to be impacted

According to Samuel Gilstrap a public information officer for the LAUSD, there are currently 76,887 students enrolled across Local District West schools who stand to be impacted in a potential strike.

UTLA has been negotiating with the LAUSD for increased pay, smaller class sizes and additional classroom supplies. LAUSD has offered a six percent pay raise for all teachers, counselors and nurses but says that the District simply cannot afford to meet all of UTLA’s demands, which why the union is threatening to strike.

“The district thinks they can buy us off with a modest pay raise, but our fight has never been just about salary,” UTLA President Alex Caputo-Pearl says. “What’s driving educators is the absolute need to fix what we see every day: too many overcrowded classrooms where kids have to share desks, schools with a nurse only one day a week, and overloaded psychologists and counselors doing their best to triage the socio-emotional needs of our students. The school district claims it can’t afford these very basic student needs. We are ready to go to fact-finding and force the district to defend its position.”

According to UTLA, LAUSD’s 2017-18 reserves are $1.863 billion and argue that the state requires only a one percent reserve, yet LAUSD has 26.5 percent in reserves. In addition, the union has taken issue with $416 million in the textbooks and supplies budget was set aside and not spent on our classrooms.

LAUSD, however, contends that the District already has an operating defecit, and meeting all of UTLA’s demands would be fiscally irresponsible and would bankrupt the District leading lead to the unprecedented layoffs of about 12,000 employees, including teachers.

“As the District works to increase investments critical to student learning, it must also address a looming, large budget deficit,” reported an L.A. Unified Advisory Task Force in June. “LA Unified is facing a structural budget deficit – which threatens its long-term viability and its ability to deliver basic education programs. The District’s own forecasts show it will have exhausted its reserve fund balance by 2020-21, will have a budget deficit of $400 million in 2020-21, and therefore be insolvent.”

In addition to high wages, smaller class sizes, the teacher’s union is also taking issue with Los Angeles’ charter industry, which they claim drains nearly $600 million from LAUSD public schools. Plus, UTLA has taken objection to the amount of testing students within the district have to take.

“LAUSD spent $8.6 million on tests not required by state or federal government and millions of dollars more with outside testing companies, including $23 million with the for-profit company Amplify Ed,” UTLA said in a statement. “By the time an LAUSD student is 11 years old, she will have taken more than 100 standardized tests, compromising a huge chunk of student learning time.”

Last week, in the mediation between the two sides, the LAUSD filed an unfair labor practice against UTLA for refusal to participate in good faith procedures.

“By UTLA’s own admission, the only reason UTLA participated in mediation was to ensure that it could move quickly to a strike. UTLA has never negotiated in good faith,” LAUSD said in a statement. “After just one Mediation session, UTLA was seeking to have the Medition process terminated and was openly inciting conflict.”

The two sides are now involved in the fact-finding stage of negotiations. Each side has selected a  three-person panel that will have 30 days to present a nonbinding report. LAUSD will then be free to impose a last offer, and afterward, the union will be free to strike.