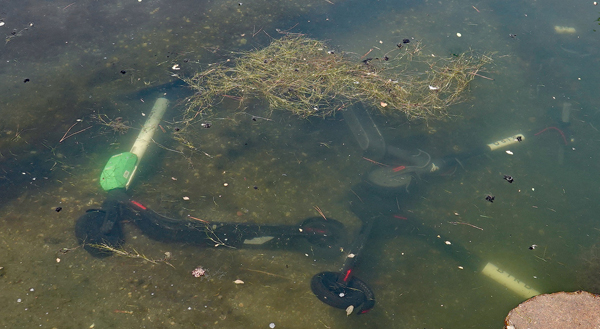 Since thier first appearance, electric scooters have been a hot topic in the Westside. Go just about anywhere in Venice, and you can see that many have been enjoying this new form of transportation. The greater issue, however, comes up when users improperly park their scooters.

This is not the first time that people have dumped scooters in such a manner. Twitter and Facebook posts dating back to the introduction of the scooters show images of Bird scooter buried under the sand at the beach. A Reddit post from June shows a photo of several scooters jammed into a trashcan on the Venice boardwalk, captioned “Birds eating out of trash on Venice Beach.”

Regardless of the various creative ways that frustrated community members dump scooters, the question of “who cleans it up” is one that has been popping up.

According to David Graham-Caso, the deputy chief of staff for Councilmember Mike Bonin, the responsibility for the pick-up and removal of scooters that are considered improperly parked or inoperable falls squarely on the particular scooter company. According to the City’s regulations, the scooters must be picked up within two hours of being reported. However, the City reserves the right to clean up the scooters themselves and fine the company for the cost of retrieval.

“When Bird vehicles are vandalized, it’s like breaking windows in our own neighborhood. We hope that when people see available Birds, they are mindful of our friends and neighbors who rely on our vehicles to get to work on time or make it to their next appointment,” said a Bird spokesperson on how the company plans to combat these problems.

“We encourage people in communities to report incidents of vandalism to Birds, and irresponsible behavior on Birds, to local authorities and to the company. Bird investigates all reports of vandalism and takes appropriate measures, including working with law enforcement and removing people from our platform.”

While these acts of vandalism have spread on social media, Lime seems to believe it is not as big of an issue as it appears.

“Out of the 35,000+ scooters and bikes Lime has across the country, only a few have been vandalized, which is consistent with the low rate of vandalism and theft – less than 1 percent – we experience nationwide,” reads the comment from Lime. “Additionally, all Lime’s bikes and scooters have GPS mapping technology, making it easy to track their location if needed (and in an instance if theft or vandalism was suspected). Lime’s bikes and scooters are also equipped with built in sensors that can track when a scooter or bike has fallen down or if someone is trying to tamper with it. We’re currently working to further develop these sensors to optimize and enhance their ability.

The scooter operators appear to be waiting for the public to accept them as a part of the city’s landscape, and aside from from the few who have been vandalizing the vehicles most people have been tolerant, albeit frustrated. In the particular case of the Grand Canal, the City is working on a way to deter people from dumping scooters.

“We have worked with the companies to create a geofence in the canals,” said Graham-Caso, “which prohibits parking devices nearby in order to reduce the likelihood of this happening in the first place.”

If this particular approach succeeds, it may be a path to a solution for the disrupted community members in the Westside.

By Yo Venice Staff October 17, 2018
in Westside Wellness
Related Posts