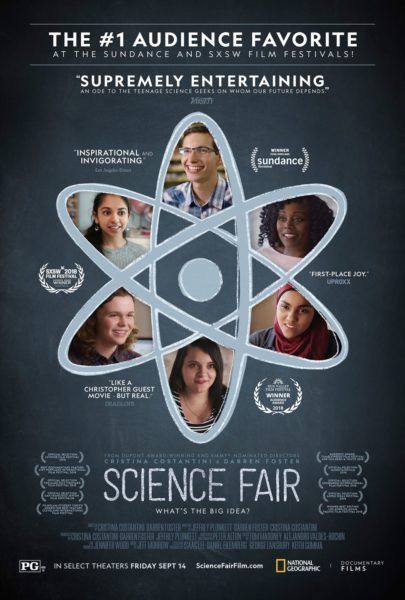 “Science Fair” was written and directed by two groundbreaking documentary filmmakers, Cristina Constantini and Darren Foster and was the winner of the 2018 Sundance Festival Favorite Award. It was also well received at South by Southwest (SWSX) and several other film festivals. This documentary’s concept is truly well developed. The directors follow a handful of teens who grew up in different parts of the world and vastly diverse cultural and economic backgrounds, who are all innovators at the top of their game in scientific fields including medicine, math and engineering. The stories of the teens are so well told that you will feel at the end that they are your friends or your kids, rather than mysterious elite geniuses. From a girl who grew up in one of the poorest towns in Brazil, to several teen scientists from a New York suburb who are mentored by one brilliant science teacher, you become immersed in the story of each one. The narrative in this movie leads up to the biggest science fair of all, the Intel International Science and Engineering Fair, which is held in Los Angeles. Some 1700 teens participate in this yearly event. The film also looks at the trajectory of the careers and successes of some of the previous winners of the fair. As one contestant says, “If you’re there just to win the prize, you’re missing the point of science fair.”

The type of mind which is at once creative and hyper-analytical, that which encompasses the traits of both an artist and a budding scientist, is key to the student who would be able to invent the extraordinary science projects that are featured in science fairs. It’s no coincidence that the same type of creative mind can excel in either science or art. One of the contestants, whose personality radiates “science nerd,” reports that aside from some classical music, his favorite music is Trap Music, which is a style derived from the harsh environment that many rap musicians were born into – a world of poverty and violence. It’s a type of rap music with specific multilayered electronic and instrumental layers and a hard-hitting beat. It becomes obvious that this student does not come from that world. However, it’s not too surprising that a scientific mind would be attracted to that style, as it represents at the same time a world he has not explored and a universal language that exists in his psyche. Music, in his case, is the universal language tying two cultures together. In this movie, you will see that science can act as a similar catalyst.

I hope everyone sees this film, all ages, all countries, all walks of life. The movie shows that the scientist and the artist come with the same creative heart, a heart that can be a bridge between all cultures.

Kathryn Whitney Boole has spent most of her life in the entertainment industry, which has been the backdrop for remarkable adventures with extraordinary people. She is a Talent Manager with Studio Talent Group in Santa Monica. kboole@gmail.com

By Yo Venice Staff September 23, 2018
in Westside Wellness
Related Posts