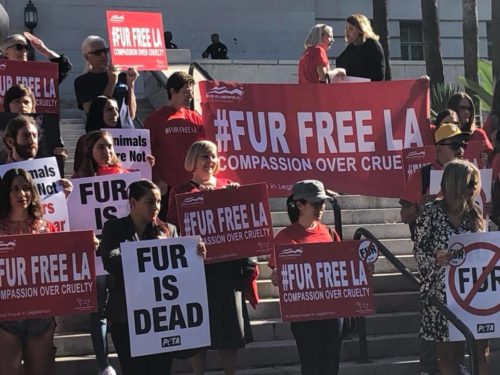 With warm temperatures year-round and ample sunshine, rarely is wearing fur a necessity in Venice. Still, fur fashion accessories remain a popular item of clothing for many in Los Angeles, but soon this may change.

On Tuesday, September 18, Los Angeles City Council passed a bill that instructs L.A. City Attorney Mike Feuer to draft legislation that would ban the manufacture and sale of fur products within the City of Los Angeles, starting in 2020.

“Breeding and killing animals solely for their fur is no longer acceptable in the 21st century. By eliminating the sale of new fur products, Los Angeles has the opportunity to promote a community awareness of animal welfare and to continue to lead in the field of progressive animal welfare reform,” wrote L.A. City Councilmember Bob Blumenfield in the motion passed Tuesday.

Los Angeles City Councilmember Paul Koretz, who represents much of West L.A. and was one of the bill’s sponsors, was quick to celebrate the bill’s passage in a Facebook post.

“We did it! Today my City Council colleagues voted unanimously to ban the sale and manufacture of fur in the City of LA as of 2020! We’re excited to bring an end to a cruel and inhumane practice,” Koretz wrote.”Thank you to Councilmember Bob Blumenfield and Councilmember Mitch O’Farrell for your leadership and partnership in our mutual commitment to make LA a more humane city.”

Westside resident Diego Gavilanes also shares the view that Los Angeles has the opportunity to set an example for the country with the passage of such legislation. In addition, in a letter to City Council, Gavilanes said that there are many alternatives to fur, that many top designers, including Michael Kors and Gucci, are using as they drop fur from their respective clothing lines.

“The fur that is sold within our city comes from sentient beings who suffer and experience pain,” Gavilanes said. We have the ability to make a wide variety of alternatives, even eco-friendly fashion made from recycled materials. Many of fashion’s top designers are dropping fur from their collections.”

Every year, more than fifty million animals including foxes, chinchilla, minks, raccoon, dogs and rabbits are killed for fur. According to the World Society for the Protection of Animals, eighty-five percent of these mammals are raised and slaughtered on factory fur farms and over the fur industry has often been linked with inhumane practices.

In response to these concerns around the ethics of the fur industry, other California cities such as San Francisco and West Hollywood have also banned the sale of fur. As the second largest city in the country and one of the centers of the fashion industry, the move by Los Angeles carries significant weight, something that animal rights organization People for the Ethical Treatment of Animals (PETA) pointed out in a statement released Tuesday.

“PETA is popping the champagne corks today,” wrote the organization. “When Los Angeles speaks, the world listens, and it’s now the largest and most notable city to tell the world that fur is dead.”

The move by City Council does not ban the sale and manufacture of fur quite yet. The bill passed Tuesday directs the City Attorney Mike Feuer to formulate a law that would render illegal the sale of fur. Councilmembers expect Feuer’s office to complete the language in about a month. This would then be voted on again by the Council and signed into law by Mayor Eric Garcetti. The ban would go into effect two years after it is signed into law.