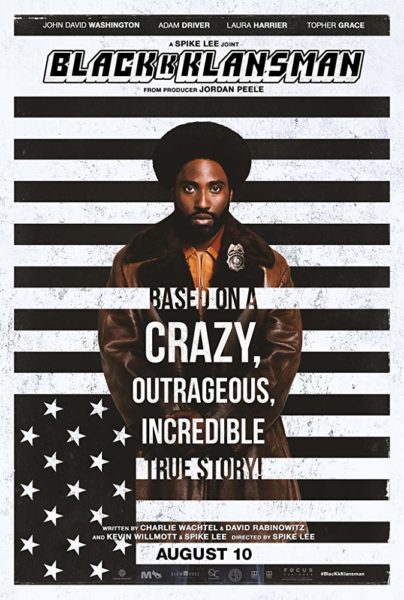 If you haven’t seen Spike Lee’s ‘BlacKkKlansman’ yet, put it on your movie wish list. This is a powerful film based on a true story. It should be required viewing for history classes in our country. The design of the movie is uniquely “Spike Lee Joint,” the name Lee gives his style of cinema, at once colorful, bold and full of direct impact regarding social, cultural and political issues. This film plays like a rap video. It’s “in your face” at times, with dramatic emphasis and comedic banter, set against the straightforward narrative of a true story. The dialogue is the driver of the message and it’s brought home with dramatic effect in the end.

The story follows Ron Stallworth, a real-life black detective who, as a rookie on the Colorado Springs police force in 1979, infiltrated the local branch of the KKK with the assistance of a white fellow officer. When the real Stallworth was asked prior to the making of the film who he would love to play his role in the movie, he immediately answered “Denzel Washington.” The difficulty with making that happen was that the story takes place when Stallworth was in his twenties. Washington, a contemporary of Stallworth’s, is now in his sixties. As luck would have it, Washington’s son John David is not only the right age, he is also a superb actor, now starring in the celebrated TV series Ballers. He also happens to actually look like Stallworth did at the time. The younger Washington was given the role of “Ron Stallworth” and his performance is instinctive, nuanced and on target. The real Stallworth had this to say: “His (Denzel’s) son does a very wonderful job at channeling my 25-year-old essence. I am very proud of John David.”

The rest of the cast turned in solid performances as well and the rhythm and pattern of the narrative keeps you on the edge of your seat. A cameo speech at the beginning of the film by Alec Baldwin as a white supremacist from the 1950’s is haunting and reminiscent of a Third Reich propaganda film. Corey Hawkins as “Stokely Carmichael” and Topher Grace as “David Duke” recreate convincing inflammatory rhetoric. Harry Belafonte as eloquent activist “Jerome Turner” and Adam Driver as Stallworth’s alter ego who infiltrates the Klan, are both riveting. To Lee’s credit, none of the players are portrayed as perfect. Each shows flaws and mistakes as well as honorable motivations.

The ending will shock you into the reality that exists today. Films such as Triumph of the Will and Birth of a Nation are reminders of the ghastly hate literature of our modern times. A previously unreleased Prince recording, “Mary Don’t You Weep,” plays as the end credits roll. The audience at my screening was intensely involved as this film folded a tapestry of history, human tragedy and decades of social unrest into a riveting and entertaining film.

Kathryn Whitney Boole has spent most of her life in the entertainment industry, which has been the backdrop for remarkable adventures with extraordinary people. She is a Talent Manager with Studio Talent Group in Santa Monica. kboole@gmail.com

46-year-old El Monte man arrested on suspicion of assault with intent to commit rape By Sam Catanzaro Police have arrested...

School of Rock welcomes back students for in-person summer camps offering performance based intensives for musicians of all skill levels....