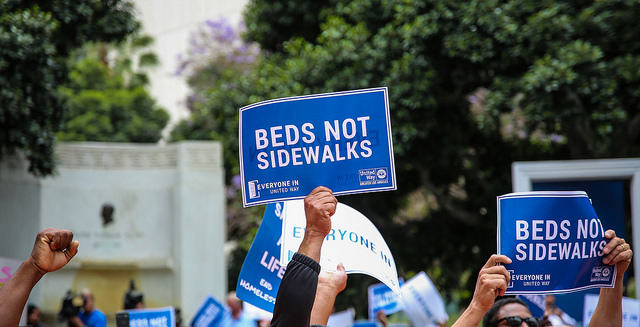 Councilmember Mike Bonin wrote in a tweet over the weekend that after walking door-to-door in Venice with Los Angeles Mayor Eric Garcetti, that he believes a majority of Venice residents seem to support the City’s planned Bridge Housing project at the old MTA lot.

“I walked Thornton Ave, near the proposed temp housing. Majority of residents are supportive & hungry for action. #VeniceSaysYes,” Bonin wrote in a tweet Saturday.

The Bridge Housing project is proposed for the 3.15-acre lot that takes up an entire block between Pacific Avenue and Main Street south of Sunset Avenue. MTA closed the lot in 2015 after receiving multiple offers from developers interested in the site. The property can be used for housing for the next three years,  however, because there is no deal in place.

The proposed project has stirred up some controversy in Venice. While Bonin’s office says that the majority of residents support the project, there are many in the community who are worried that this project will disrupt the neighborhood.

According to VeniceUpdate.net, Councilmember Bonin and Mayor Garcetti were late arriving to the event, avoiding protestors who had shown up at 9:30 to voice their opposition. In addition, VeniceUpdate reported that Bonin’s assessment of the proposed project’s support was inaccurate.

“The Mayor and Councilman Bonin were to arrive at 9:30. Time passed. People were sent to the patio for reception of Mayor and Councilman…Neither the Mayor nor the Councilman had arrived by 10:45. People started to go home,” Venice Update wrote. “The general talk was that people had questions and there were no available answers. Also Venetians did not like the idea of the Bridge Housing being put in Venice.”

Bonin, in another tweet, addressed the opposition and said that his no-show Saturday was in response to protestors attempting to disrupt the canvasing training that was scheduled for 9:30 a.m.

“There is opposition. Some opponents crashed and tried to disrupt the training, & then interrupted us we went door-to-door. We heard their concerns, tried to address misconceptions about bridge housing, and responded to some of the false and misleading information being spread,” Bonin tweeted.