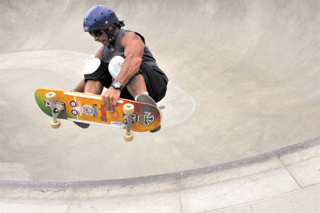 O.G. Skaters Throw the Hammer Down

Saturday July 28, the Venice Beach Recreation Center in conjunction with Skate Park Association International welcomed a full roster of skateboarders to the Venice Skate Park for an afternoon in the bowl. The age range of participants was broad, with women as young as 25, and men over 50 skating, showing off their best grinds, board slides and stalls to a panel of judges. With skate anthems booming from a pop-up sound system, and an emcee following the play-by-play action, the skaters competed in a series of three heats.

While many competitions, from the X-games, to the Olympics, favor youth, the Venice O.G. Skate Jam was an homage to healthy aging, as many of the participants have been skating since the 1980s. Richard Sanchez, who had competed in the 40- 49 division and has been skating since 1983, told Yo! Venice, “it seems like age is definitely tearing the door down and wants me to slow down,” however, his wife encourages him to continue skating. “One thing about skateboarding is that you can’t cheat at it, that’s where truth is told. You fall? Hey you fell.” While shredding his way around the bowl on a Sacrifice skateboard, Sanchez was covered head to toe in protective gear; helmet, pads, handcrafted leather wrist guards, as well as a mouth guard. He advises that younger skaters should wear pads or at least a helmet while skating, “for longevity.” Sanchez had traveled from Northeast Los Angeles for competition, but was no stranger to the other skaters present during the completion.

As the bowl was cleared for the next division of skaters, Eddie Hadvina was a standout amongst the crowd. Originally from Venice, Eddie has competed in the O.G. Skate Jam for the last several years. He currently resides in Ventura. “I grew up skating Dogtown in the 70’s, you know, with all the Z-boys.” The veteran skater admitted that he faced issues with substance abuse, “we partied so hard back then that I quit skateboarding for a while, so I got clean and sober in 1992 and then in 2000 I started skating again, and I’ve been skating ever since.” At 57 years old, Hadvina was skating in the 50-59 division, and has been a participant since the event’s inception. “The first four years I was winning these things, but now these young guys are starting to turn 50. I’ve got some competition.”

In addition to competing in the Skate Jam, Orlando Welsh emceed the event. “I enjoy skating because it makes me feel young and it is good exercise,” he stated. Welsh, who has been skating for more than 30 years fell during each of his 45 second heats, but was in good spirits nonetheless. “Never stop, you get old when you quit skating.” Welsh who had traveled from Palm Springs for the event cited that he has a mini ramp in his backyard. During the jam he hyped up the crowd with wit, humor, and a wealth of knowledge about the participants. More than 30 skaters came out for the event, some locals, others from across the Southern California Region.