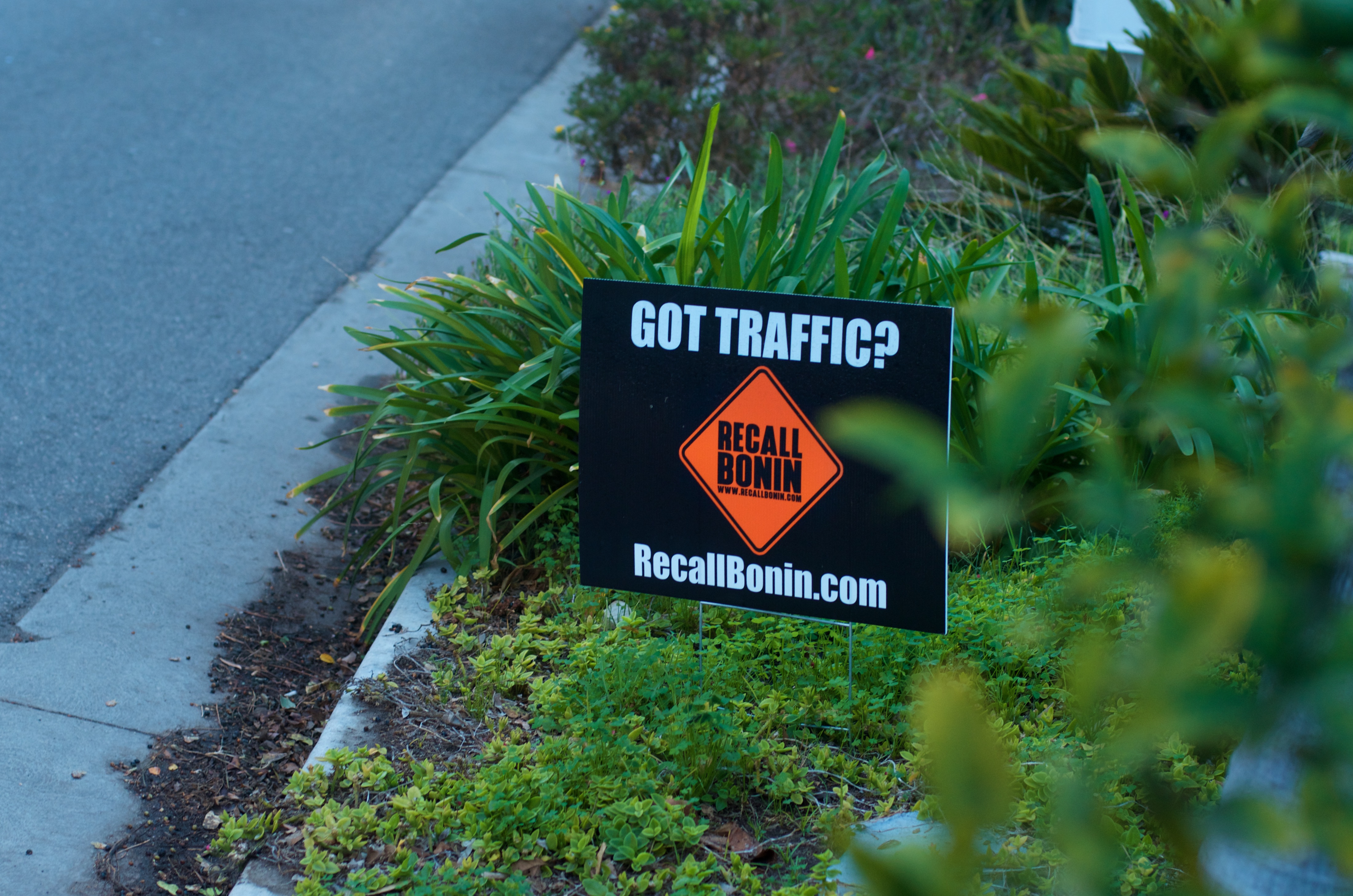 Those in support of Recall Bonin blame the Councilmember for increased traffic in the district. However, now the campaign has hit a roadblock. Yo! Venice political reporter Sam Catanzaro looked into where the money supporting the cause is coming from and whether or not traffic issues drive the attack.

A campaign to recall Los Angeles City Councilmember Mike Bonin is facing setbacks after failing to provide the necessary paperwork to the City Clerk’s office. The Notice of Intent filed by the Committee to Support the Recall of Mike Bonin was missing a signed affidavit confirming that information contained in the Statement of Reason was true. Now the campaign must start the recall process all over due to city election requirements.

“It is both suspicious and unsurprising that the recall proponents refused to sign the declaration that their published statements were true because there were nearly two dozen lies crammed into their less than three hundred word statement,” said Steve Barkan, a political consultant who advises Bonin. “I sincerely hope Alexis drops this misguided effort before he is allowed to scam the taxpayers of Los Angeles out of nearly $2 million on a special election even though Councilmember Bonin was just re-elected with 71% of the vote earlier this year.”

Despite this, the campaign has brushed off these setbacks and plans to continue with the recall effort, claiming that Bonin needs to be held responsible for the increased traffic in the district. Bonin and his supporters characterize the campaign as an attack on Bonin’s progressive record and a waste of taxpayer dollars.

“It’s an insult to the voters, an abuse of the electoral process, and a tremendous waste of taxpayer dollars,” Bonin wrote in a recent press release.

The Recall Bonin campaign now has to file a new Notice of Intent to be approved by the City Clerk. If approved, the campaign will have 120 days to gather 27,000 signatures from voters in District 11.  Once these signatures are gathered, the Clerk will have 30 days to verify. City Council would then have 20 days to set an election date, which has to be between 88 and 125 days from then. There would be a ballot with a “yes/no” selection on whether or not to accept the recall, along with replacement candidates. Bonin could not be listed as a replacement candidate. The recall would be successful if a majority of voters accept the recall. The replacement candidate with the most votes would then assume office.

Bonin is the chair of the L.A. City Council Transportation Committee, and has been at the forefront of multiple programs to reduce congestion and increase pedestrian safety in the district. These include Vision Zero, which aims to reduce pedestrian fatalities, and Measure M, which seeks to bolster the city’s public transit system to reduce traffic flow.

The Recall Bonin campaign is centered around frustration that these pieces of legislation increased traffic and decreased pedestrian safety on segments of Vista del Mar, Venice Boulevard, Culver, Jefferson, and Pershing Drive due to reduced lanes. Edelstein said he reached out to Bonin and when his concerns were not addressed, went forward with the recall campaign.

Bonin’s office, however, says the demands of the campaign were met, pointing to the restoration of lanes in Playa del Rey. Despite this, the Recall Bonin campaign has continued with increased vigor, recently requesting the State Attorney General to investigate Bonin for misappropriation of funds. Edelstein claims that Bonin misappropriated federal dollars that were intended to fund the installation of flashing crosswalks on Pacific Ave in Venice and Vista del Mar in Playa del Rey, as part of a citywide initiative to make dangerous intersections safer. These funds were approved in 2014, yet many of these safety measures have not been installed while multiple pedestrian fatalities and injuries have occurred on these streets.

“Bonin neglected on purpose to do anything on that road, and that cost the life of a 21-year-old male,” Edelstein said referring to the death of Michael Lockridge, who was hit by a car on Vista Del Mar in April.

On October 25, a car hit and killed 40-year-old Damon Shear as he crossed Pacific on a crosswalk the Los Angeles Department of Transport determined was dangerous in 2014 and recommended installing flashing beacons to improve safety.

Bonin’s office says that “red tape” is preventing these flashing intersections from being installed. Tim Fremaux, a City Transportation Engineer, wrote to Yo! Venice recently, confirming this.

“It is mostly a series of procedural requirements set forth by the Feds in order for us to spend these dollars; it includes environmental clearance, getting formal authority to construct all 46 locations, and then going out to bid and having a contractor construct them,” Fremaux wrote.

The relentlessness of the Recall Bonin campaign despite having their issues addressed has caused some to question the campaign’s motives.

“It’s highly unusual for them to be pursuing this when it appears that most of their concerns are, if not all, have been addressed. I question whether there are other motives involved,” Barkan said.

From Venice residents to progressive organizations like the Sierra Club, Bonin is seen as one of the more progressive members of City Council. He has been at the forefront of efforts to raise the minimum wage to $15 an hour, getting the city to 100% clean energy, and housing the city’s homeless population caused some to question whether there is an alternate agenda behind the campaign, citing links between Edelstein and California’s conservative base.

In July, Edelstein appeared on conservative AM talk show “John and Ken” to promote the recall campaign, and the show continues to support the recall effort. John and Ken have been linked to the alt-right, and a 2011 UCLA study found that John and Ken’s content qualified as bonafide hate speech.

More evidence linking Recall Bonin to conservatives lies in their staff. In November, Recall Bonin posted on Facebook that they were “in communications with Theresa Hong, guru behind Trump’s social media coup.”  Furthermore, the Recall Bonin’s treasurer, Thomas Montgomery, is a life-long Republican and Chairman of the California Republican Party’s Country Treasurer Associated. Edelstein says that Montgomery was the only person he could get to fill the job.

“Our treasurer is Republican because nobody in the Democratic Party would talk to me,” Edelstein said, “They don’t want to latch onto a recall of the machine because they know that the blowback will be terminal for them.”

Arturo Flores, a campaign staffer for Antonio Villaraigosa, worry that instead of attracting progressives, the Recall Bonin campaign has mobilized a faction of the conservative base. In August, Flores wrote an article on Medium, highlighting Edelstein’s participation in the “lock her up” chants at the Democratic National Convention, and questioning whether the campaign was receiving dark money from the oil and gas industry frustrated over Bonin’s anti-fracking efforts.

Echoing these concerns, writer Margaret Davis wrote another article for Medium, dubbing Edelstein “alt-right Alexis” while accusing him of leading a “war to destroy progressive leaders”.

Yo! Venice looked into these allegations and found that according to The California Fair Political Practices Commission (FPCC) and Federal Election Commission (FEC) data, a majority of Recall Bonin donors with a clear political preference were Republican (62%), indicating that the campaign has to an extent attracted conservatives.  Furthermore, FEC data indicates that a small group of five prominent Recall Bonin donors have given over $500,000 to G.O.P politicians over the past decade, including President Donald Trump.

Edelstein cites this as evidence that his campaign goes beyond partisan lines.

“To mobilize anyone is a positive,” Edelstein said. “The reality is that you run in a non-partisan election, so there is no D or R next to your name.”

Others, however, are not convinced, pointing to Edelstein’s recent actions as reason to be concerned about the campaign.

“Given Alexis’ own history of anti-progressive positions and statements, it is no surprise that he is relying on the alt-right and Trump acolytes in this effort,” Barkan told Yo! Venice.

In addressing the recall campaign, Bonin is more focused on the fact that he got 71% of the vote in a district with the greatest voter turnout, rather than attacking the record of Edelstein.

“Earlier this year, hundreds of us spent months knocking on doors, talking with voters, and winning a 71% mandate in March for a positive agenda for our city and for our neighborhoods,” Bonin wrote. “Sometimes I’ll get it right, and sometimes I’ll get it wrong and correct course — but I will never be reluctant to tackle our most serious and intractable problems.”