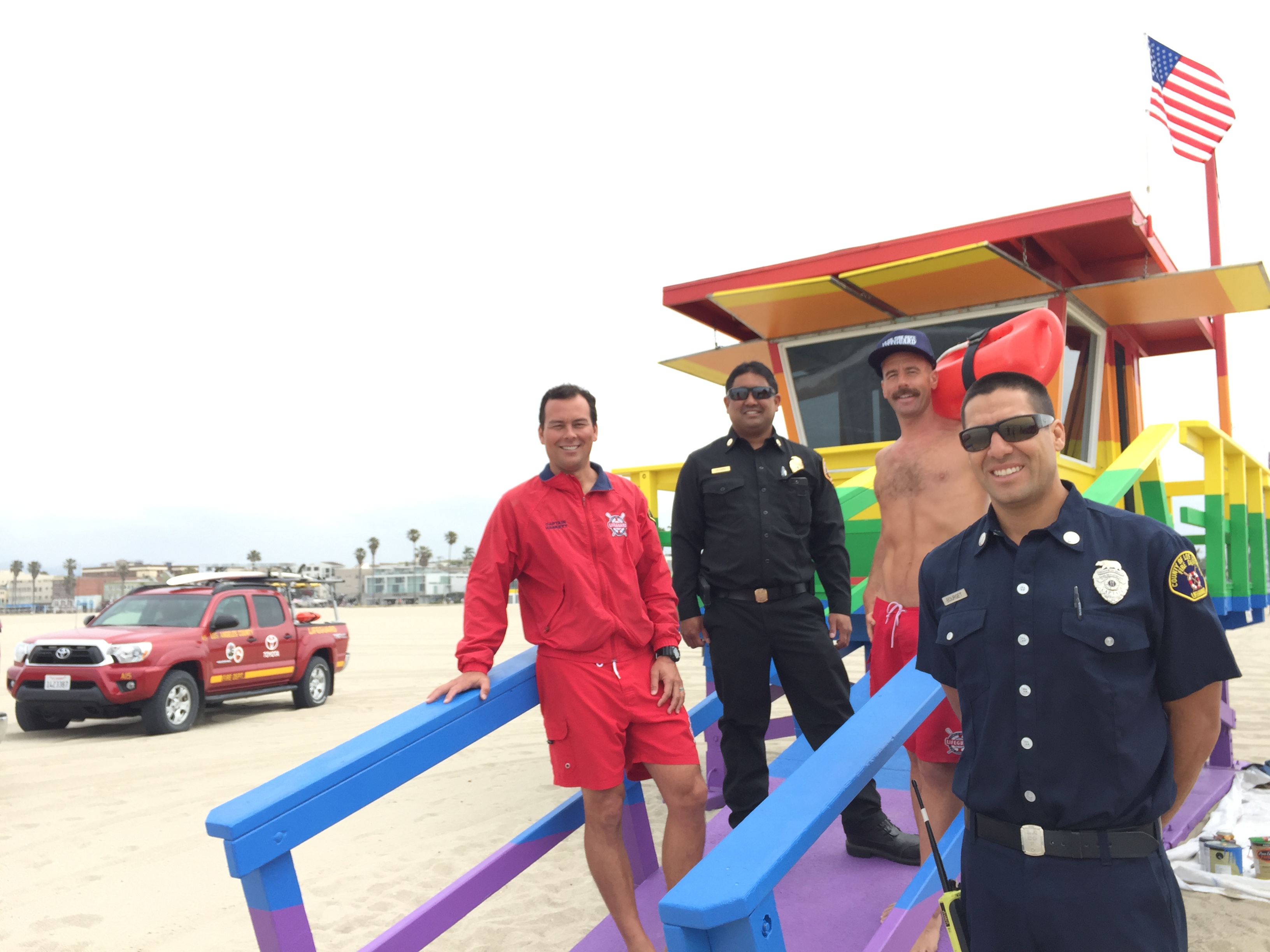 The Venice Pride Flag Lifeguard Tower stands on the beach at the end of Brooks Avenue. The unveiling was a special celebration to kick off Lesbian, Gay, Bisexual, Transgender, and Queer (LGBTQ) Pride Month in Venice.

“You get a lot of tourists from all over the world, so it shows a sense of openness. It’s kind of an open arms to all of the people around here,” said LAPD Pacific Division Beach Patrol Officer Soliven of the tower.

Venice artist Patrick Marston and his husband Michael Brunt were responsible for bringing the rainbow to Venice Beach, pulling out their paintbrushes to transform the Lifeguard tower from its traditional blue to rainbow with the help of local volunteers.

The unveiling ceremony also included the dedication of the Bill Rosendahl Memorial Beach, naming the stretch of Venice Beach, which years before had been Venice’s unofficial gay beach, in honor of Rosendahl, the first openly gay man to be elected to the Los Angeles City Council.

Bonin explained to the crowd the first place Bill Rosendahl lived in Los Angeles was at the corner of Rose Ave., and the beach.

“Bill was the master of the inappropriate, oversharing story so he wouldn’t mind that I told you that he would come down here on a Friday night, late and he might pick up somebody and celebrate who he was and really enjoy and not be ashamed and celebrate everything that he was. Because he struggled for a long time with who he was,” said Bonin.

However, Rosendahl did more than meet up with friends along the particular stretch of the beach that now bears his name. “This location is also appropriate because this is a place where Bill Rosendahl also came out and did outreach to people who were homeless and he literally brought people home and gave them a roof over their head,” said Bonin.

Addressing the crowd gathered on the sand, Kuehl explained while the Venice Pride Flag Lifeguard Tower can today stand proud as a symbol of diversity and equality, the fight to get to this point of acceptance should never be forgotten, especially in the current political climate.

“We’re standing on the shoulders of all the people who’ve done the work before us. People who went through all the trails before us. People who came out years ago and were punished for it and of course in this time when we finally thought that we were safe turns out, given some federal stuff, maybe we’re not. So it’s wonderful to have us all here together celebrating not only diversity but our diversity,” said Kuehl.

As he climbed the ramp of the rainbow lifeguard tower, Wadley told Yo! Venice he tried conversion therapy as a teen. He had gone willingly, raised thinking it was wrong to be gay and led to believe he could be “cured.” “You would never, ever see this in Kansas. To come out here and then come out and work at a lifeguard tower that is a rainbow is kind of amazing…you’ll make me cry,” he said.

The Venice Pride Flag Lifeguard Tower will remain a rainbow is on the beach at the end of Brooks Ave until the end of summer.