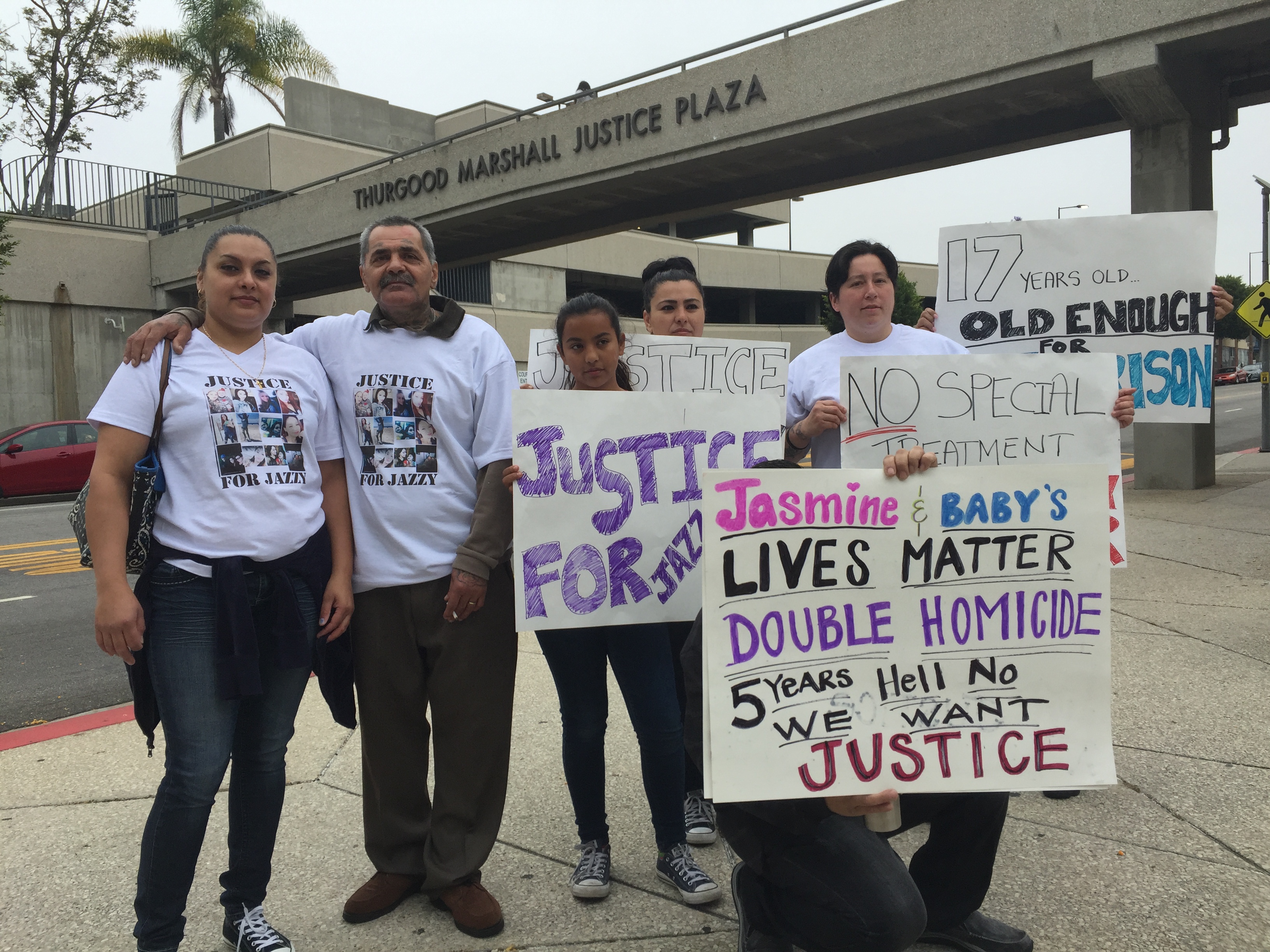 Why Jasmin Preciado’s family are fighting a judge’s decision and what the accused’s father has to say.

The group stood on the side of the road and waved #JusticeforJazzy signs at passing cars.“I’m speaking for her. She’s not here, so we’re here, we’re her family,” said Preciado’s sister Lilia Perez.

Unable to accept Judge Brown’s decision, Preciado’s mother Liz told Yo! Venice, “The lady wants to give her rehabilitation like it’s a drug case.” As another car passed, she called out “Justice for Jazzy!” receiving a honk of support.

“You know I lost my daughter, can never get her back. So we just want justice. I think she deserves to do a life sentence for killing two people, my daughter, and her baby. I mean that’s two people. They do count. Right?” she said.

Venice local Cristina Perez is Preciado’s first cousin and was expecting a visit from Preciado on the night she died. “I told her I’d be right back from work and I waited for her, and she never came.”

Perez told Yo! Venice that when she heard the police helicopter from her home, “My stomach just turned…I had a feeling in my gut that it was somebody related to me. In our Hispanic culture, we have a saying, ‘la Sangre ilama’ which means ‘the blood calls.’”

Half an hour later, after first hearing the helicopters, Perez said she received a phone call, “we rushed straight to Marina del Rey Hospital, and we identified her. It was her,” Perez said fighting tears.

On the night Preciado died, security video captured a group of people fighting, and then three leaving the scene in a black SUV. A car matching the one in the video was found a day later in the 900 block of Millwood Avenue in Venice. However, the police did not find any suspects.

On December 2, 2016, a 17-year-old turned herself over to police at Olympic Division station. She was charged with two counts of murder.

“She’s not guilty of this. She’s innocent,” the girl’s father told Yo! Venice while outside Inglewood Court. Standing away from the protesters, he explained he wanted to come and “stick up for my daughter” who is currently in custody in a juvenile facility. “She’s been locked up for six months,” her father said.

The girl charged with Preciado’s murder, like Preciado, grew up in Venice. Her father, who is a Deputy Grand Knight in the Knights of Columbus and attends St. Mark’s church in Venice explained the families knew each other. “I feel bad for them losing their child, but my child didn’t do it,” he told Yo! Venice.

As for the other two people who left the scene, LAPD Lieutenant John Radtke, Officer In Charge, West Bureau Homicide told Yo! Venice, “Although the suspect left the location with others in a car, only one person has been charged in this case. Investigators have interviewed others, but there will not be any additional people charged at this time.”

Perez said the family worries, being tried as a juvenile, the girl accused of Preciado’s murder faces too lenient a sentence if found guilty.

“We just want justice for Jasmine. You shouldn’t get a slap on the wrist, no matter how old you are, whether you’re 10 or 30, for taking someone else’s life who was carrying a baby,” she told Yo! Venice.

At this stage, the prosecutor is fighting to change Judge Brown’s decision and have the girl charged with Preciado’s death tried as an adult.

Preciado’s family and the accused girl’s father both told Yo! Venice that they want justice. However, for each family, what constitutes justice is very different. “There are consequences to everything you do. So she should be held responsible for it,” said Preciado’s sister Christina.

Arash Hashemi is a practicing criminal defense attorney. Hashemi is not attached to the Preciado case. However, he said that while the American justice system may have flaws, it is “still one of the best, if not the best system in the world. One of the main reasons for this argument is the concept of ‘innocent until proven guilty.’ Meaning, if one is accused of a crime, they are innocent until the Prosecution proves their guilt beyond a reasonable doubt. This remains true in the murder of Jasmine Preciado and only time will determine the fate of the accused juvenile.”

Jasmine Preciado's Venice family protest outside the courthouse in Inglewood upset at the decision to try the girl charged Preciado's murder as a juvenile.

The Venice Neighborhood Council has unanimously passed a motion to advocate for enforcement of a 20 foot safety buffer between...

The fantasy of getting to the Valley from the Westside in under 20 minutes, even during rush hour, is one...