I lost my brother Steve last week. He died of cardiac arrest at 63.

Steve was the black sheep of our family of six children. He did not go to college and struggled to make a living building decks and remodeling bathrooms and kitchens. If my parents had not let him live in a converted garage behind their house in Santa Monica, he would very likely have ended up like many of the folks we see living on the street in Venice – and he certainly would have died much sooner than he did.

From an early age Steve abused drugs, alcohol and food. Although he was from a family of walkers and runners, exercise was not in Steve’s vocabulary. Alcohol and food exacerbated his late on-set diabetes, required three-times-a-week dialysis for the last 11 years and led to the loss of his eyesight in his early fifties.

He had been living in an assisted living facility in Culver City when he paused to sit down in the lobby, passed out and never woke up.

His life was not without laughter, love, pleasure or accomplishment, though these were rarer after the dialysis started and his sight was gone.

For many years I have looked at the homeless population in Venice as though I was looking at countless Steves struggling with substance abuse, limited skills, and self-defeating behaviors. The human tendency to get stuck, to become habituated, both to addiction and to a status quo, is the dominant thread I saw in Steve and also in those living on the Boardwalk and Third Street and behind Ralphs.

To those who question my sympathy for the homeless, this column is an acknowledgement that my experience with Steve hardened me. Living close to an addict for most of my life made me acutely aware of how easily our “help” is counter-productive and simply enables self-defeating behavior to continue. It also made me see how obstinate a human being can be in pursuing their own destruction. My parents’ enabling of Steve kept him from the street but also kept him from successfully confronting his addictions and a fuller life. A stint in AA was promising but did not last. We all stood by feeling helpless as he descended into renal failure, blindness and loss of mobility.

For me, the corollaries abound in Venice. Public feeding programs at Venice churches and along the Boardwalk invite more homeless here while offering just enough to keep them ensconced on the street. Handing out blankets only makes the campers a little warmer while still living in a dangerous, exposed setting. Providing showers, toilets and a place to use a computer without engagement with a case worker and a path to a bed encourages the camping to continue. Allowing tons of personal possessions to take over portions of Venice Beach and local sidewalks assures the campers stay nearby. Mandating a right to live on a sidewalk further habituates the homeless to being homeless while creating noxious conditions for nearby residents (just as Steve became more obnoxious to those around him as his disease progressed).

The decades-long failure of Los Angeles City and County to devote the funds, services and housing to the un-housed population compounded the nightmare exponentially. Now, Councilman Bonin has presented his plan to help all those who have not been as fortunate as my brother to have a roof over their head. As with the City’s overall plan, it is a grand vision – but also without much funding. Mike’s leftist tradition shines through on each page; he proposes initiatives that salve the liberal conscience but that in some instances will not solve the problems we face.

With two fundamental facts staring Mike in the face, he blinked and defaulted to ideology. The first fact is that if City authorities make it easier and easier to live on the street it will be much harder to get people off the street. Mike exaggerates what the courts have ruled and opposes enforcement options that are still legal, such as returning to enforcement of the City’s “no lying, sitting, sleeping” on a sidewalk ordinance. The second fact is that the longer people are on the street the more habituated they become to it. As the City Council removes almost all vagrancy laws little leverage remains to nudge people into case management, rehab programs, shelters or shared housing. Despite all the lofty goals, the lack of funding and of enforcement in Mike’s plan will condemn most of the more than 1,000 souls now on Venice streets to remaining there.

The most poorly thought out proposal is to turn the Westminster Senior Center into a storage facility for homeless possessions. This location has previously been used as a campground by transients and some of them have relentlessly preyed upon the nearby residents. The LAPD has only in the last year kept the park relatively clear and addressed the crime in the area. Drawing transients to this site on a daily basis will certainly result in renewed camping around the center and in nearby alleys and more opportunistic crime directed at the residents. It makes far more sense to rent warehouse/office space in the industrial strip along Del Rey Avenue between Washington Boulevard and Maxella for use as an intake center for the County’s Coordinated Entry System (CES), with storage – both voluntary and involuntary – as an ancillary element. This location is removed from residences, would draw transients away from the impacted areas on Venice Beach, and offers a site for case workers to enroll homeless into the CES, which tracks and coordinates all governmental contacts with homeless individuals. It also allows social workers to develop and carry-out tailored placements into services, secure benefits and housing. Storage without engagement just leaves folks on the street.

Similarly, Mike’s proposal to re-purpose the Venice median parking lot between Pacific and Dell as subsidized housing for the homeless misses the stated target in several ways.

While Venice is indeed losing affordable housing due to rising rents, the proposed subsidized housing on the median lot will be for those at the very bottom of the economic ladder, not the college students, cashiers, teachers, nurses, security guards, artists, etc., who cannot afford an apartment in Venice. Adding more subsidized housing for the homeless will not address the loss of this type of work force housing in the least.

When asked if Mike had identified any other city parking lots or land in CD 11 for similar homeless housing, Mike’s chief deputy Chad Molnar said Mike “started in Venice because the homeless population is greatest there and (Venice) is losing more affordable housing at a faster clip there.” But Venice already has twice as much subsidized housing per capita as any other community in Council District 11*. It is long overdue for other communities in CD 11 to step up and offer their parking lots for homeless housing to match Venice’s track record.

Venice has a large transient population not because of higher rents in recent years; I bet Bonin’s staff could not find more than ten people living on Venice Beach who were forced out of apartments in Venice by rent increases, which are limited by rent control to 3 percent per year. Venice has this large population due to the beach, sun, drugs, fast food outlets, and most importantly, lack of enforcement and failure to stop the storage of tons of personal possessions along the Boardwalk, which is not allowed, for example, in the park next to City Hall.

The amount of housing required to house Los Angeles’ homeless population is staggering to contemplate and even more bewildering when one considers the time it will take to fund, design, acquire sites and construct it. Whatever units could be built on the Venice median site would be a drop in the bucket compared to the vast number of units that are required. They also would not be available for many years, while the encampments in Venice fester and continue to ruin the quality of life of nearby residents and business owners.

It makes far more sense to take the funds available for that project and master rent apartment buildings in less expensive areas of LA County (as OPCC in Santa Monica does) and operate them as shared housing with four beds in each two bedroom apartment and a case worker on site. This would truly implement the “Housing First” concept and allow the social service agencies in Venice to quickly move some of our campers into housing.

The other nonsensical aspect of using the median site for subsidized housing is that it runs counter to Venice’s need for parking. The one message I heard continuously from the Coastal Commission in our years-long battle to garner overnight restricted parking was that Venice desperately needs an over-arching plan to develop far more visitor serving parking spaces. An automated parking structure on that median lot, with one subterranean floor and two above ground would start to address the Commission’s concern.

Finally, as I pointed out in an earlier column, affordable housing, even for those initially homeless, cannot be built without its own dedicated parking without inevitably robbing parking from Venice residents who now use it. As former homeless tenants improve their lives they acquire jobs, mates, occasionally children, and cars. So, on this site a significant amount of tenant parking will be required, which will cut into either the number of units that can be built or the number of parking spaces left for visitors and current residents. The City can finance far more units on less expensive land inland.

Mike, may I suggest that you give up both the storage use on the Westminster site and the homeless housing project on the Venice median site.  Instead, focus all your attention on enrolling our street campers in the Coordinated Entry System, get case workers working on each and every case every day, fund the agencies that have a track record of master leasing inexpensive apartment buildings wherever they find them, and get on with helping people get off the Boardwalk, Third Street and from behind Ralphs now.

*This information was provided by the City Housing Department to the VNC Ad-Hoc Committee on Homelessness several years ago.

Mark Ryavec is president of the Venice Stakeholders Association. 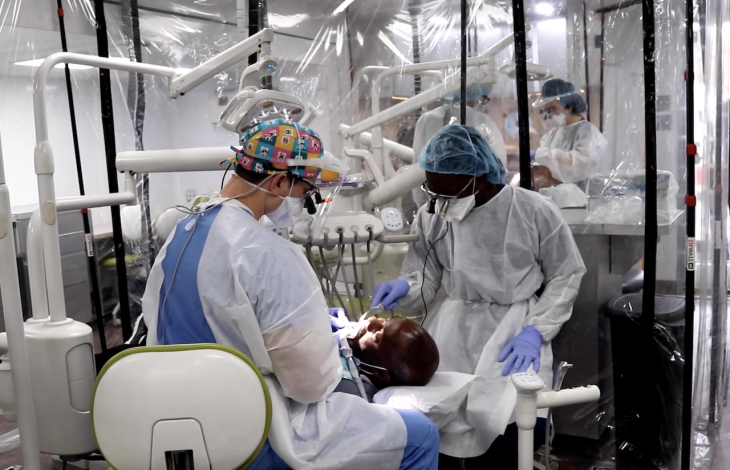 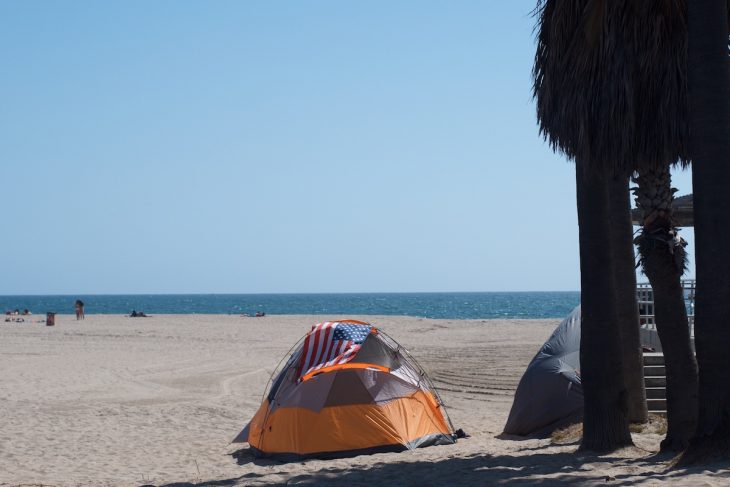 “There is no safe way to gather the 8,000 volunteers necessary,” LAHSA says By Sam Catanzaro The federal government has...

City Council Set to Vote on Vote on Encampment Ban